For hospital where Bilawal was born, cash infusion needed

For hospital where Bilawal was born, cash infusion needed 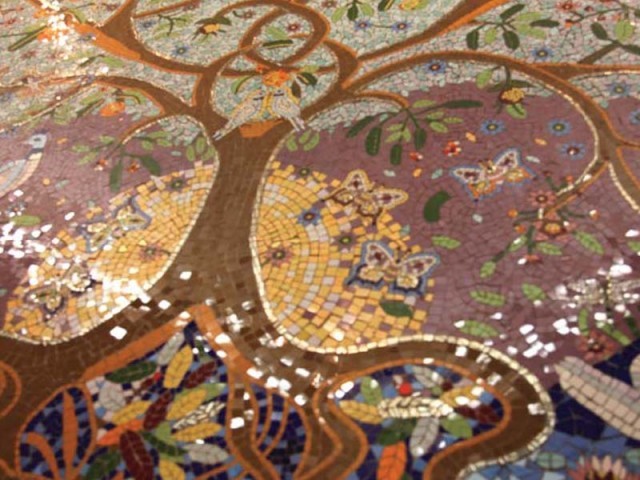 The mosaic was designed and created by Muna Siddiqui and Pomme Amina Afzal. PHOTOS: NEFER SEHGAL/EXPRESS

Supporters of the Lady Dufferin Hospital, which boasts the first labour room in Pakistan, gathered at its Virbaijee Katrak maternity wing for the unveiling of a Tree of Life mosaic dedicated to its long-standing donors, one of whom was the late Benazir Bhutto.

The former prime minister gave birth to her son Bilawal here. The chairperson of the hospital’s board of trustees, Sherry Rehman, who attended the event on Saturday, also delivered a baby girl, Marvi, at the hospital some 23 years ago.

“This is the largest hospital that services women and children for obstetric and neonatal care in Sindh and Balochistan,” Rehman told The Express Tribune. “What I appreciate the most is that the same facilities are offered to a non-paying patient at the hospital as they would be given to…someone like me.”

But the institution seems to be having difficulty coping with rising costs. “Mainly the hospital caters to women from the poor socio-economic class but we have patients from affluent backgrounds as well,” said renowned gynaecologist Dr Faridon Setna who has also been a driving force behind the institution. “We cannot just run the hospital for the poor people on the funds we generate; we are heavily dependent on donations. Even people who work here do so at a pittance.

“The older generation which worked mostly on reduced salaries are now retiring. We need fresh blood to come in. But even there no one is willing to work for anything less than the bare minimum of Rs100,000.” Dr Setna retired two years ago and at the time was drawing Rs15,000 per month from Lady Dufferin.

One of Rehman’s suggestions was an endowment fund. Interest it generates could help run the hospital. “Benazir Bhutto gave the first big donation as a start-up through which many renovations were done. Now we need another similar start-up donation. Somewhere around the amount it cost for this building.”

The celebration was also held for the newly constructed wing. This construction is the first phase of a long-term project to renovate and expand the 124-year-old institution. “This smaller structure was the first labour room in Pakistan,” said architect for the new building Tariq Alexander Qaiser. “Now it is used as a waiting room.”

Qaiser wanted to pay homage to the old building but at the same time give it a “new feel.” The stone railings have been replicated in the expansion that towers over the old structure. The arches have been designed in order to maintain a continuity between the two styles. “The language of the building is old but it has been interpreted in colourcrete,” Qaiser added.

The new building has made space for wards and operation theatres and is estimated to have cost Rs70 million. The second phase of the project aspires to another extension, this time a whole new building for out-patient departments. Phase three involves the renovation of the old Edulji Dinshaw building. The final phase includes plans to upgrade the private wards and Shaukat Haroon block.