Midnig­ht in Paris is probab­ly the most satisf­ying Woody Allen film in decade­s.
By Ammara Khan
Published: October 17, 2011
Tweet Email 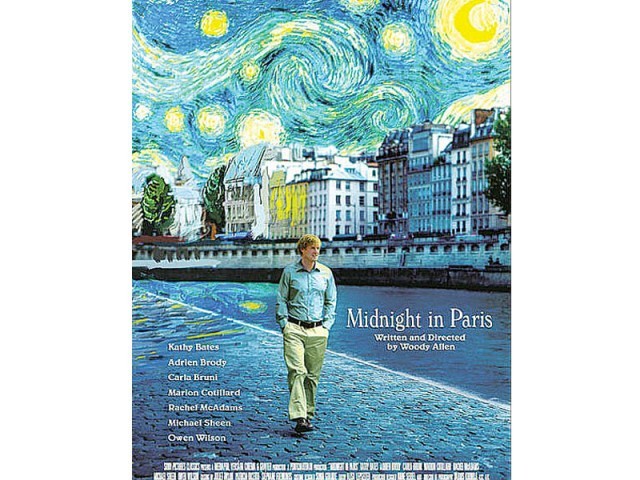 c’est magnifique: time travel in the city of lights.

With its distinct dream-like quality, Midnight in Paris is probably the most satisfying Woody Allen film in decades. Questioning the authenticity of the present and the past, the movie features a journey through time — altering the life of the protagonist along the way. Cole Porter’s music acts a bridge between the ages, bringing the lasting impact of the past into the present and also amplifies the dreamlike cinematography of the film.

Gil (Owen Wilson) is a Hollywood scriptwriter visiting France with his pretty but materialistic fiancée Inez (Rachel McAdams) and her arrogant right-wing parents. A true romantic, Gil idealises literary masters like Hemingway and Fitzgerald and hopes that Paris becomes his muse just as it was theirs. The couple accidently encounter Inez’s college boyfriend Paul (Michael Sheen) and his wife Carol (Nina Arianda) who are also visiting the country. Sheen is fabulously entertaining and annoying at the same time as he plays the part of a the pompous pseudo-intellectual Paul, who is always trying to upstage Gil.

The story then takes a twist: at midnight Gil finds himself in the Paris of the roaring twenties where he meets the Fitzgeralds, Cole Porter, Hemingway and many other leading figures associated with modernism. Slightly neurotic and helplessly nostalgic, Owen does a great job of capturing the confusion of it all. I should admit I wasn’t expecting him to be as brilliant as he turns out to be in this movie.

Some people might point to the lack of originality and depth in the plot as a weakness but I find this light acceptance and repetition of the known quite pleasant. Woody Allen has crafted a movie that is unique with its perfect combination of comedy and the anxieties of a sensitive mind. It does not boast of its intellectualism and instead makes fun of the pedantic treatment of life. Hemingway’s description of Paris as a movable feast proves true yet again for Woody Allen and his career.