Those who mauled our constitutions

Those who mauled our constitutions 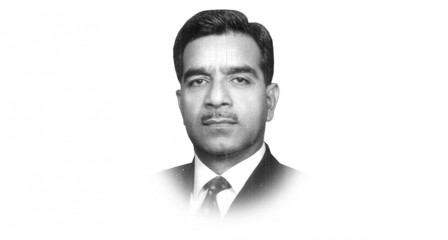 The writer is a retired brigadier and general-secretary of Pesa (masudul.hassan@tribune.com.pk)

Pakistan’s founding fathers wanted the country to become a modern and enlightened democratic Islamic state. It is our misfortune that even after 63 years of existence, we are still probing in the dark to find our correct bearings. It is most unfortunate, in fact tragic, that the main characters responsible for the present state of affairs are those who had taken an oath to protect and defend the constitution of Pakistan. They not only kept derailing the country from the path to democracy but also caused incalculable harm to its integrity and sovereignty.

Under the 1962 Constitution, Ayub Khan ruled the country as if it were his fiefdom. For more than 11 years the provinces did not have elected governments and were ruled through despotic governors. Political and economic deprivation sowed the seeds for disintegration in East Pakistan. He resigned after taking the country to the brink of disaster. Yahya Khan finished the job that was left half way by Ayub. As for General Zia, he hanged the first elected prime minister of Pakistan, brought in extremism in religion and put the country essentially in reverse gear. General Musharraf also overthrew a democratically elected government, and primarily to save his own position. His follies include the Kargil episode, the assault on Lal Masjid, Nawab Akbar Bugti’s murder and our complete surrender to America on one phone call.

Unfortunately, almost all the unconstitutional acts of these self-seeking generals were indemnified and protected by our superior courts and parliaments. When Pervez Musharraf imposed emergency rule and packed off the superior judiciary after the chief justice of Pakistan had refused to resign, a group of retired military officers thought that enough was enough. They formed an organisation called the Pakistan Ex-Servicemen Association (Pesa) whose main purpose was to show to the people of Pakistan that unconstitutional acts of a few generals never represented the views of the rank and file of the armed forces.

Pesa came out with full support for the chief justice and demanded restoration of the judiciary. It also demanded removal of Musharraf and his trial for treason. After the long march was called off, members of Pesa were the first group to reach the chief justice’s house to congratulate him.

At the present time, the country is faced with external as well as internal threats. Institutional corruption is at its highest level, and state institutions that used to be pride of the nation are failing. Poverty-stricken Pakistanis are committing suicides in worryingly large numbers. There is no semblance of rule of law and even in the settled areas poor people are being subjected to unlawful trials through local jirgas.

Members of Pesa have demonstrated in favour of the lawyers’ movement, in support of minorities, women’s causes and have aided internally displaced people. The association also intends to organise a national convention of like-minded organisations and societies with a view to coordinating their efforts to advocate democracy.

Some quarters blame all ex-servicemen for the misdeeds of a few self-seeking generals. This is not justified on the simple grounds that one cannot blame the entire civilian population if some of them order women to be killed by their dogs or if they bury them alive? Likewise, neither political parties nor the judiciary can be held responsible if some of them supported the military dictators in the past.