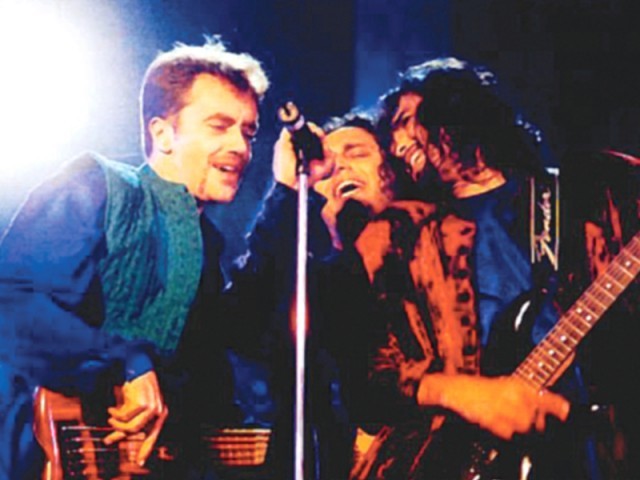 With Junoon’s 20th anniversary on its way, several local and young artists have been invited to revamp the band’s songs for an exclusive 20th Anniversary Album. The upcoming album will be an opportunity for rising artists to flaunt their signature styles globally through Junoon’s platform. Salman Ahmad, Junoon’s stalwart guitarist, researched and then contacted bands and artists through email encouraging them to contribute to the album.

The 20th Anniversary Album initiative will include bands such as Laal, Aag and artists like Bilal Khan, Usman Riaz, Uzair Sultan and many others from the local scene, paying tribute to the band’s songs. “This literally means everything to me. I spent my childhood trying to emulate Ali Azmat’s vocal range and it was Brian O’ Connell who inspired me to learn bassline, so this is like a dream come true,” says Haroon Sheikh from Aag, who will be covering “Mitti” from the legendary band’s album Parvaz. Aag is well-known locally, but has not been able to reach mainstream success despite their hit single “Aag” and a popular cover of Imran Khan’s hit single “Bewafa”.

Sheikh explains that being associated with Junoon means being part of an international brand and being connected with the brand’s legacy. “To let these young artists use the platform is a big deal, because I have seen artists who refuse to share power and try to put a damper on upcoming talent,” states Sheikh, who was told by Ahmad via email that he has heard Aag the band and thinks that they have the passion to represent Junoon.

Twenty-year-old solo artist Usman Riaz, who is signed by music recording company EMI Pakistan, was also invited to perform after Ahmad came across Riaz’s Facebook page. Riaz who has performed for Uth Records and has a single to his credit, is known for his diverse music style which includes classical piano and guitar beats.

“Here is an established musician who feels I’m good enough. I’m not really concerned about fame or recognition but being allowed to recreate Junoon’s music is what I’m grateful for,” says Riaz, who is covering “Saeein” from the band’s 1997 album Azaadi.

Upcoming singer Bilal Khan of  “Bachana” fame has also been requested to contribute his vocals to the anniversary album, which will be a buffet of soulful vocals and music genres. Khan will be singing Junoon’s “Aap Aur Hum” in his signature style while keeping the essence of the band’s music in mind.

Faisal Kapadia, who has lived through the scene in the late 80s and early 90s, says that Junoon contributed majorly in taking pop and rock music to a different level.

He adds that it was a great initiative by Junoon to provide a platform for younger artists. While recalling the Levi’s original music series, which had brought artists such as Bilal Khan and Zoe Viccaji to cover String’s original songs, Kapadia accepts that the project had given a fresh tinge to their older songs.

He further adds that the industry was going through a slump but the recent advent of the digital and internet era has provided more opportunities for artists to be heard. However, currently the depleting economic and security situation is bringing a decline in the music industry again.

“It’s an unfortunate time for people who dream of making music professionally. We have been in the music industry for the last 22 years, so we know that it’s a vicious circle and there is always light at the end of the tunnel,” says Kapadia. On the brighter side, the musician adds that there are now more opportunities for artists to perform and record internationally.

“When we were making our first album there was no concept of performing in India, but then Junoon changed that in 1998. So now, after every four to five years, a new area or opportunity opens up for Pakistani artists,” states Kapadia.