Voter fraud: 65% of votes in Balochistan were bogus

Voter fraud: 65% of votes in Balochistan were bogus 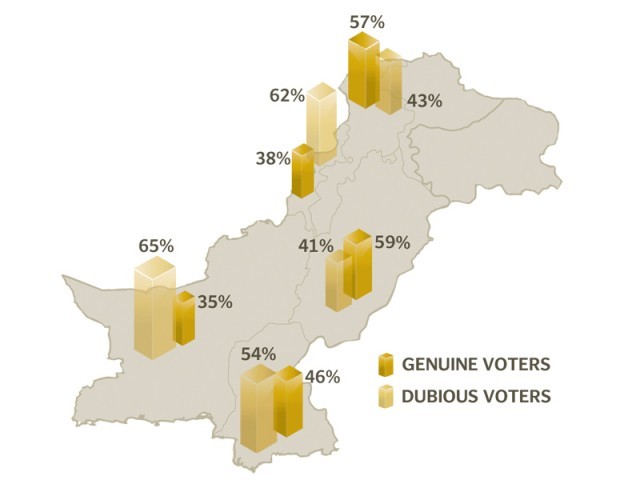 Balochistan had the highest rate of fake voters during the 2008 general election, according to findings from the Election Commission of Pakistan (ECP) and National Database and Registration Authority (NADRA).

The legitimacy of our current government has been severely questioned by recent findings that almost half of the entries in voter lists at the last election were fake.

The startling facts emerged as the ECP and NADRA were preparing new voter lists based on computerised national identity cards (CNICs). Discrepancies emerged between the electoral rolls used for last general election and succeeding by-polls held so far.

The official documents, copies of which are available with The Express Tribune, reveal serious flaws in the electoral system used in the 2008 general election. Among the 81.2 million voters registered, 37 million were either ghost voters, multiple entries or the voter was registered without any authentic proof of identity. The figures for dubious entries were as follows: 65 per cent in Balochistan, 62 per cent in FATA, 54 per cent in Sindh, 43 per cent in Khyber-Pakhtunkhwa and 41 per cent in Punjab.

The 2007 electoral rolls were an updated version of lists compiled by the ECP for elections held in the 90s and 2002.

Statistics from around the country are alarming. Larkana, the hometown of former prime minister Benazir Bhutto, had 484,727 fake entries against 240,762 genuine registered voters who could be verified. The town had a total of 725,489 registered voters.

Karachi had more seats than any other city in the national and provincial legislatures, and a total of 6.6 million registered voters. Only 3.9 million could be verified. A glaring 2.7 million entries had been fake.

Similarly, Lahore, Pakistan’s second largest city and capital of most populous province Punjab, had a total of 3.7 million registered voters. Among them 2.1 million have been declared genuine and the remaining 1.6 million could not be verified.

The findings make uneasy reading for the incumbent national and provincial legislatures. The electoral system has been uncovered as falling well short of fair democratic standards.