Book review: Our Lady of Alice Bhatti - Alice in charya-land

Book review: Our Lady of Alice Bhatti - Alice in charya-land 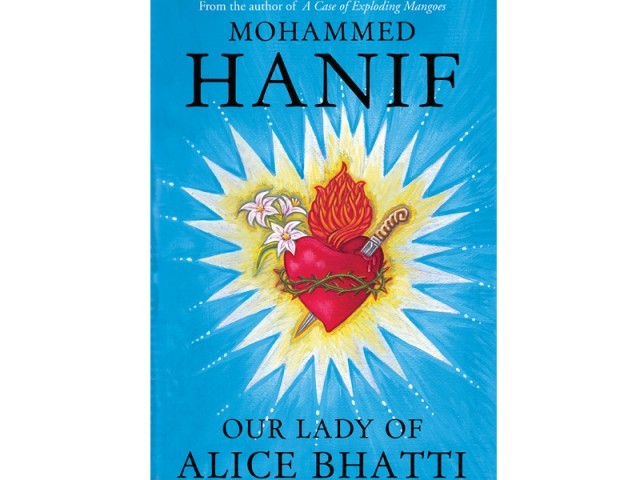 Our Lady of Alice Bhatti is a tale of love, death, bigotry and violence. It deals with life in its raw form and deconstructs it to the very core. It is a love story of Alice Bhatti, a Catholic woman who has just been released from prison and finds a job as a junior nurse at the Sacred Heart Hospital, and Teddy Butt, the former Mr Faisalabad, who works as a part-time extra legal enforcer for the Karachi police. This, however, is just one of the many tiers of the narrative structure of the novel.

Mohammed Hanif’s angry humour doesn’t just question the traditional norms of society, it also undermines the life we have come to accept as ‘normal’. As the novel starts off, the characters seem distant and rather two-dimensional but after a few pages one gets to know them through many unsettling yet humorous revelations. Hanif does not try to write how his characters feel, but instead strives to familiarise the inherently complex strain of human thought process from a safe distance — making it quite difficult for the reader to decide their feelings about these characters till the very end. As for the titular character, Alice Bhatti is funny and dark, arguably Hanif’s best creation. The uneasy humour can be very disturbing at times, but that is the point of the novel; to question, in a very disinterested way, all that is against humanist values.

The portrayal of a three-day violence spree following the firing of a Mauser is one of the many hyperbolic events that, despite their nonsensical overtones, are apt descriptions of the insignificance of human life in our society. You won’t find neat abstracts like cruelty, life, death, love, violence and beauty here — they all spill into one another in a pastiche of human emotions, in a world that resembles the Charya Ward where everything is ‘normal’.

Hanif never seeks to provide psychological insight into his characters. If he did, his novel would have been sublimely tragic but not at all humorous. However, he uses his characters and narrative to expose an entire society in all its complexity and contradictions. In other words, he is a cultural anatomist, employing a vast range of sardonic literary motifs to highlight the hierarchical structure of our society and its inequities.

An episodic narrative that is in a constant state of frenzy and employs a multi-layered dark humour, Our Lady of Alice Bhatti occupies a subtle place between absurdism and social-satire. The characters are in a helpless state of alienation that does not end even with mutual love which serves rather as a temporary escape. A land where weapons are the most effective and easiest way of communication, the characters are not only incapable of meaningful human interaction but are self-estranged too. The inability of various characters in the novel to exist in harmony paints a wasteland where people wallow in their own filth and derive satisfaction from belittling others.

Hanif has created a distinctly indigenous dark humour in Our Lady of Alice Bhatti that has the potential to become an iconic description of not only this generation but the era as well.

10 things I hate about rain