Countr­ywide protes­ts were held on Saturd­ay and shops and office­s were closed in all major towns and cities of the countr­y.
Published: July 4, 2010
Tweet Email 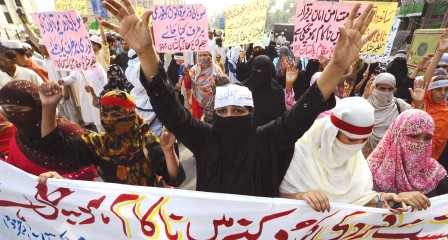 Countrywide protests were held on Saturday and shops and offices were closed in all major towns and cities of the country to mourn Thursday’s twin suicide attacks at the revered Data Darbar in Lahore.

Protest rallies were organised in Lahore and although roads were blocked and tyres were burnt, the protests remained non-violent. Contingents of Punjab Rangers and police were deployed around the Data Darbar complex to keep protesters away from the shrine. All routes leading to the shrine were blocked since Saturday morning and were open only for motorcyclists or pedestrians. The Sunni Tehrik also held a rally at Nasirabad while the rally announced by the Sunni Ittehad Council on Friday did not take place.

Anti-Taliban cleric Raghib Naeemi urged the government to step up its efforts against extremism. “We will continue our protest till the government takes some concrete actions to curb terrorist activities,” he said.

Religious leader Sahibzada Fazal  thanked the people for observing the strike and for holding protests. “Today’s successful strike shows that people hate those who do terrorist acts in the name of religion. People have completely rejected these hired assassins,” Fazal said.

Around 6,000 people rallied in Lahore, shouting slogans such as “death to Taliban” and accusing the provincial government of being soft on militants. The rally dispersed peacefully in the evening.

Most shops at Hall Road, Mall Road, Liberty Market, Icchra, Model Town, Mozang, Abid Market, Anarkali and Township were closed, but those on Jail Road remained open. The shop owners organised funeral prayers in absentia for those killed in the attacks and displayed banners and placards on the roads, condemning terrorism.

Representatives of traders’ unions said they had followed the call for a strike to mark their grief over the attacks on Lahore’s landmark shrine.

General Secretary of the Qaumi Tajir Ittehad, Liberty Market, Babar Ali Bhatti said that most shops were closed and only a few were open. “The traders have shown solidarity with the victims of terrorism and those who opened their shops should be ashamed. I would call them hypocrites,” he said.

But Zafar Iqbal Goraya, general secretary of the Jail Road Traders Association, members of which had opened their shops, said that shopkeepers had protested on Friday and had now opened their shops and had offered prayers for the deceased. “We demand of the government to control terrorist activities in the province. The government has failed to counter terrorism and protect the lives of the people,” he said.

Karachi also wore a deserted look as all private offices were closed. There was thin traffic as commercial activities and public and private transport facilities remained suspended. Three people were arrested for trying to forcibly shut shops and a vehicle was torched. Calls for a strike had been made by Muttahida Qaumi Movement (MQM), Jamiat Ulema Islam, Sunni Tehreek, Sunni Council and Jamaat Ahle Sunnat. The MQM had hoisted black flags and banners in all important areas of the city and at their offices, where they had organised a Quran Khwani for those killed in the twin attacks.

A partial shutter-down strike was also observed in Quetta on the call of the Muttahida Sunni Council and the Jamaat-i-Ahle Sunnat. In the city’s main areas, it was business as usual and most trading and shopping centres remained open. However, shops in Saryab and Quetta’s suburbs were closed for the day.

Sunni Tehrik’s Balochistan chapter held a protest demonstration outside the Quetta Press Club. Addressing the protestors, Sunni leaders Ghulam Shabbir Qadri and Ali Baloch condemned the attacks and alleged that some American elements were involved in the attack and this was all part of a conspiracy hatched against the Muslim World. They demanded that an independent inquiry be conducted into the incident and the culprits must be immediately arrested. (WITH ADDITIONAL INPUT FROM AGENCIES)