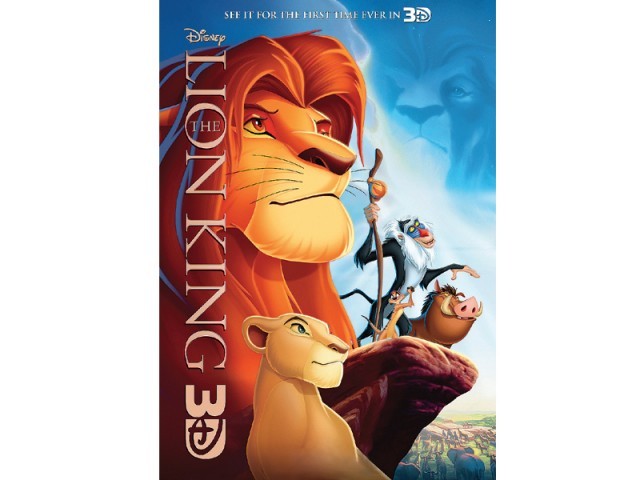 The Lion King 3D gave all the other films a run for their money by making $29.3 million over the weekend. PHOTO: FILE

The Lion King is back on top of the film jungle 17 years after the film first hit theatres. A version of the 1994 Walt Disney animated classic reclaimed the box office throne with an unexpected $29.3 million in domestic ticket sales over the weekend, according to the estimations released by the studio.

The three-day total for US and Canadian theatres was more than double the studio forecasts and easily pushed thriller Contagion (last weekend’s winner) to second place.

The Lion King is one of the most successful animated films of all time, grossing $784 million at theatres worldwide before the 3D debut. It also reigns as the top-performing home entertainment release ever. The story of a lion cub who returns from exile to reclaim his father’s kingdom appealed to parents and grandparents who saw the film years ago and brought their children and grandchildren to see it in a new format, says Dave Hollis, executive vice president for motion picture sales and distribution at Disney. After the success of The Lion King 3D, the audiences are now eagerly awaiting Titanic in 3D, which is scheduled to release in April 2012.

3D films have made the cinema experience more personal and ‘fresh’ for avid filmgoers who were overdosed on the same old format. The culture of 3D films is becoming more and more popular in Pakistan with the launch of Atrium Cinema and Universal Cineplex in Karachi, Cinestar in Lahore, and two ongoing cinema projects in Islamabad, as reported by Capital Development Authority. Film enthusiasts can now sit in the black box and watch their favourite films with cool glasses on.

The trend of 3D films has also accrued new levels of cinema jokes which people now crack over the fact that from Salman Khan to Angelina Jolie, everything can be life-size and tangible. As for the kids, they can enjoy the fact that when Po the Panda does Kung Fu , it seems like they’ll be leaving the hall with a black eye.

(WITH ADDITIONAL INFORMATION FROM REUTERS)