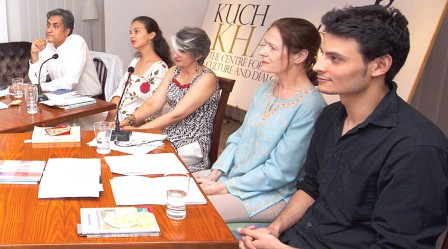 Panellists during a poetry recital at Kuch Khaas. PHOTO: EXPRESS

That this inspiring collection was rendered by a panel comprising Zahir Riaz, Sara Mahmood, Ilona Yusuf, Shazieh Gorji and Osman Khalid Butt, themselves poets and artists of considerable merit, added an effective artistic dimension and authenticity to the proceeding.

Most memorable amongst the selection were pieces like Hashmi’s “To My Love in Another Town” reflecting on the possibilities of meaning through language, Raza’s poignant look at the “faraway games of distant masters” in a country where the personal and the political are difficult to separate, Rafat at his formidable best in “Kingfisher”, Halai’s re-evaluation of life, death, sadness and loss in “Laughter for the Living”, Kureshi’s ability to imbue everything with potential metaphors for something else and Adrian Hussein’s “Srebrenica Video” for its subtle pathos.

The idiom and language of Hamidi’s verse being reminiscent of the classical Urdu tradition lent itself perfectly to a reading of this sort, while Pasha’s technical adroitness and linguistic sophistication brought to life the complexities of our times with a brutal honesty that is rare and hard-hitting. In her deft hands, an A-frame comes across as far more interesting, complex and satirical than it actually ever can be.

Interestingly enough, the selection steered clear of the usual suspects; the mandatory reminder of the horrors of partition or an exploration of the paradoxes of the immigrant identity.

The brief discussion that followed touched upon the age-old question of inspiration vs. perspiration, more aptly aamad  and awurd in Urdu. Participants felt that poetry, having its origin in the oral tradition, can only be preserved in its true essence through more such readings in the vein of Mehfil e Mushairas. The need to highlight the works of poets writing in Urdu and regional languages was also underscored.

There are a number of reasons that make poetry samplers and readings like this so pertinent.  Firstly, to establish how Pakistani poets writing in English deserve as much to be a part of Pakistan’s literary landscape as their counterparts writing in Urdu. That the Facebook generation is not familiar with the work of poets who have been hailed by appreciative audiences internationally is not as much a loss for Pakistani poetry as it is for the generation who remains the poorer for their ignorance.

Moreover the quality of contemporary poetry unveiled at the sampler gives hope that in a time when the golden age of just about everything is ancient history, a new age of Pakistani English poetry might very well be stirring somewhere in the sleepy confines of such recitals.

r��  ���`� frustration when, according to him, the selection of the national team was based on discrimination between people belonging to ‘certain’ ethnicities and provinces.

“There was discrimination. I am a Baloch and the people in the federal board were not huge fans of our community,” Muhammad recalls in his hospital bed.

Since there was no central city in Pakistan where football clubs were established and where footballers could play and earn money, the trend was to hire sportspersons in sports departments of different organisations such as Habib Bank, Wapda, Pakistan International Airlines or Pakistan Railways and so on.

Muhammad was fortunate to be employed in the Habib Bank sports department where he worked till 1980. Later on, he coached the HBL team and after 2000, he refereed for many clubs in Pakistan and then he founded his club, Pulpatti Football Club, in Lyari till his heart disease put a stop to his passionate sports endeavours.

Terror descends upon the Darbar