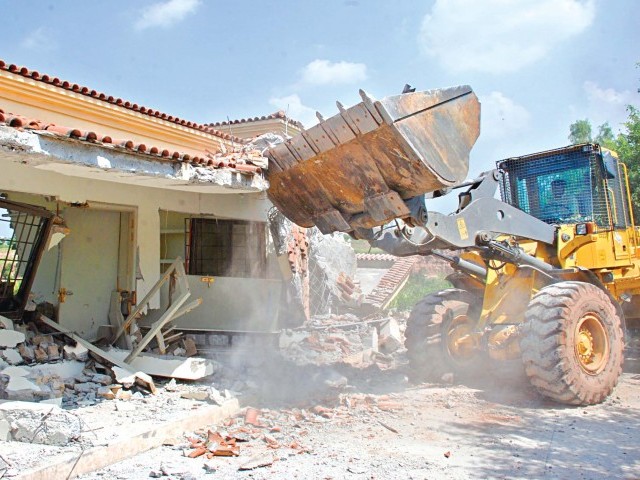 In the operation which started on Tuesday, a CDA bulldozer demolishes illegal construction at a farm in the Orchard Scheme on Murree Road. PHOTO: MUHAMMAD JAVAID

In compliance of the Supreme Court orders, Capital Development Authority (CDA) on Tuesday launched the much-awaited operation against buildings built on the agriculture farms in violation of rules.

In the first phase, 20 farmhouses where the infrastructure in the allotted plots has been built beyond compoundable limits would be demolished, while in the second phase action against 37 such agro-farms would be taken.

Moreover, out of 18 cases of non-conforming usage, the owners of 14 agro farms have demolished illegal structure themselves, while the owners of the four remaining farms have obtained stay orders from the lower judiciary, according to the record of CDA.

There are other issues with the agro-farms scheme, where the civic agency is unable to collect relevant information from the occupants.

A bench of the Supreme Court headed by Chief Justice Iftikhar Muhammad Chaudhry is scheduled to resume hearing of a suo motu notice against the misuse of agro farms in Islamabad this week. The apex court had ordered the civic agency to present a comprehensive report on the issue a couple of months back, but the refusal of farm owners to cooperate with CDA staff has left the authority in a muddle.

Sources in the civic agency told The Express Tribune that there are some major hurdles in formulating the report sought by the apex court. The court had taken a suo-motu action on media reports in May 2009, and issued a notice to the CDA chairman to carry out an inquiry into the issue.

The CDA chairman appointed a commission which designated two teams that carried out a survey in their respective areas and submitted a detailed report about the total number of farms, exact location and the covered area. There are a total of 610 agro-farms houses across the city with more than 80 per cent being used for residential and commercial purposes, violating CDA by-laws. The civic agency has earmarked 80 per cent land at these farms for cultivation.

The civic agency has taken the decision to launch an operation after some prominent individuals failed to provide records of their agro-farms, while a few of them did not even allow CDA inspection teams to enter their farms, an official of the civic body said. “After the completion of formal procedure, CDA started legal action against the violators,” said Chaudhry Ramzan, the lawyer of the CDA in the case.

The CDA had written a letter to General Musharraf this July, asking him to provide photocopies of the records of his farmhouse, providing measurements and other information about the former president’s bungalow. The letter further said that “It is therefore advised to produce all original drawings so as to assess the actual covered area at site vis-à-vis drawings and also to keep and maintain the official record of your farm house”.

Musharraf is not the only one who has been using influence to stop the authorities from a thorough assessment of their farm houses. Several key judiciary members, politicians and members of the media are alleged to have resisted the search, which is creating problems for the team in compiling the required information.

Correction: Mr SM Zafar’s name has been wrongly mentioned as one of the violators of the building rules of CDA in our news item of September 07, 2011 as he has informed this newspaper that he does not own any farmland nor he has built any structure in Islamabad. We regret the inclusion of Mr SM Zafar’s name in the said report as a violator.

Thyroid problems: For this pain in the neck, Pindi hospitals have no solution