‘Joyland achieved what no other movie was able to,’ says Alina as film fails to bag Oscar nod

Joyland, Pakistan’s official submission to the Oscars, did not make it to the nominations list for the International Feature Film category at the 95th Academy Awards. While it would’ve been a greater honour to be in the top five, one should not forget how the Saim Sadiq directorial has made Pakistan proud at every step of the way ever since it screened at Cannes.

Trans actor Alina Khan, who plays a dancer in the film, took to her Instagram to share how “grateful” she feels for all the milestones her “trailblazing” film has achieved. “Joyland made it to the top 15 films at the Oscars out of 100s of films. We didn’t get to make it to the top but I’m super grateful for this journey,” she wrote. 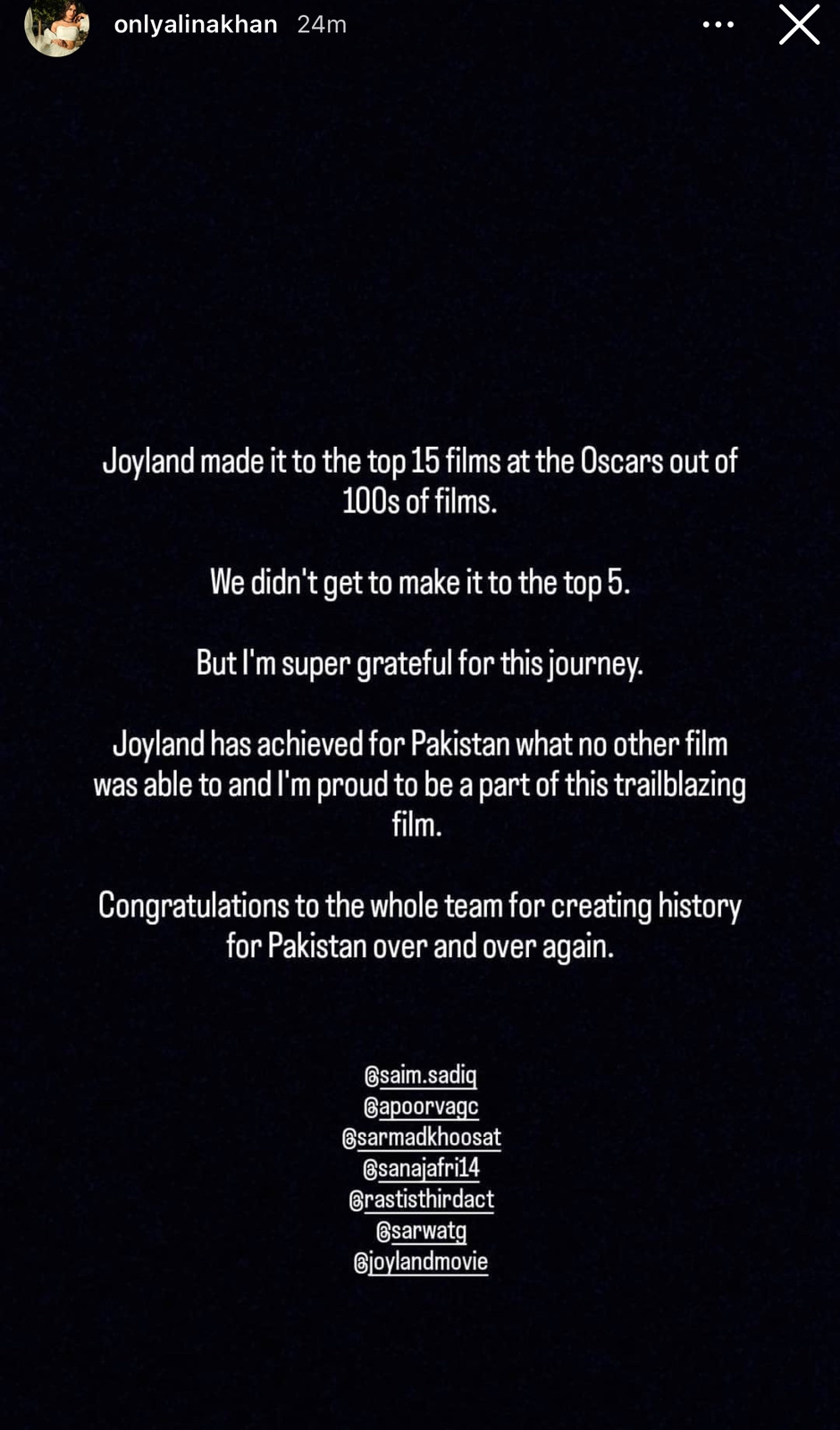 “Joyland has achieved for Pakistan what no other film was able to and I’m proud to be a part of this trailblazing film. Congratulations to the whole team for creating history for Pakistan over and over again,” she added, tagging the whole team in the Instagram Story. Producer Sana Jafri reposted the Story and wrote, “the journey was worth it. Pakistan attached hopes with the film and that’s a win on its own.”

A joyous land of achievements

Joyland became a notable cinematic picture with all the awards, accolades and standing ovations it received at multiple film festivals. The world saw it as a masterpiece and commended its brave and authentic narrative. From the second half of 2022 till now, Joyland has repeatedly made headlines locally and globally for its subtle yet evoking storyline about a patriarchal family.

After bagging the Jury Prize at Cannes Film Festival in May 2022, the film continued to make waves in the proceeding months at the Indian Film Festival of Melbourne and then the TIFF for its North American premiere. Later, the Ali Junejo and Alina Khan-starrer was also submitted to the BFI London Film Festival 2022 and the film kept on grabbing accolades even in 2023 as Junejo won big at Palm Springs Film Festival for the Best Actor category.

Last but definitely not least, Sadiq’s huge breakthrough by being shortlisted for Oscar nominations in January 2023 was the most contentious acclaim for the country. Despite all the acclaim, the film met a rough fate when it came to a home-country release. It faced scrutiny – the creator found himself in many controversies, which led to its untimely ban by the Censor Board of Film Certification (CBFC) before a nationwide release. Although the Sindh Censor Board members approved the film's premiere on November 18, the ban continued in other provinces. The film is still banned in Lahore, the city where the feature is set.

It started a lot of dialogues on what qualifies as indecent and immoral content and even though, there were polarising campaigns to ban and release Joyland, it was interesting to see the film creating a space for such conversations. It is pertinent to note that Joyland did not just make Pakistan proud with all its achievements and awards but it also broke taboos, kept up a fight for an inclusive story, won praise globally, and put the country on the map by becoming a film that stays with people for a long time.