Four of a family die of suffocation

Pakistan’s textile industry is quickly slipping into a disastrous situation as it is losing credibility and market share among international buyers.

The $19.3 billion export-focused industry is expecting a downward trend in global shipments in the current fiscal year – 2022-23. Exporters say their loyal international customers are now reluctant and asking Pakistani suppliers whether or not they will be able to meet deadlines and ship orders on time.

Many exporters are also reluctant to book new orders as Pakistan is short of dollars and basic raw material including cotton, dyes and chemicals.

Different textile lobbies have warned that they will fail to meet the $25 billion export target, instead fearing a drop to around $16 billion in FY23.

In the first six months (Jul-Dec) of the current fiscal year, Pakistan’s textile exports dropped by $1 billion to $8.5 billion against $9.54 billion in the same period last year. In FY22, textile exports had gone up by a whopping 26%.

“These dropping export figures are due to the government’s apathy and we fear this crisis will deepen further in the coming weeks,” said Babar Khan, Chairman of Pakistan Hosiery Manufacturers and Exporters Association.

“We have to import almost everything, starting from cotton to buttons and zips in order to manufacture one single product. As the government is reluctant to clear the imported cargo stuck at Karachi Port, one can imagine what the textile sector’s future will look like,” said Khan.

According to exporters, the import raw cotton worth $1 translates into an export item worth $4 after value addition.

The production of cotton crop, however, which is the key raw material for textile products, has dropped by 45% this year. The industry needs 15 million bales of cotton to translate into an annual export revenue of $20 billion.

Pakistan has only produced 4.5 million bales this year. To bridge the shortfall, the textile industry has ordered 1.7 million bales of cotton from the US, of which 0.531 million bales have already been dispatched.

Interestingly, around 100,000 bales worth $300 million have reached Karachi Port but are waiting for a go-head from the authorities.

“The textile industry is left with only 60 days of raw material and if the imported cotton is not released timely, then the industry will completely shut down by the end of March. This will result in massive unemployment as 25 million people are associated with the sector,” cautioned Hamid Zaman, Chairman North Zone of the All-Pakistan Textile Mills Association (Aptma). 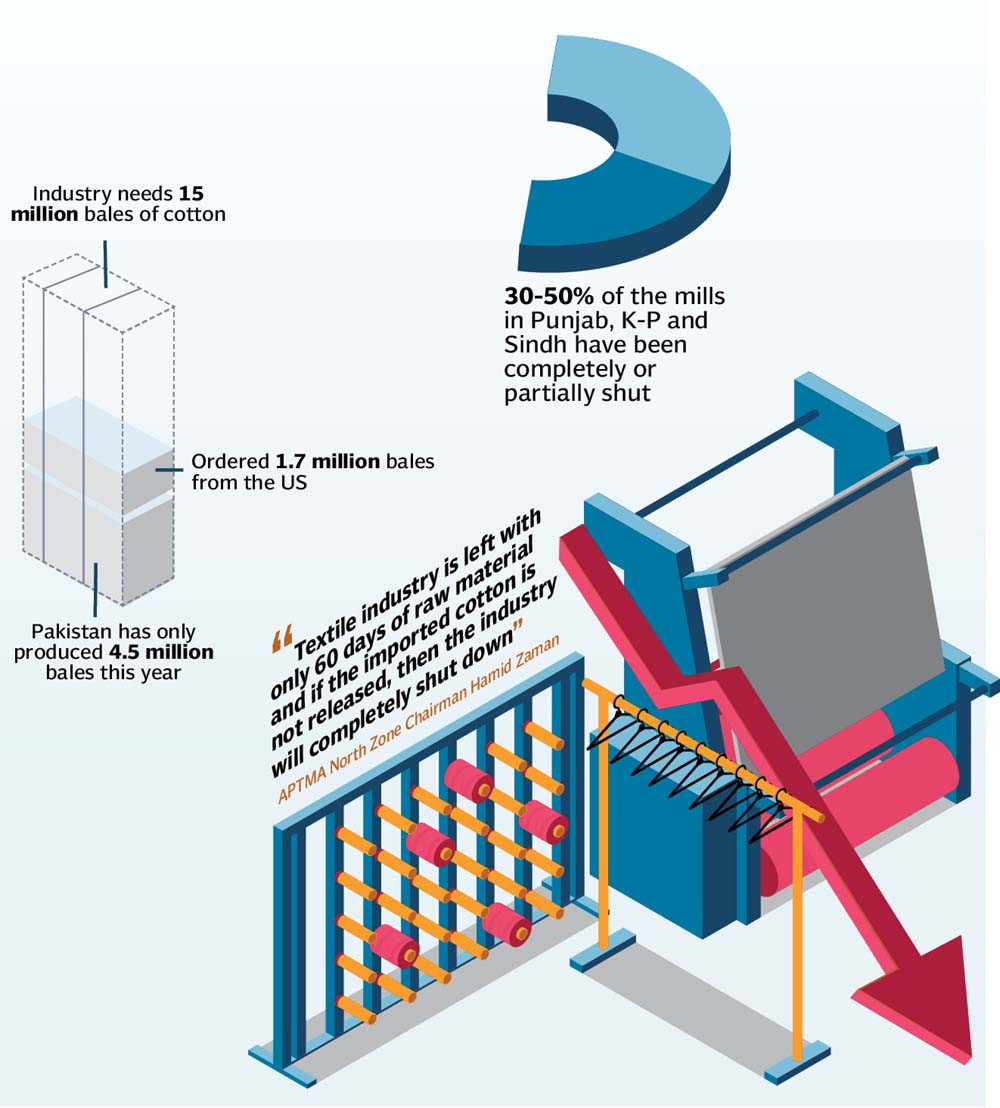 Textile industry stakeholders reveal that about 30-50% of the mills in Punjab, Khyber-Pakhtunkhwa and Sindh have been completely or partially shutdown. Faisalabad, which is dubbed the textile hub of Pakistan, is once again turning into a graveyard of power looms.

“We fear the crisis will worsen in the next two weeks, as the industry will suffer either way,” remarked Ijaz Khokhar, Patron-in-Chief of Pakistan Readymade Garments Manufacturers and Exporters Association.

“Now, all depends on the International Monetary Fund (IMF). If it does not release the next loan tranche, the dollar crisis will deepen and if it does, the government will impose new taxes and increase energy tariffs,” he elaborated.

This will lead to an increase in the cost of doing business, rendering textile millers uncompetitive in the export as well as domestic markets. “We are losing our market share to Bangladesh and Vietnam,” said Khokhar.

In this crisis, there are indications that some global shipping companies are considering boycotting Pakistan as thousands of containers are still stuck at port. “If this happens, our exports will receive a blow as we do not have any land route to connect with the world,” he added.

Pakistan does not have a proper industrial infrastructure and it lacks a complete backup supply chain, unlike India where all raw material is produced locally.

40,000 jobs in mobile industry under threat