Non-bailable warrant out for Sanaullah

Interior Minister Rana Sanaullah on Saturday landed in hot water after a court in Rawalpindi issued a non-bailable arrest warrant for him for failing to appear before the Punjab’s Anti-Corruption Establishment (ACE) in a corruption case.

Rawalpindi’s Senior Civil Judge (Criminal Division) Ghulam Akbar issued the arrest warrant for the interior minister over his alleged failure to join the investigation in the graft case.

The ACE has alleged that the interior minister purchased two plots in Bismillah Housing Scheme located in Kallar Kahar area at a price lower than the scheduled rate. It further claimed that both the plots were given to Sanaullah as a bribe.

“Record reflects that [the] contention of the IO [investigation officer] is genuine, hence, the same is accepted in the interest of justice and non-bailable warrant of arrest of the accused namely Rana Sana Ullah Khan s/o Sher Muhammad is issued accordingly,” the judge stated in the order. 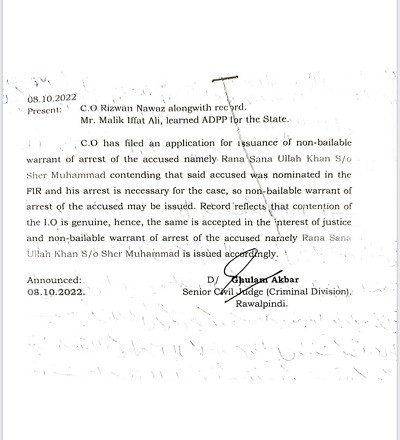 The court documents show that an FIR No 20/19 under Sections 420 (cheating and dishonestly inducing delivery of property), 467 (forgery of valuable security, will, etc.,) 468 (forgery for purpose of cheating), 471 (using as genuine a forged document), and 109 (punishment of abetment) read with Section 5(2) (criminal misconduct) of the Prevention of Corruption Act, 1947, was registered against the minister.

As per the documents, the ACE maintained before the court that the minister was nominated in the FIR and that his arrest was necessary for the case.

“So [a] non-bailable warrant of arrest of the accused may be issued,” it asked the judge.

It added that a special team was investigating the case and the nominated accused, despite being searched, could not be found.

Sources said the Kohsar SHO refused to comply with the arrest warrant as it contained the interior minister’s Faisalabad address instead of any home or office that fell within the jurisdiction of his police station.

Subsequently, the ACE team left Kohsar and headed towards the Secretariat police station but received a similar response.

With the warrant in hand, the ACE officials said they had permission from the court to arrest Sanaullah but the police were not cooperating with them.

They also complained of not being allowed to record their police stations' entry and exit in the diary.

The procedure was followed properly, they said, adding that the team would inform the court about Saturday’s development .

The ACE officials added that it would be up to the court if someone committed contempt or should some other process be followed.

The Islamabad police tweeted that if a team arrived at the Kohsar police station, the case’s documents would be taken from it.

“The Anti-Corruption Establishment team will be requested to provide records for compliance so that legal action can be taken,” it added.

Information Minister Marriyum Aurangzeb while reacting to the development said the warrant was issued because PTI chief and deposed premier Imran Khan was “scared” by Sanaullah.

“There is a conspiracy to spread chaos to divert attention from the corruption of the deceiving foreign agent [Imran], who played with national security and fooled the people,” the information minister added.

She also alleged that preparations were being made to attack the federation on ex-premier Imran’s orders.

Hours after the court issued the warrant, Punjab Chief Minister’s Adviser Brigadier (retd) Mussadiq Abbasi claimed in a news conference in Lahore that it had been proven that the interior minister had “committed a crime”, saying it was not a “political matter”.

The Punjab CM’s adviser accused Sanaullah of receiving two plots in Bismillah Housing Society as a bribe in return for construction permission from the provincial authorities.

Abbasi said the project was inaugurated in 2017 while it received approval for construction in 2018.

He added that the FIR against Sanaullah was registered in 2019 on charges of receiving bribe but neither did he cooperate with the investigators, nor appeared before the court.

The retired brigadier alleged that Sanaullah took the plots as a bribe from the illegal housing society in Chakwal district when he was Punjab’s law minister.

He further claimed that it emerged during investigation that Sanaullah along with his wife had attended the opening ceremony of Bismillah Housing Society.

The adviser further said the plots were transferred to Sanaullah by the society at a much lower price than the scheduled rate. He also accused Sanaullah of misusing his official position at that time and creating bogus and fake documents.

Abbasi said Sanaullah did not appear before the anti-corruption body on October 6 for which the non-bailable arrest warrant was issued.

He added that the ACE was taking indiscriminate action against “corrupt elements” and no one was above the law.

The interior minister and his ministry’s officials were not available for comments.

(With input from our correspondent in Lahore)