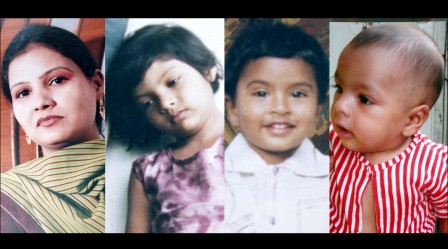 Munaza told husband on phone she could not bear her children being mistreated by in-laws. PHOTO: SHAHBA MALIK

A woman killed her four children before committing suicide on Friday, reportedly as a result of not getting along with her in-laws.

Munaza, 40, a nurse by profession and employed at the Social Security Hospital, called her husband Riaz, a police constable who also owns a cable service, in the morning when he was on duty. According to Riaz, Munaza was crying as she told him that she had injected their four children – three girls aged nine, six and four, and a three-year-old son – with poison and was about to inject herself as well.

Riaz rushed back home and took them all to the nearby Itifaq Hospital where the children were pronounced dead on arrival and Munaza as being critically unwell. She was then shifted to Lahore General Hospital where she died after seven hours.

The autopsies were conducted at Jinnah Hospital, Lahore.

Riaz said that his wife was crying on the phone, saying that she could not bear to see her children mistreated by his five brothers and their wives, with whom the couple shared the three-storey house in Gulbahar Colony.

Apparently, Munaza had for a while wanted to move to a separate house, alleging mistreatment of her children. Riaz said that he had told her a day before that he was looking for another house.

Munaza’s sister Razia said that she had tried to kill herself earlier as well, for the same reasons.

The two families also exchanged harsh words at the hospital though Munaza’s family maintained that she had a good relationship with her husband.

The two had married of their own will.

The Liaqatabad Police Station said that they would file an FIR against Munaza for suicide and the murder of her children.

Pak-Afghan territories not to be used against each other