Bayern wary ahead of Lewandowski reunion

Residents step up to protect homes in flood-hit Sindh

Citizens left fending for themselves as floodwaters engulf entire villages

Men signaling a helicopter for aid on a rooftop
KHAIRPUR NATHANSHAH:

When Mazhar Ali Chandio heard a strange noise at his cousin Mahtab’s residence late in the night, the two decided to go and check what was going on. To their surprise, they saw a boat moving in the direction of a neighbouring house.

Narrating the story to The Express Tribune, Chandio said that there were two men in the boat.

“Stop there!” Chandio shouted, “Do not move, or I will open fire,” he said as he fired a warning shot in the air.

Upon inquiry, the men told Chandio and his cousin that they were looking for their relatives. But Chandio did not buy the excuse. “They were thieves and were in search of abandoned houses,” he explained.

Despite their suspicions, Chandio and his relatives decided to let the men go with a warning rather than handing them over to the police.

“We warned them that we will shoot them if they come back again,” Chandio said. “What else can we do? There is no police,” he added, “everything is submerged under water, including the police station.”

Chandio's residence, some 100 metres away from his cousin's house was completely submerged underwater in the last week of August when the flood deluged Khairpur Nathan Shah and other villages, including Fatehpur – Chandio's village.

He immediately shifted his wife and five children to Khuda Ki Basti located in Kotri city near Hyderabad while he stayed back.

“All us men decided to guard our homes,” Chandio said, showing his licensed gun, “We are vulnerable from all fronts.”

Chandio claimed that every family had designated one to two men to stay back and guard their homes lest thieves rob them of their belongings.

"I don't how my family will survive in Kotri,” he worried, but remained hopeful that his relatives will take good care of them.

“Women will care of the children,” added Mahtab, “We [men] have decided to protect our properties”.

Pointing to the buffalo and goats standing nearby, Mahtab exclaimed: “Who will protect our houses and our livestock? We cannot move them and we cannot leave them here.”

Various villages in the surrounding areas of Khairpur Nathan Shah have been flooded after Manchhar Lake surged to alarming levels. Citizens have been left fending for themselves as government has struggled to contain the disaster caused by floodwater.

“We don't sleep in the night,” Nadir Ali, another resident of the village said.

“During the day we wait for some rescue workers and philanthropists for ration,” he added. 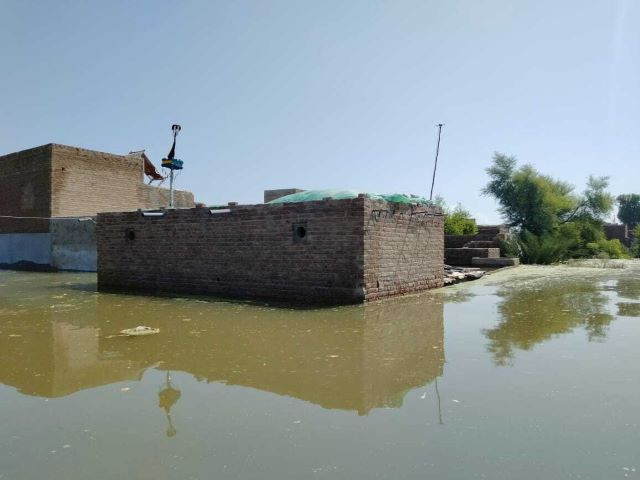 The villagers insisted that they have to remain at their homes until the water recedes and their families return back home.

“It will take at least three to four months for our lives to go back to normal,” Chandio anticipated.

Several men were seen living on rooftops in surrounding areas in a desperate attempt to prevent thieves from robbing them of what remains of their belongings.

This has also left families separated and distressed by climate-induced displacements.

Thousands of panicked citizens had left a densely-populated district in Pakistan, following a fresh spell of floods, adding to the growing number of displaced people, officials and local media had reported on Sunday.

The Dadu district of Sindh province has been surrounded by floodwaters, leaving only one passage for the residents to leave the city as the water level in Manchhar Lake, the country's largest freshwater body, is continuously rising.

Gushing floodwaters have washed away the first defence line of the city – home to over one million people – forcing the administration backed by the army troops to strengthen the remaining embankments, local media reported.

Meanwhile, the residents of Dadu had been on pins and needles for another day as three rural union councils on the outskirts of the city had come under water while two more faced imminent threat of inundation.

At least 70 villages in the three union councils, Pir Shahnawaz, Yar Muhamamd Kalhoro, and Khudabad had been flooded on Sunday. The tomb of Mian Yar Muhammad Kalhoro, who ruled Sindh from 1701 to 1719, had also been surrounded by water.

The Indus Highway was cut at Ahmed Khan Jatoi village in Yar Muhammad Kalhoro union council. After the cut, some 20 more villages were bound to come under water.