We should act faster in helping flood-hit Pakistan: Turkish minister

Farmers are still counting their losses from the devastating floods that have put a third of the country under water, but the long-term impact is already clear.

"We have gone back 50 years," said Ashraf Ali Bhanbro, a farmer in Sindh province whose 2,500 acres of cotton and sugarcane -- on the verge of being harvested -- have now been wiped out.

More than 33 million people have been affected by the floods caused by record monsoon rains, and one of the worst-hit areas is Sindh in Pakistan's south.

The province is bisected by the mighty Indus River, along whose banks farming has flourished for millennia with records of irrigation systems dating back to 4,000 BC. 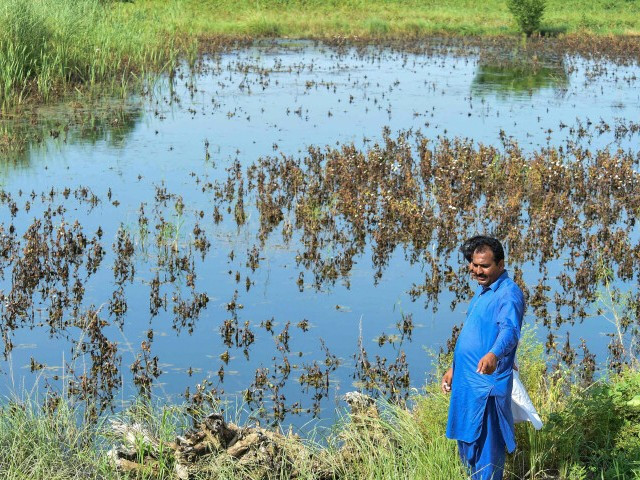 The province was drenched by record rains locally, but that water has nowhere to drain because the Indus is already at full flow, swollen by tributaries in the north, and has burst its banks in several places.

"At one stage it rained continuously for 72 hours," said Bhanbro, adding he has lost at least 270 million rupees ($1.2 million) on inputs alone.

"That was the cost incurred on fertilisers and pesticides... we don't include profit, which might have been much higher as it was a bumper crop."

Unless flooded farmlands can be drained, farmers like Bhanbro will not be able to plant a winter wheat crop -- vital for the country's food security.

"We have one month. If water is not discharged in that period, there will be no wheat," he said at his farm in Sammu Khan village, around 40 kilometres (25 miles) northeast of Sukkur.

Pakistan was for years self-sufficient in wheat production, but more recently has relied on imports to ensure silos are full as part of its strategic reserves.

Islamabad can scarcely afford imports -- even if it purchases discounted grain from Russia, as is being discussed.

The country owes billions to foreign creditors, and only last week managed to convince the International Monetary Fund to resume funding that can't even service foreign debt, let alone pay a flood-damage bill estimated at $10 billion.

Driving along an elevated highway from Sukkur to Sammu Khan provides a shocking view of the devastation wrought by the floods.

In some places there is water as far as the eye can see; where cotton crops are visible in flooded fields, their leaves have turned brown, with hardly a boll to be seen.

The big landowners will likely ride out the floods, but tens of thousands of farm labourers face terrible hardships.

Many only get paid for what they pick, and supplement their earnings by growing food on tiny plots of land in villages scattered across the province.

Those too are under water, and tens of thousands have fled their flooded homes to seek shelter on higher ground.

"There is nothing left to pick," said Saeed Baloch, who labours every season with members of his extended family, pooling their earnings.

It's not just the farmers that are affected, but every link in the supply chain is feeling the strain.

"We are doomed," said Waseem Ahmed, a cotton trader in Saleh Pat, who like many in the industry paid advances to fix purchase prices and hedge against inflation and market fluctuation.

At a small collection store in a usually vibrant cotton market in Sindh, two boys poked half-heartedly at a heap of wet cotton, checking to see if anything could be salvaged.

"The market is shut down and even the ginning factories are closed," trader Ahmed said, pointing to a row of closed shops.

The sense of helplessness is overwhelming, but cotton picker Dinno hopes for divine intervention.

"We look up to Allah. He is the ultimate saviour," he said.

We need to rise to the challenge: Mehwish Hayat vows to visit flood-hit areas herself