Talks with TTP being held under constitutional framework: Sanaullah

Despite weathermen’s forecast of dry weather, many areas receive light to moderate downpour

A view of the first spell of monsoon rain, in Karachi on June 22. SCREENGRAB
KARACHI:

Heavy rains were witnessed in several areas of Karachi on Wednesday, as opposed to the forecast of the Met Department made a few days ago.

Having predicted the dusty winds and rains for today a week ago, the weathermen had a few days ago negated the prediction.

As opposed to the forecast, dark clouds emerged on the city’s horizons, with rains and strong winds reported in several areas.

The downpour was reported in Safora, Bahadurabad, North Nazimabad, Korangi and Nursery, among other areas, while strong winds were also reported from Old City area, Garden East and West, Soldier Bazaar, Ranchor Line.

In thunder, lightning, and rain. The first of the monsoon rains hit Karachi on Wednesday, with strong, heavy winds and impending street floods.

Many localities in the metropolis plunged into the darkness due to power outages soon after it started raining.

According to the Met office, the wind power has been recorded at 81 kilometres per hour in the port city.

It added that the pre-monsoon system had remained in Balochistan for the past several days, adding Karachi's warm and humid weather strengthened the western system. 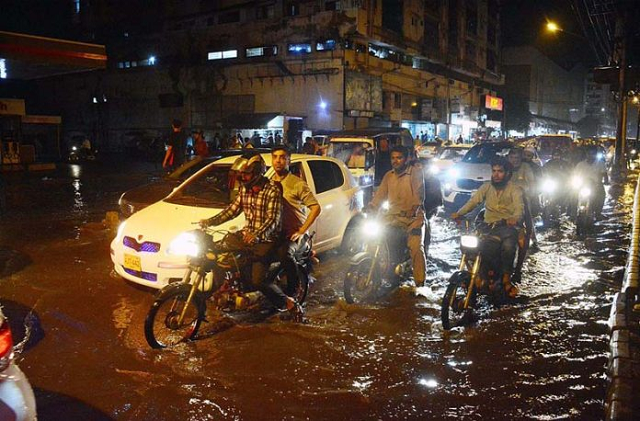 There have also been reports of heavy rains in Gulshan-e-Iqbal, New Karachi, Surjani Town, North Karachi, Bufferzone and Jail Chowrangi areas of the metropolitan.

The Met office said that the heaviest rain, 22 millimetres, was recorded at the Jinnah Terminal. Old Airport, 15, PAF base Faisal 8, Quaidabad 6, Saadi Town 3, and PAF base Masroor recorded 2 millimetres of the downpour.

The provincial director general health is ensuring the availability of doctors in hospitals all over Karachi and Hyderabad division, the health department spokesperson said.

Meanwhile, the power supplying company K-Electric has advised the dwellers of the city to be extra cautious during rains to avoid a safety hazards.

It advised the residents to be careful when using electrical appliances. The company also urged public to maintain a safe distance from broken wires, TV and internet cables, electric poles and PMTs.

It also said that power to low-lying areas of the city could be temporarily disconnected due to water inundation.

"K-Electric is monitoring the situation and the field staff is on high alert," a power utility spokesperson said, adding that residents can contact the electricity company via the call centre, on 118, or its social media platform.

The major part of the metropolis is receiving an uninterrupted power supply from 1,650 feeders.

Passing the budget in second attempt