The Cabinet Division on Sunday night issued a notification, de-notifying Imran Khan as the prime minister of Pakistan after the president dissolved the National Assembly after a summary was sent by the premier in the wake of a no-trust move against him.

In accordance with the Constitution, the president has not yet issued written instructions to Imran Khan to continue serving as the chief executive till the appointment of caretaker prime minister.

According to Article 224(4) of the Constitution, the outgoing prime minister can continue his work till the appointment of the caretaker Prime Minister.

Earlier today, National Assembly Deputy Speaker Qasim Suri dismissed the no-confidence motion submitted by the joint opposition to dislodge the prime minister as he termed it "unconstitutional" under Article 5.

The ruling read by Suri prompted strong protests from the opposition benches who surrounded the desk of the speaker to record their protest.

Suri said the resolution could not be voted upon as it was allegedly supported by a foreign power and violated Article 5. Suri, who chaired the session in the absence of Asad Qaiser, also adjourned the session indefinitely. 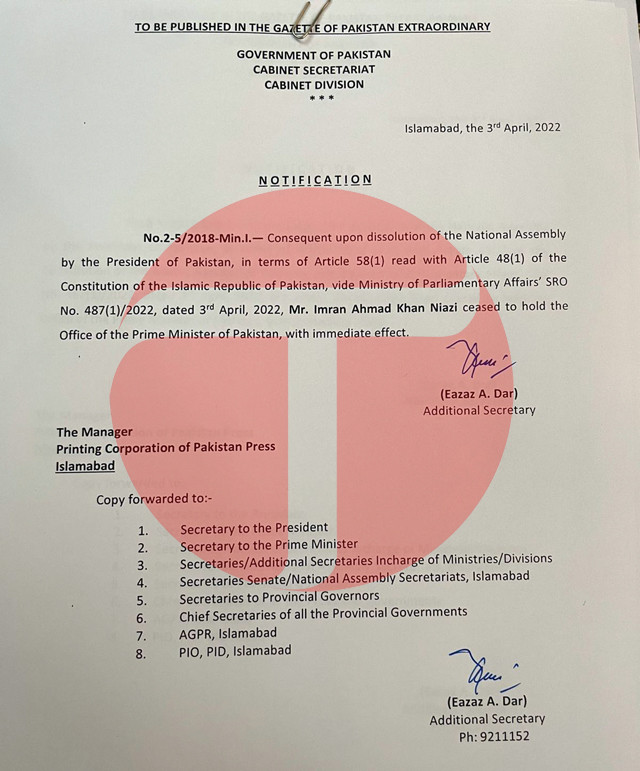 Imran Khan to remain PM for next 15 days: Rashid

Imran Khan guilty of 'high treason', should be tried under Article 6: Nawaz

Imran will be dealt with according to Article 6, Bilawal says