How COVID-19 became a 'boon' for a battered Indian hospital

Vir Das under fire for 'insulting India' in the US

Prime Minister Imran Khan said that the government wanted to bring laws that would end the controversy surrounding elections since the 1970s. PHOTO: RADIO PAKISTAN
ISLAMABAD:

The government and its allies on Wednesday pulled off a victory against the opposition during a joint sitting of parliament by succeeding in passing the bills that pave the way for holding the next general elections in the country through the use of electronic voting machines (EVMs) and giving around nine million overseas Pakistanis the right to cast their votes in the 2023 polls.

Surprisingly, the legislation pertaining to the electoral reforms -- The Election (Amendment) Bill, 2021 -- was deferred and only the bills related to using the EVMs and enabling overseas Pakistanis to cast votes were passed.

In total, 33 bills were passed in the joint sitting.

Apart from the main agenda, five bills were passed through the supplementary one.

Given the political volatility, the passing of over two dozen bills through a majority vote shows the vote of confidence in Prime Minister Imran Khan by the treasury benches when the lawmakers from the National Assembly and Senate sat together for the joint sitting.

The government and its allies with a total of 221 votes against the opposition parties’ 203 votes did not receive a free hand for roughly three hours.

However, as soon as the opposition parties walked out from the session to record their protest against the bulldozing of the legislative business, it literally gave a walk over to the treasury benches, which accelerated the pace of passing the bills.

In the over two dozen bills, the government passed the bill giving the right of review and re-consideration to the Indian spy Kulbhushan Jadhav in order to give an effect to the judgment of the International Court of Justice (ICJ).

According to the bill, the Indian government had initiated proceedings against Pakistan before the ICJ, alleging that it had violated the Vienna Convention on Consular Relations regarding the detention and trial of Jadhav.

A Pakistani military court had given its judgment in July 2019 and awarded death sentence to Jadhav. Subsequently, the ICJ in its judgement in July 2019 had observed that Pakistan was under an obligation to provide effective review and reconsideration of the conviction and sentence of the Indian spy.

The bill states that it was necessary to provide mechanism for review and reconsideration of its own choice under the ICJ judgement.

For roughly three hours -- between 1pm to 4pm -- amid fervent protest by the opposition, the government found it difficult to proceed.

However, as soon as the opposition parties walked out from the session, it became easier for the treasury benches to pass the bills one after the other.

In their speeches, Leader of the Opposition in the National Assembly Shehbaz Sharif, PPP Chairman Bilawal Bhutto Zardari and a few others highlighted that the government needed 222 votes -- which is the majority of the total membership of both the houses to pass a bill in the joint sitting.

However, the treasury benches said that they only needed a simple majority of the members present in the house under Article 72 (4) of the Constitution.

NA Speaker Asad Qaiser, who was constantly being criticised for being partial by the opposition benches, gave the ruling that the Constitution prevailed over any other rules.

During the session when the votes were counted, it emerged that the opposition parties’ seven members were absent from the joint sitting. They included four members of the PPP – MNAs Naveed Qamar, Abdul Karim Jogi, Yousuf Talpur and Senator Sikandar Mandhro – two members of BNP-M including Akhtar Mengal and Senator Dr Shahnaz Baloch and one member of the JUI-F, Malik Afreen.

The opposition said the PPP lawmakers were unwell while Mengal was abroad. Despite requests, MNA Ali Wazir’s production orders were not issued and he remained incarcerated. Former finance minister, Ishaq Dar, was also absent because of the suspension of his election results.

A manufactured majority in parliament starts crippling the system.But not just the system. So much arm-twisting going on in the capital right now by the shaky “Govt” that Islamabad’s orthopaedic surgeons should be on alert.Opposition is United & picking up steam.#Bulldozersession 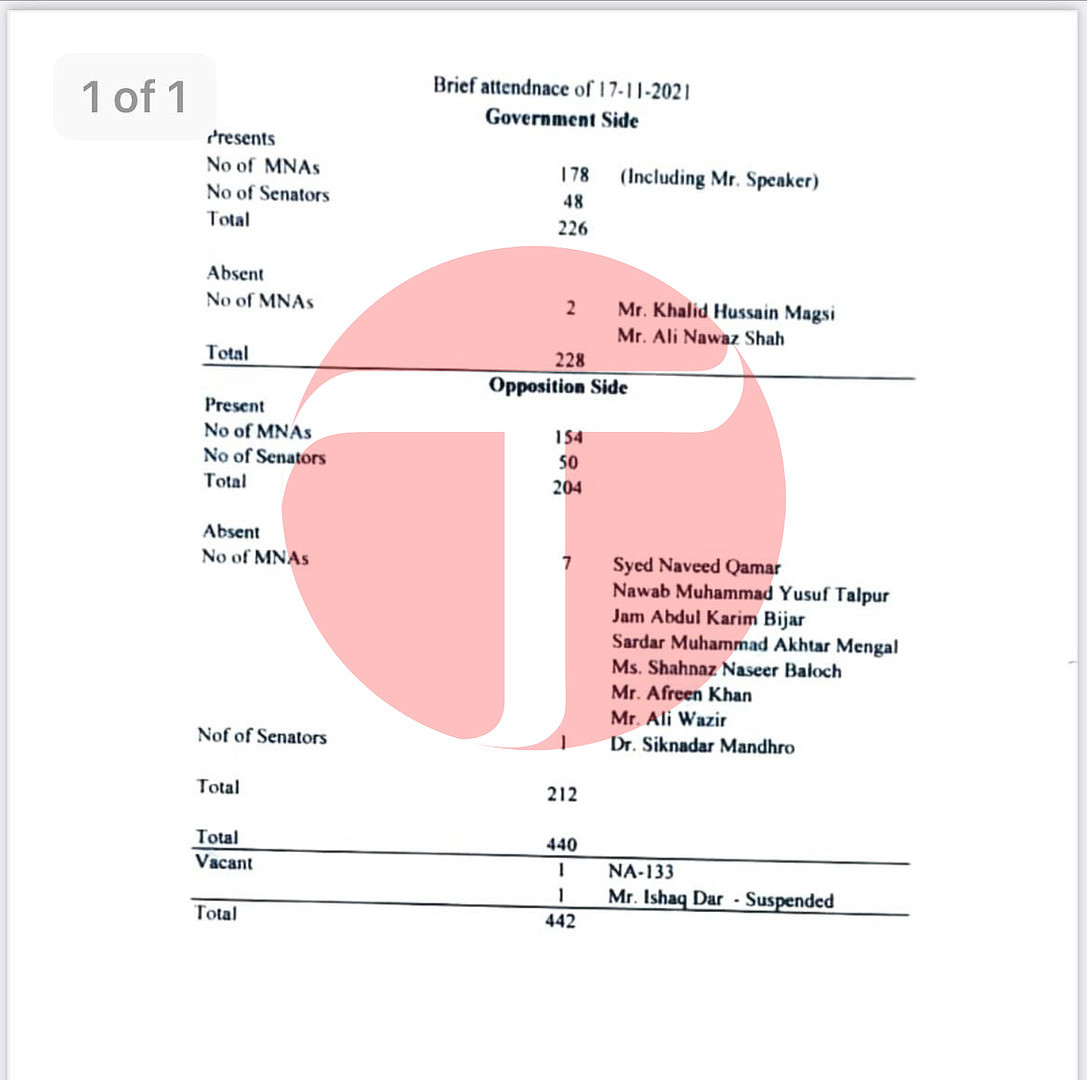