In the past 10 years, only three authentic records of their occurrence in Pakistan have been recorded

An extremely rare and critically endangered species of sawfish, Longcomp Sawfish, was caught by fishermen near the Pakistan-Iran border on Saturday, October 29 2021.

This species, scientifically known as Pristis Zijsron, is considered to be extremely rare and faces the threat of extinction.

However, due to overfishing and habitat degradation, the population of sawfish has decreased substantially and they are now considered to be nearly extinct at the local level.

In the past 10 years, only three authentic records of their occurrence in Pakistan have been recorded. The last authentic record of occurrence for this species was reported on May 30, 2013, when a large Longcomb Sawfish (rostrum 113 cm) was caught by fishermen at Khajar Creek.

There used to be a large fishery of sawfish in Pakistan before 1970, however, their population collapsed by the 1980s, because of high mortality due to fishing gears.

Sawfish have a long life, slow growth, late maturity, and low fecundity; making them extremely vulnerable to any changes that may reduce their population.

Sawfish rostrums (saws) can easily become entangled in nets and other fishing gear, making them vulnerable targets for overfishing. 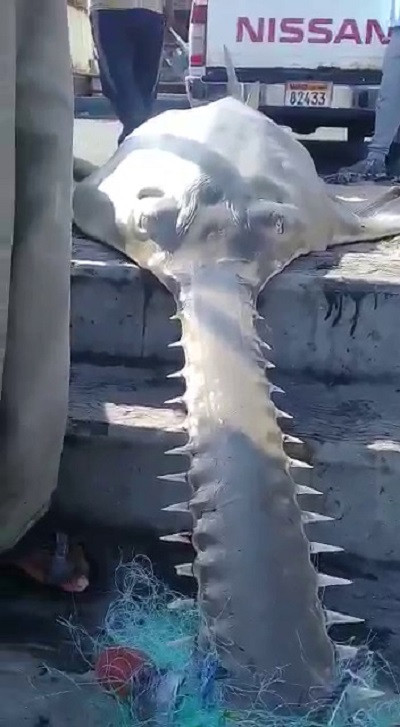 They are characterised by a long, narrow, flattened rostrum, or nose extension, lined with sharp transverse teeth resembling a saw, giving its name, sawfish.

Further, in June 2013, a large specimen of sawfish was caught at Khajr Creek near the mouth of the River Indus. Another Largetooth Sawfish was landed at Karachi Fish harbour on May 11, 2015.

On January 18, 2016, another Pristis pristis was entangled in a fishing net at Surbandar, Balochistan, and is the fourth authentic recent record of this species occurring in Pakistan.

Hearing about the incident, Ghulam Nabi, a senior fisherman from Jiwani and a team from WWF-Pakistan, were dispatched to the location and collected the necessary information about the sawfish.

According to the fishermen, the fish was caught in a bottomset gillnet deployed for catching demersal fishes on the maritime border between Pakistan and Iran.

According to them, the sawfish was an extremely rare occurrence and it was caught after about 30 years in the area.

At one time, sawfish dominated among shark species but due to the introduction of motorized fishing vessels and nylon nets, their population started to dwindle.

The sawfish were so abundant that in some coastal villages, fishermen used to use the saws (rostra) as the boundary posts of their houses.

Because of the decline in sawfish populations worldwide, the International Union for Conservation of Nature (IUCN) listed all sawfish species as ‘Critically Endangered’.

Sawfish are also included in Appendix 1 of the Convention on International Trade in Endangered Species (CITES) which prohibits any commercial trade in those species.

Both the Sindh and Balochistan governments had enacted laws banning the catching, marking and sale of sawfish in the respective provinces.