Ryan Gosling agrees to be the Ken to Margot Robbie's 'Barbie'

To mark International Snow Leopard Day on Saturday, the World Wildlife Fund Pakistan (WWF) released footage of two snow leopard cubs found thriving in Dhee Nala, in the buffer zone of Khunjerab National Park, where community members have reported an increase in the number of snow leopards in the Karakoram range.

The remarkable footage, captured by local wildlife photographer Imtiaz Ahmad, highlights how the snow leopard is important in keeping the local ecosystem in balance, with their presence indicating the good health of their high-altitude habitat.

Studies estimate the snow leopard habitat in Pakistan to be around 80,000 square kilometres, which forms 4.5% of the global snow leopard range. Only 11% of this habitat range has been researched as the rough terrain and harsh climatic conditions make research considerably difficult.

A recent WWF report suggests that between 221-450 snow leopards are killed every year globally, with around 55% of them in retaliation to the leopard preying on people’s livestock.

Despite this, it is encouraging to see local wildlife photographers capturing unique footage which is helpful in providing critical knowledge about the snow leopard range and habitat and participating in efforts to create awareness about the importance of these big cats.

The photographer has been following these cubs since birth and continues to do so now that they are six months old. 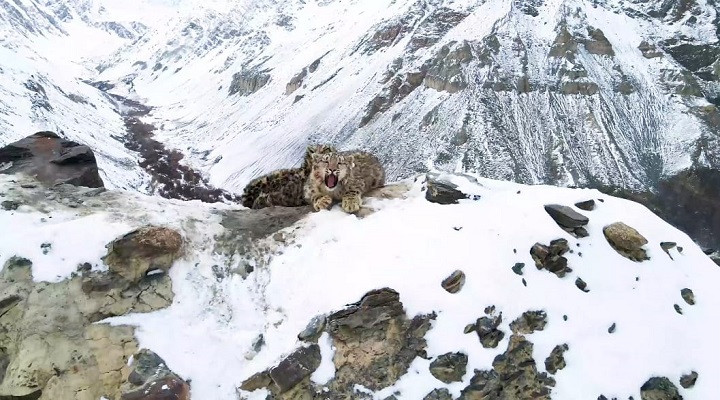 “I have captured this unique footage of snow leopard cubs and have also been developing videos so that my community can learn more about this species, understand how they are linked to our lives, change perceptions around them and save them from extinction. When I follow these cubs through my lens, I am hopeful about their future,” the photographer said.

For over five decades, WWF-Pakistan has been working to restore and conserve endangered wildlife species in the country by supporting the management of national parks, reducing conflict between snow leopards and communities, boosting rural development, and mitigating illegal wildlife trade.

Sharing his comments on the video, Rab Nawaz, Senior Director Programmes WWF-Pakistan said, “It is vital that we recognise the importance of the habitat that supports this species, not only for the sustainability of local livelihoods but also the millions of people who live on the plains of which the glaciers provide tonnes of fertile sediment vital for agriculture”.

“Due to habitat degradation and unsustainable infrastructure developments, the survival of many threatened species, including the snow leopard, hangs in the balance. Climate change is making it harder to undertake conservation efforts with communities experiencing extreme poverty caused by climate-related shocks,” Nawaz stated.

The footage can be viewed on WWF- Pakistan’s social media channels.