Hundreds of Kashmiris as well as Pakistani and global human rights activists attended the protest outside the Indian Consulate in Birmingham. PHOTO: EXPRESS
BIRMINGHAM:

Tehreek-e-Kashmir (TeK) UK on Sunday held an anti-India and pro-Kashmir freedom protest outside the Indian Consulate in Birmingham.

Hundreds of Kashmiris as well as Pakistani and global human rights activists attended the protest who had gathered to express solidarity with the people of Kashmir.

They raised slogans including "stop killings in IIOJK", "we want freedom", "Indian forces go back" and "free Kashmir". The protesters condemned the rising arrests and killings of civilians in Indian Illegally Occupied Jammu and Kashmir (IIOJK).

On the occasion, president TeK UK Raja Fahim Kayani said that the extrajudicial killings of five civilians in fake encounters was the worst kind of human rights violation in IIOJK.

"Indian occupational forces detained more than 1,500 Kashmiris in two days during the first week of October and levelled false charges against them," he added.

He said that the recent crackdown in IIOJK was the biggest ever in decades, adding the Indian government used the same black law to arrest youth. 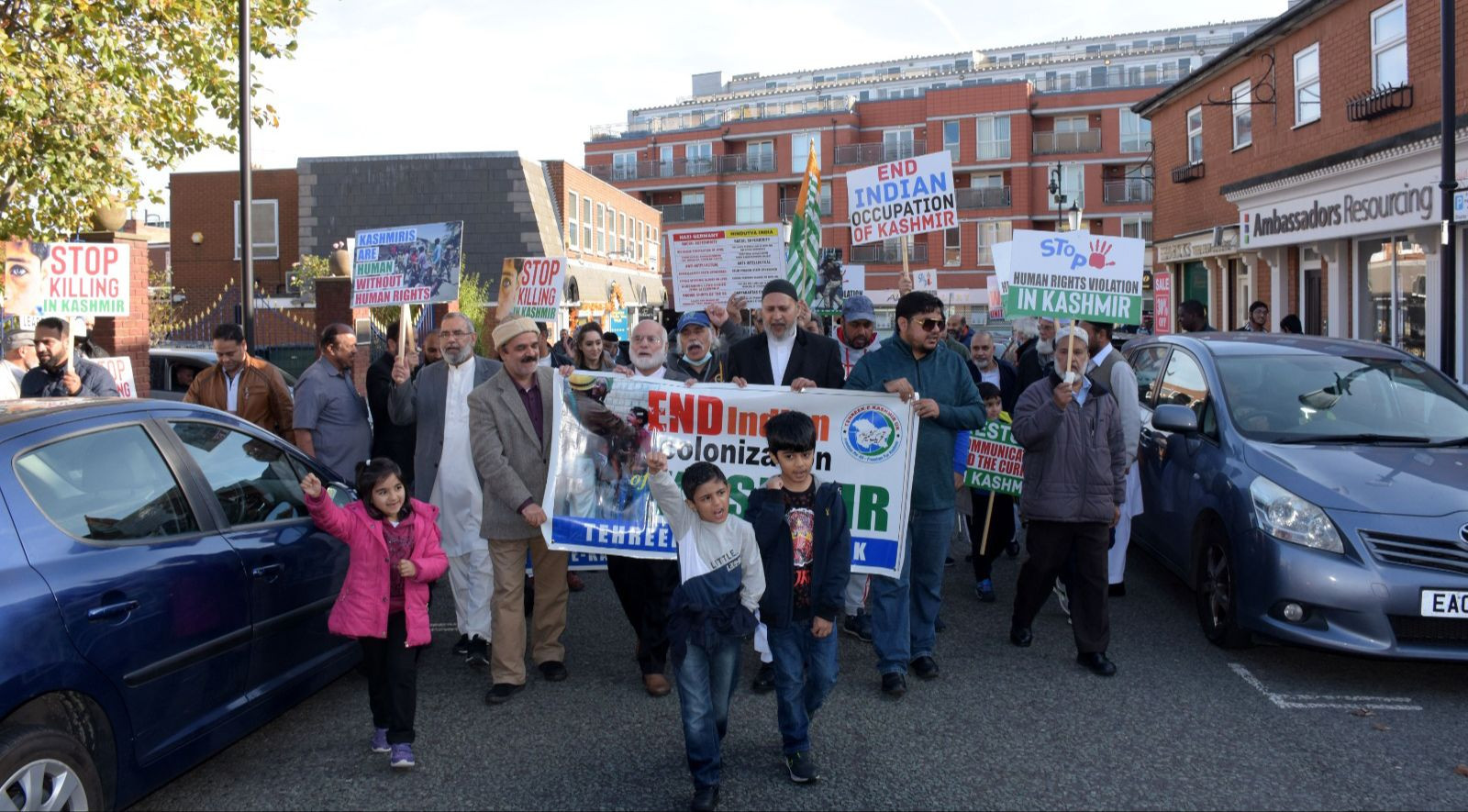 "PSA was also declared as a black law by Amnesty International in 2010 and under this law, anyone can be sent to jail for two years without any trial," Kayani added.

He further said that Kashmiris across the globe and in the UK will continue to raise the voice to condemn the continued state terrorism in IIOJK. 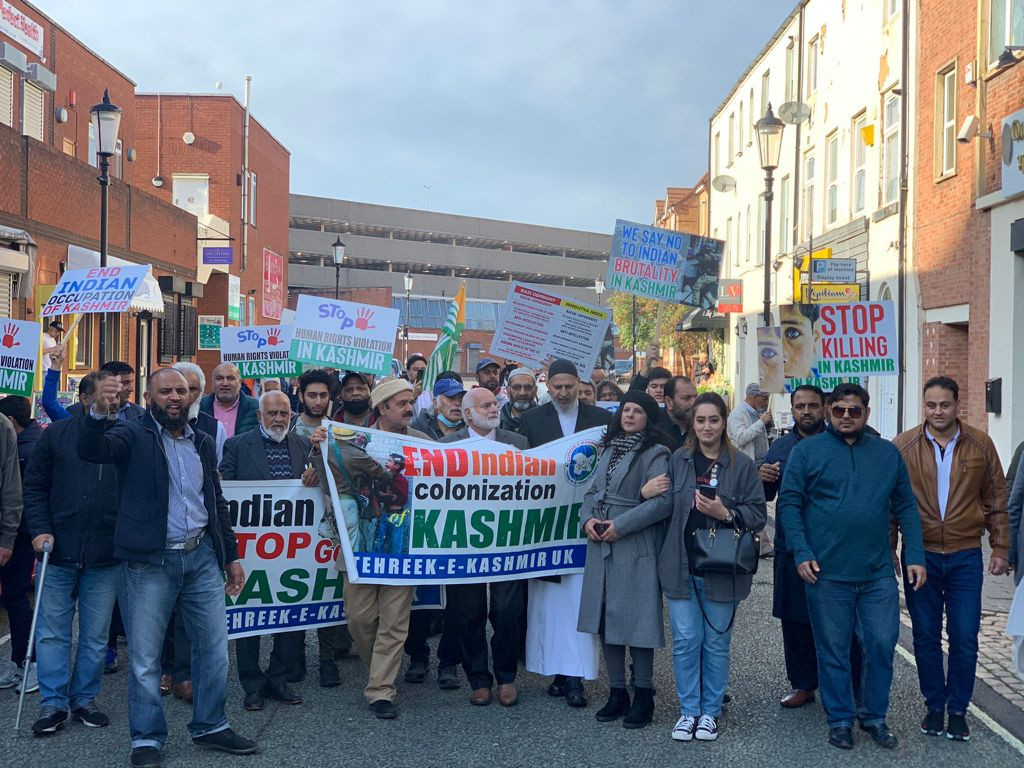 "Life has been made miserable for the Kashmiris in IIOJK. There are more women victims than men as most Kashmiri mothers lost their sons, brothers and husbands in fake encounters of Indian troops," he added.

Kayani said that disappearances of Kashmiri youth at the hands of Indian troops left thousands of widows and half widows in IIOJK. "The Indian troops are enjoying impunity since Armed Forces Special Powers Act (AFSPA) also known as "license to kill and molest women" was implemented in the 1990s to suppress Kashmiris political struggle.

Kayani urged the world to unite against India and focus on the atrocities being committed by Indian troops in IIOJK since 1989. 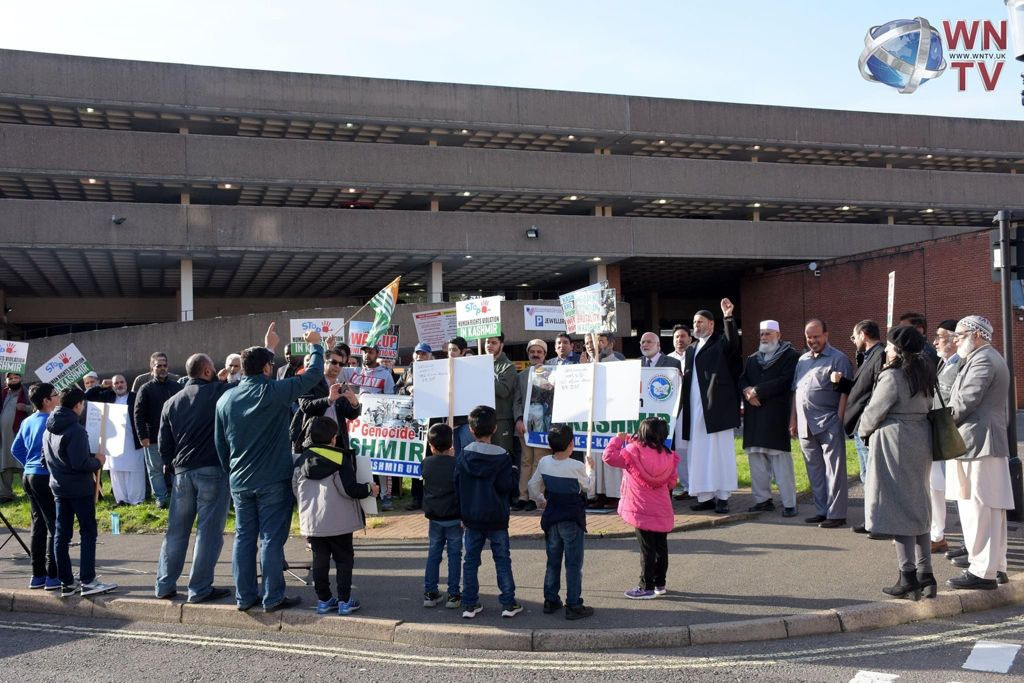 "At the moment minorities especially pundits are being killed by Indian troops to give plebiscite struggle a bad name aimed to defame Kashmiris political struggle at global level."

President TeK Europe Muhammad Galib said it is time to remind the United Nations that if it continues to keep silent on the issue, India will become more dangerous for minorities and oppressed people of Kashmir.

"Kashmiris need to educate the world how to deal with India by exposing it to save humanity," Ghalib added.

He said that overseas Kashmiris across the globe, Europe and in the UK will continue to raise voice against Indian state terrorism in IIOJK.

Small volunteer groups in Kashmir act as beacons of hope

Pakistan urges UNHRC to ‘stand up’ for Kashmiris