Rare project scheduled to be completed in 2026, says Shahid Rassam

The rare artwork, measuring 8.5 feet long and 6.5 feet wide, is poised to break the record currently held by a copy of Quran sized at 6.5 and 4.5 feet which was prepared in Afghanistan in 2017. PHOTO: AA
KARACHI:

In a sprawling but cosy wing of the Karachi Arts Council, Shahid Rassam was meticulously supervising a group of artists engaged in placing Quranic script crafted out of aluminium and plated in gold on a huge canvas.

Rassam, a renowned Pakistani artist, and his over 200 associates have been working since 2017 to prepare what he says is the world’s largest copy of the Holy Quran.

The rare project is scheduled to be completed in 2026.

The rare artwork, measuring 8.5 feet long and 6.5 feet wide, is poised to break the record currently held by a copy of Quran sized at 6.5 and 4.5 feet which was prepared in Afghanistan in 2017 and is now kept at the Kul Sharif Mosque in the Russian city of Kazan.

According to Rassam, it marks the first time in the over 1,400-year history of Islam that the Quran is being cast in aluminium. Calligraphers have previously produced classic art in creating copies of the holy book using conventional materials like wood, paper, animal skin and cloth.

“This is my lifetime project,“ Rassam told Anadolu Agency as his associates continued concentrating on their work.

Over the past several months, Rassam, 49, who took two years to prepare the first two pages of the Holy Quran, has been spending an average of 10 hours a day on the project.

"It’s more than a challenging task, and equally sensitive [in terms of the sanctity of the Quran]. One minor mistake can ruin the whole effort," he noted.

Rassam will display the first sample of his artwork, Surah Rahman at the ongoing Dubai expo 2020 in November.

The Karachi-based artist said his work is inspired by Turkish, Arabic and Iranian art designs.

“We have created our own design [to cast the Quran] after studying Turkish, Arabic and Iranian designs. It’s not a mixture of these designs, but it is inspiration,” he said. 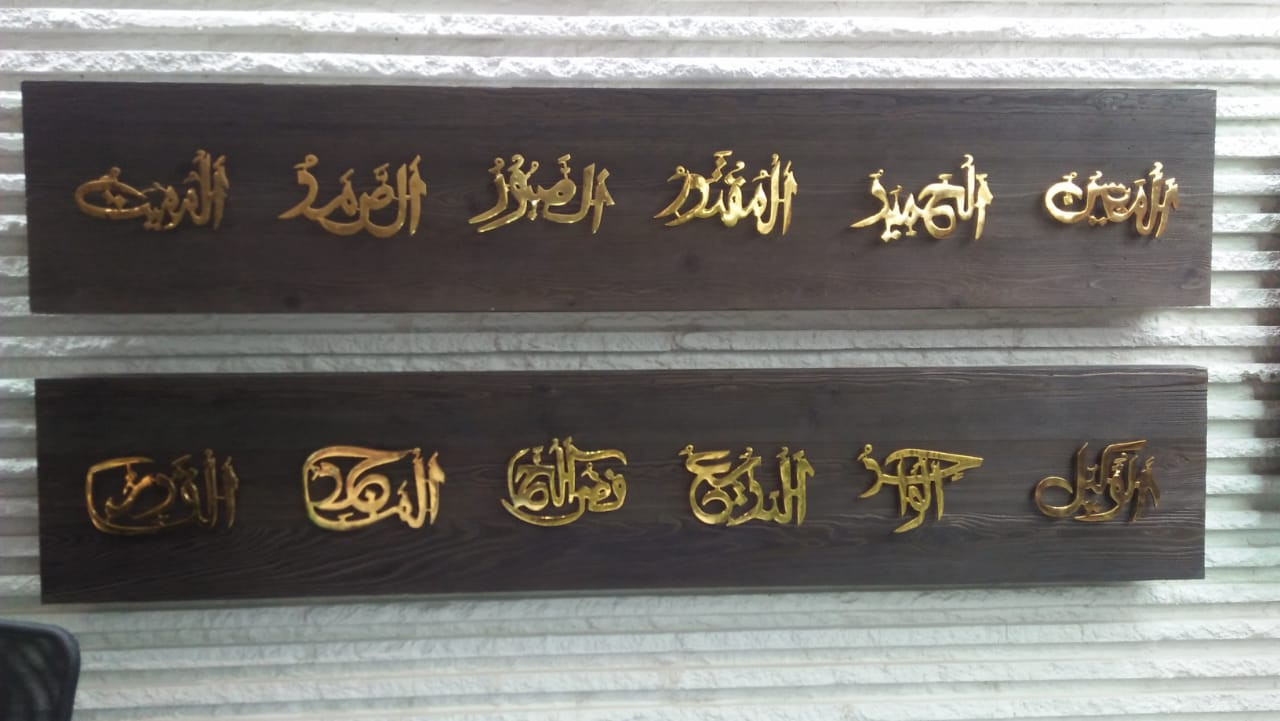 In the first step, he said, the letters are cast in clay, which is later plastered and finally converted into fibre before being cast in aluminium.

Over 200 kilograms of gold, 2,000 KG of aluminium and 600 canvas rolls will be used to cast 77,430 words on 550 pages. To illuminate and enrich the design, precious stones like rubies, sapphires and emeralds will also be used, he said.

Italian glazing technique and acrylic colours have been used to develop the design, as it can last for hundreds of years, he maintained.

Not all about religion

Rassam said he had prepared a sample of the artwork at the request of a friend in 2016, which propelled him to make it on a wide scale.

“I kicked off this project solely on my own. I am still disbursing my own resources on it. There has been no [financial] support by the government or any institution,” he said when asked how he would bear such huge expenses.

“Some foreign governments, however, have approached me in this regard,” he said, without mentioning the countries’ names.

These types of rare and huge projects, he observed, always require support from the state.

Rassam said his work is not all about religion but about art and culture as well.

“This [work] is not meant for Muslims only but to attract people from different religions through art. It is aimed at highlighting Islamic art and culture,” he said.

He said a separate museum would be required to display this huge artwork.

Proud to be part of rare artwork

Jawad Ahmad Jan, one of Rassam’s associates, said he is proud of being associated with such rare artwork.

“You get this opportunity once in a lifetime, and I am proud to be part of this project,“ he said.

“Just imagine, at the very outset of your career, you get such a gigantic opportunity.”

Sharing a similar view, Mahnoor Khan, another young assistant, who has been part of this project for the past two years, said: “I feel lucky to be part of this history-making project. It’s a lifetime thing for me.”

‘Early Muslim historians saw Quran as a source of history’