The Afghan interim cabinet on Friday approved the name of Maulvi Abdul Hakim Haqqani for the slot of the chief justice of Afghanistan while appointing Maulvi Muhammad Qasim Turkman and Maulvi Abdul Malik as his aides.

The names were announced through a notification by the government, after approval from the Rehbari-e-Shura (council of guidance) and by the Taliban's supreme leader, Mullah Haibatullah.

Haqqani was a close aide and confidante of the deceased founder of the movement, Mullah Muhammad Umar. He was also a consultant to Mullah Omar on various affairs and currently serves the Rehbari Shura as its member.

When the news of the death of Mullah Akhtar Mansoor broke, who was killed in a US drone strike in Balochistan, he was consulted by the local shura (consultative body) regarding making the news public, he opted to reveal it as he stated that the US knew the identity of the deceased. The Taliban did as he directed them to do so.

He was also part and parcel of naming Mullah Haibatullah as the chief of the movement and the same was followed by the group.

Haqqani also served as the head of negotiations in Afghanistan during the tenure of former president Ashraf Ghani, post withdrawal US-Taliban talks in Doha and as the acting chief of Taliban affairs in the shadow government of the Taliban.

He is well versed in fiqh, the Holy Qur'an and the Islamic justice system and has had scores of books published on various subjects and translated into multiple languages. His recent work was also translated into Bengali.

Haqqani's aide Maulvi Qasim Turkman hails from the Turkan tribe and is respected amongst his tribe as a well-known member of the Rehbari Shura. He has also served on various positions within the movement, including being a part of the self-accountability process in the previous shadow government.

Turkman has also served as a member of the Qatar office and was part of talks with the US, China and Russia.

The second aide, Abdul Malik, hails from Kandahar province and is in his late 40s. He was not known as a prominent member amongst the Taliban ranks earlier but was elevated to chief of the eastern region when the Taliban divided the country into three administrative units. Malik is well-versed in the Holy Qur'an, fiqh and Islamic justice.

In another decree issued earlier today, the group directed senior officials to not give punishments over crimes in public places. 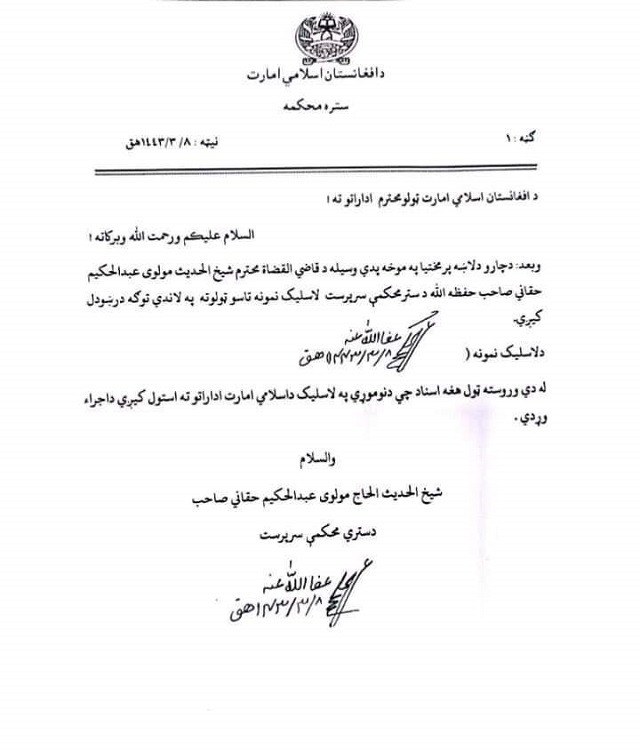 Policy pointers — Pakistan and the Islamic Emirate of Afghanistan