Not in favour of interference in Afghanistan, says Maryam

Taking the cover of back-to-back low-level terrorist activities in Indian Illegally Occupied Jammu and Kashmir (IIOJK), Modi's cabinet ministers are back to the business of hurling threats at Pakistan, warning it of more “surgical strikes”.

Union Home Minister Amit Shah on Thursday, in an address in Goa state, mentioned the incident at Poonch, saying there was a time talks happened but now is the time to reciprocate.

He apparently cautioned Islamabad in his address and said that more such strikes would be invited by Pakistan should it choose to "transgress".

#WATCH | "Another important step was surgical strike under PM Modi & former Defence Minister Manohar Parrikar. We sent out a message that one should not disrupt India's borders...There was a time when talks happened, but now is the time to reciprocate," says Home Min Amit Shah pic.twitter.com/BrMFUfzLRT

India, in the past, undertook several false flag operations, like the Pulwama attack and blamed Pakistan, even leading to a botched attack on Balakot.

The recent spate of several low-level terrorist activities in IIOJK, being closely monitored by security analysts, are seen as a precursor for major state-sponsored terrorist activity. The Indian stance has again caused a stir in the international circles, Pakistan and besieged the IIOJK population.

Known for his staunchly anti-Pakistan bias, Amit Shah said that under Prime Minister Narendra Modi and former defence minister Manohar Parrikar, a surgical strike was conducted. He termed it an "important step" and said: “We sent out a message that one should not disrupt India’s borders.”

India claimed to have conducted a surgical strike in Pakistan across the Line of Control (LoC) on September 29, 2016, in response to similar false flag terrorist attacks in Uri, Pathankot and Gurdaspur.

The incidents precede situations and are aligned whenever there is some major activity in India like the state elections – in UP, domestic agitations against the government – the farmers' protests, mega defence, and other corruption scandals, diversion from gross human rights violations in IIOJK and mainland India.

On October 9, the Human Rights Watch called for the alleged perpetrators as well as Indian security forces accused of abuses including harassment, torture and extrajudicial killings to be held accountable for their actions. 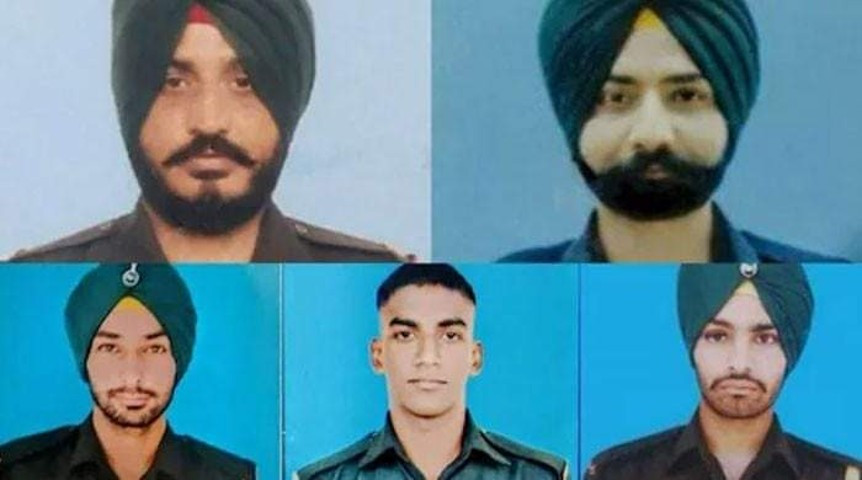 The recent killing of five Indian soldiers in IIOJK, four of whom were Sikhs including one Naib Subedar in the Rajouri sector, was being seen as an attempt to divert Sikhs farmers attention from the recent killing of Sikhs in Lakhimpur towards anti-Pakistan sentiments.

Strictly pursuing its agenda, the Indian media claimed arrest of, what they called, “Pakistani terrorist” by their agencies in Delhi on 11 October, and claimed he has been trained by Pakistan.

Hussain Nadim, the head of the IPRI, in a tweet commenting on the alleged arrest of Mohammad Ashraf said for the past few weeks Indian deep state was trying extra hard to build a narrative around the threat from “Pakistan-based” terrorism.

“False flag ops & propaganda are classic fascist tactics to repel domestic instability by escalating crisis on the borders,” he said in a tweet.

For past few weeks Indian deep state is trying extra hard to build a narrative around the threat from “Pakistan based” terrorism.

The core Indian objective of creating a false alarm mainly aims at diverting the attention of the international organisations and the Muslim countries towards the grave nature of human rights violations against the minorities; particularly the Muslims in India and IIOJK.

An Indian social media handle @Panther7112 quoted “intel input” to suggest that Pakistan was planning a False Flag operation on the Line of Control. “Forces Are Prepared To Meet Any Challenges.” Interestingly the same text was used by similar sponsored handles.

Intel Input Suggests That Pakistan Is Planning False Flag Op On LoC. Forces Are Prepared To Meet Any Challenges.

Security analysts believe that the setting of the scene by India was a clear indication of the direction the situation might take in the days ahead.

Horrific videos of lynching of Muslim youth across India has sparked strong reaction amongst the social media users, however, the West remains unmoved as its economic and strategic interests outweigh the human rights abuses. On the other hand, India continues to play its part as a peace spoiler putting at risk the entire region.