Indians furious over release of bruised soldiers' pictures by China

Standoff between India and China has been continuing since early 2020

Indians are furious over the release of images of captured and badly bruised Indian army officers and men during the China-India clashes in Galwan valley in the Himalayan border area in 2020.

The images widely shared on social media showed scores of Indian soldiers beaten "black and blue" and marching in long columns, while the Chinese troops are standing on the hillside.

The new pictures initially emerged on Chinese social media and showed how the Indians got the surprise of their life when they got pushed back during the 2020 clashes between China and India in Galwan. Images showed injured Indian soldiers being captured by the Chinese army (PLA).

News reports said the soldiers belonged to the 16 Bihar Regt of the Indian Army who left behind their Commanding Officer at the mercy of Chinese PLA and ran away.

The standoff between India and China has been continuing since early 2020. The China Daily in its publication on October 9 quoted sources from the Chinese military and said that on September 28, the Chinese border guards were carrying out routine patrols in the Dongzhang area on the Chinese side of the China-India border, but were “unreasonably blocked” by the Indian side. 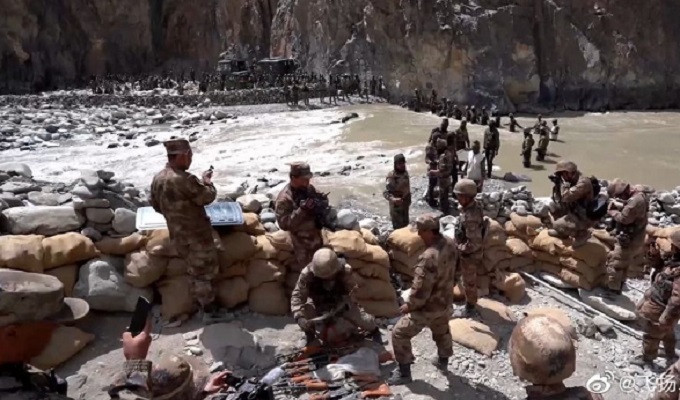 Chinese officers and soldiers “resolutely countered, and returned after completing the patrol mission”.

Read Assam Muslims fear for their future under Indian regime

The paper quoted the Chinese source and said that the Dongzhang area was China’s inherent territory, and it was entirely reasonable and legal for the Chinese border guards to patrol their own territory.

It rejected the Indian media’s hype about Chinese soldiers being detained for “crossing the line” and termed it false and inconsistent with the facts. The paper pointed that the responsibility rested entirely with the Indian side.

According to the Economic Times, over 100 PLA soldiers crossed the border at Barahoti in Uttarakhand last month, damaged some infrastructure, including a bridge, before retreating. The ET quoting officials aware of the situation, said the movement of the Chinese PLA, as disengagement of troops in eastern Ladakh has been progressing well, has sounded the alarm bells in the central sector.

The incident on August 30 did not result in a face-off as PLA soldiers returned before they could be confronted. Over 100 soldiers and 55 horses transgressed over 5 km of Indian territory by crossing the Tun Jun La Pass, security establishment insiders told ET.

The sad state of affairs of the Indian army, low morale and unwillingness to defend their territory could be judged from the fact that even government officials in New Delhi confirmed that the Chinese soldiers along with military horses had come to the grazing ground near Barahoti, crossing the Tun Jun La Pass.

On the contrary, the Indian army chief continues to cast an impression that his strong military force could take on the Chinese People’s Liberation Army (PLA). Indian Chief of Army Staff General M M Naravane said the military build-up by China in the eastern Ladakh region and new infrastructure development to sustain the large-scale deployment were matters of concern and India has been keeping a close watch on all the activities.

He said if the Chinese military maintains the deployment through the second winter, it may lead to an LoC-like situation (Line of Control) though not an active LoC which is present on the western front with Pakistan. He said the Indian Army too will maintain its presence on its side.

Indian and Chinese militaries have been on a standoff in several areas along the Line of Actual Control (LAC) in eastern Ladakh for over 17 months. Both sides had disengaged from a number of friction points this year following a series of talks; however military analysts believe that keeping in view India’s hegemonistic designs, it won't be long before they get "another beating by the Chinese".

A BBC report of 16 June 2020 confirmed the killing of at least 20 Indian soldiers in a clash with Chinese forces in a disputed Himalayan border area, Indian officials say. The BBC had said the incident followed rising tensions and was the first deadly clash in the border area in at least 45 years.

Initially, the Indian army initially said three of its soldiers had been killed, adding that both sides suffered casualties, but later admitted that a number of critically injured soldiers had died of their wounds.

According to defence analysts, the images have been released by China, following Indian media’s propaganda. The pictures give clear evidence of how the Indian troops were defeated by the Chinese army while hundreds were captured after they were overcome by the Chinese soldiers.

Top Chinese diplomat calls for China, US to mend relations

Indian farmers to step up protests after eight killed in clashes

A scourge lifted from the katcha belt

A new type of monster