It is nearly impossible to determine how human language developed and what could have been the phenomenon that triggered the formation of a mutually intelligible communication mechanism. As a semiotic and communication student, I know the theory of Language Acquisition Device (LAD) that claims the human mind is hard-wired to process and program language system while its parallel behavioural theory claims that language is acquired with outer interaction, thus considered an embodied experience. The human brain learns language through embodied experiences and its semantics are based on the very first toddler experiences which later embed into the thought process and justify the concept of image schema.

The human brain acquires language through sense perception leaving aside the idea of how language came into being. An interesting point is that language is a humanist phenomenon and is directly linked to human evolution. It is hard to claim that human beings are still evolving or have reached a level that can be considered ultimate, but one thing is for sure, that language itself is an evolving phenomenon. From simple gestures to communicate fear, hunger, and joy, language is now capable of complex processes like propagation and negotiation.

Languages are usually based on a semiotic system of signifier and signified, and their relation is arbitrary. The concrete or abstract, whatever human beings encounter in their immediate surrounding are tagged by a linguistic code. And the logic behind an assigned linguistic code to an object or idea/thought/emotion is unknown hence it goes so deep that it creates strong associations with the human cognitive system.

Why a chair is called a chair is a separate debate, but the word chair and its immediate semiotic web is a tangible reality. My point of interest is that; is it possible that the minimal language unit “a word” created by humans can be detached from humans and exist in isolation?

Language as the primary source of thought process has a binary opposition with non-linguistic forms, such as visual art. Visual art is a mysterious land, with artists having tried before to detach the human as an object from human experiences, such as in Cubist Art and Dadaism. Cubism is a conscious effort of conveying meaning without involving humans as a carrier. While watching the work of Austrian symbolist painter Gustav Klimt in Vienna, I figured that dehumanization of language was a rare and far-fetched idea, until linguist philosophers and visual artists like Amin Rehman opted for it as a medium of expression. My recent search for symbolist and absurd art helped me to better appreciate Rehman’s work who is a multidisciplinary visual artist since the 1980s.

Originally from Pakistan, he studied at the National College of Arts (Lahore, Pakistan), the University of Manchester (UK), and the University of Windsor (Ontario, Canada). Rehman’s work has been shown in over 100 art exhibitions all over the world including at Saint Mary’s University Art Gallery, Halifax, Nova Scotia, McIntosh Gallery, University of Western Ontario, Art Gallery of Mississauga Queens Museum of Art, New York, Tehran Museum, Iran, Cultural Festival Exhibition, Melbourne, Australia, Victoria and Albert Museum England and at several exhibitions in Karachi, Islamabad, and Lahore.

His work presents the unique aspect that language can be dehumanized and can itself stand alone as a sole carrier of meaning. The phenomenon Rehman has created challenges the fact that the human brain has evolved to its ultimate form. Rehman highlighted the fact that the human cognitive system is capable enough to process language not horizontally or vertically but, in any way, or direction. Each linguistic unit is autonomous in identity and does not require any suffix in terms of semantics and syntax to be meaningful. According to Rehman’s experimentation, pragmatics is the sole requirement to perceive meanings. He is not only an Avant-Garde artist in linguistic-visuals, but blurred the boundaries between linguistic units and abstraction. With his brush, linguistic units can become an abstraction yet contain lucidity at the same time. Words stand alone as a performer and perform an act with all the emotions. In Rehman’s paintings, words can be sad, angry, happy ambitious, and mean.

As stated earlier each word signifies a semiotic relevance arbitrary to its phonemes and lexicon; semiotic relevance inherits a signification which of course requires a human carrier for articulation. Rehman’s work is detached from this constraint and can stand alone. The letters and colour are juxtaposed to create a holistic performance, sometimes colour overpowers letter to create deliberate imbalance and subdue effect, sometimes words stand out to play the role of the protagonist, his communique is linear and cyclical depending upon the foliage of letter, font, and colour.

When we see Rehman’s work “White Wash” it predominantly trespasses the boundaries of writing and visual arts, although he enters into the valley of words with a brush in hand and picture in mind yet he masterfully converts the letters into pictures, not static but smiling, crying, yelling, retaliating, regretting characters. He transforms words into characters and put words into the word’s mouth. 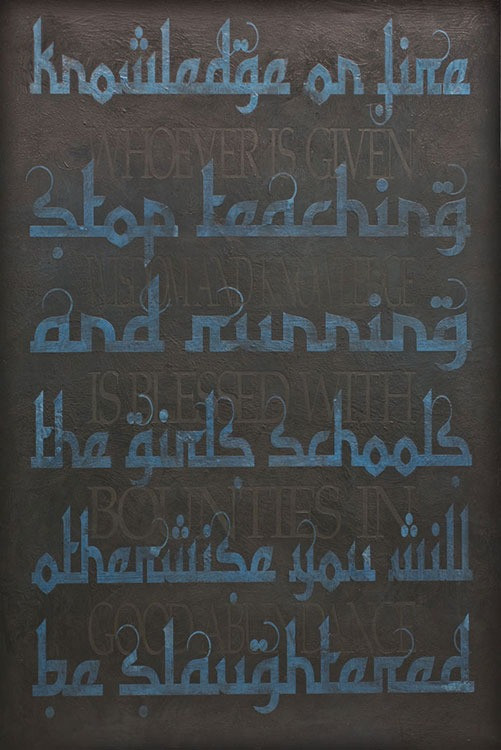 As a true visual art philosopher, Rehman, through his project “White Wash”, even a decade before the War on Terror, highlighted issues such as human non-organic displacement, mass murder, the outcome of war business, identity crises, cultural deprivation, all of which is now a reality. Rehman foresaw this tragedy years ago and used his Avant-Garde genre of text and pictures to tell the world what will happen if the western world does not stop its pursuit of progress under the pretence of being the ultimate flag bearers of humanity. 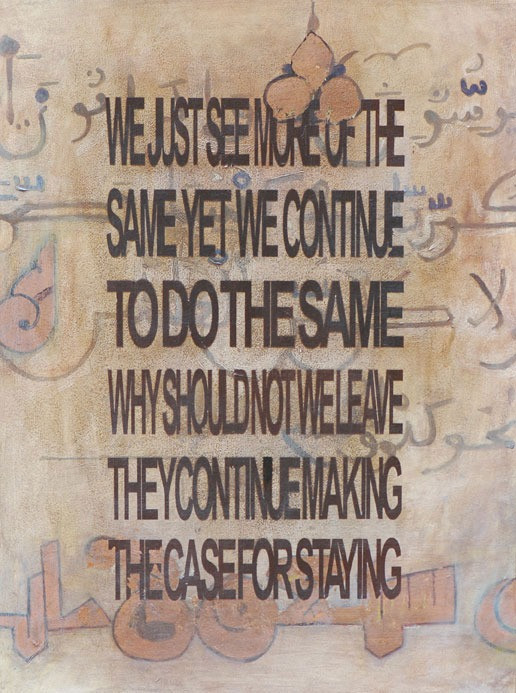 Rehman’s artwork is like a maze, when you get in, you discover a new trajectory upon every turn, yet the turns are endless, just as the meanings behind his masterpieces.