Pakistan’s current account deficit - the gap between country’s higher foreign expenditures and sluggish income - widened to $1.5 billion in August 2021 mainly due to a spike in import payments.

The situation demands urgent attention of the government and calls for measures from the leadership to chop down non-essential imports.

The situation encouraged the Pakistan Tehreek-e-Insaf (PTI) government to enter a stringent loan programme worth $6 billion of the International Monetary Fund (IMF) in May 2019.

The country witnessed a steep climb in the current account deficit for the second time in three months in August 2021. It had recorded a deficit of $1.8 billion in June - the last month of the preceding fiscal year.

The import bill swelled in volumetric as well as value terms. The central bank partially linked the rise in imports to the surge in demand for machinery and raw material for industrial and agricultural output in the wake of government’s policy aimed at expanding the economy.

In addition to this, the skyrocketing prices of commodities in the world market also contributed to the high import payments.

However, the State Bank of Pakistan (SBP) seemed a bit relaxed over the current account deficit as it reminded the public that the country’s foreign currency reserves were near all-time high of around $20 billion.

“The current account deficit rose to $1.5 billion in August 2021 from $0.8 billion in the previous month, while SBP’s foreign reserves rose to an all-time high of $20 billion,” the central bank said on its official Twitter handle.

Despite the robust growth in the import bill, the export earnings have remained sluggish. However, the inflow of foreign currencies into the country on account of workers’ remittances remained strong.

But the steady rise in remittances alone cannot match the amount of foreign currency required to pay for rising imports and repay foreign debt.

The current account balance had stood in surplus at $255 million in August 2020, according to the central bank.

The cumulative current account deficit for the first two months (July and August) of current fiscal year 2021-22 was recorded at $2.29 billion compared to a surplus of $838 million in the same period of last year.

“The buildup in the current account deficit is a cause of concern,” Topline Securities Director Research Syed Atif Zafar said while talking to The Express Tribune. 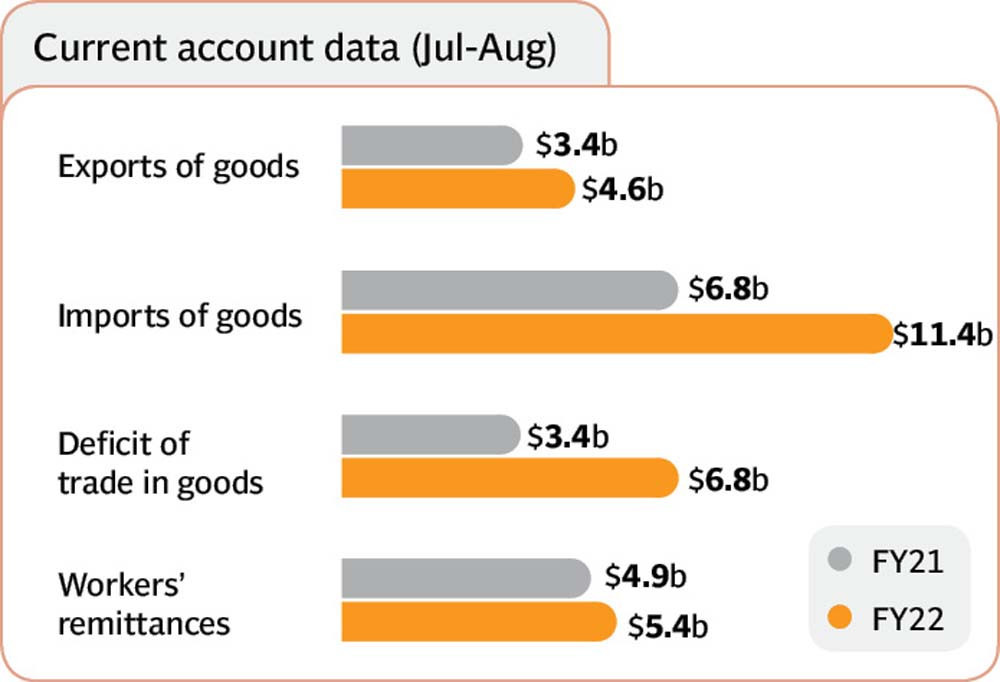 The government and the central bank may consider taking fiscal and monetary measures to control the widening current account deficit.

“The government may consider increasing duty on the import of non-essential goods and cut its spending such as development and non-development expenditures,” he said.

“Besides, the central bank may consider increasing the benchmark interest rate to discourage unnecessary borrowing by the private sector and households.”

“The IMF may also recommend such measures during the sixth review of the economy later this month,” he said.

The government and the SBP, however, are not likely to implement these kinds of measures over the next one to two months considering the fact that the leadership has adopted a policy of expansion in the economy.

The increase in interest rate, cut in development budget and increase in duty on imports would be tantamount to partially compromising on the growth policy, he said.

“The current account deficit of $1.5 billion in a single month should not be problematic considering the record high foreign exchange reserves,” said Pak-Kuwait Investment Company Head of Research Samiullah Tariq.

“If it remains consistently high at the level recorded in August, then it will become a challenge,” he said.

He hoped that the import bill would shrink following a decrease in demand for imported agricultural and food products like cotton, wheat and sugar.

The output of such products is on the rise in local fields. In addition to this, the government may also consider decelerating imports of cars through policy measures.