At least four personnel of the Frontier Corps were martyred on Sunday while over 20, including two passers-by, were said to be injured in a suicide attack on an FC checkpost on Mastung Road, in Quetta.

According to the Counter-Terrorism Department (CTD) Balochistan's spokesperson, the blast was a "suicide attack" and was carried out near the Sona Khan security checkpoint.

The officer added that CTD personnel had reached the site of the incident and an investigation had been launched. The area has been cordoned off, the CTD official added.

According to security forces, the vehicle targeted in the incident was providing security to vegetable sellers belonging to the Hazara community.

Following the incident, security was enhanced in the area and the province, including at the entry and exit routes of the city.

According to security sources, the suicide bomber was on a motorcycle laden with five kilogramme of explosive material when he struck the vehicle.

The sources said that the vehicle was targeted after the attackers conducted thorough reconnaissance of the area.

Prime Minister Imran Khan condemned the suicide attack and condoled the families of those who lost their lives in the incident.

"Condemn the TTP suicide attack on FC checkpost, Mastung road, Quetta. My condolences go to the families of the martyrs & prayers for the recovery of the injured," the premier said on Twitter.

"Salute our security forces & their sacrifices to keep us safe by thwarting foreign-backed terrorists' designs," he added.

Condemn the TTP suicide attack on FC checkpost, Mastung road, Quetta. My condolences go to the families of the martyrs & prayers for the recovery of the injured. Salute our security forces & their sacrifices to keep us safe by thwarting foreign-backed terrorists' designs.

Governor Balochistan Syed Zahoor Ahmad Agha expressed grief at the deaths of the personnel and injuries to others in the terrorist attack.

Condemning the incident, he directed the law enforcement personnel to utilise all possible resources to arrest the culprits.

The governor further said that the nation can defeat the ill designs of the terrorists through national unity. He prayed for the martyred men and for the early recovery of the injured. 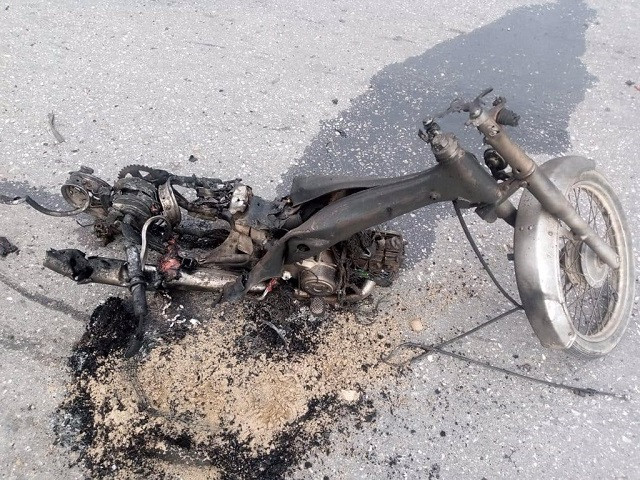 The mangled remains of a motorcycle damaged in the Mastung blast. PHOTO: EXPRESS

In a statement, Shehbaz said that the deterioration of law and order was a cause of concern. He prayed for the departed souls and patience for the families of the bereaved.

National Assembly Deputy Speaker Qasim Suri also strongly condemned the attack and expressed grief at the loss of lives in the incident.

He directed provision of every possible relief to the injured and expressed sympathy with the affected families.

Suri said the elements involved in the blast were enemies of humanity and will be dealt with strictly.

He said that anti-Pakistan elements were attempting to sabotage peace in the province, adding that they will not succeed in their nefarious designs.

On August 14, a paramilitary soldier was martyred while two others were injured in an attack on a Frontier Corps (FC) vehicle near Loralai, Balochistan, said an Inter-Services Public Relations (ISPR) statement.

In an exchange of fire, Naik Sharif embraced martyrdom while Major Qasim and a soldier were injured. The Injured were evacuated to CMH Quetta, the ISPR stated, adding that at least three militants were killed in retaliatory firing by FC personnel.

In June this year, at least five FC men were martyred in a terrorist attack in the Sibi district of Balochistan. The FC men, deployed in the mountainous area of Sangan, located between Sibi and Harnai districts, had come under attack while patrolling.

Philippines grants US greater access to bases amid China concerns