Private venture here to save football

As a moment in history, the image of Donahue's departure could be cast alongside that of a Soviet general

Evacuees wait to board a Boeing C-17 Globemaster III during an evacuation at Hamid Karzai International Airport in Kabul, Afghanistan, August 23, 2021. PHOTO: REUTERS

Carrying his rifle down by his side, Major General Chris Donahue, commander of the storied 82nd Airborne Division, became the last US soldier to board the final flight out of Afghanistan a minute before midnight on Monday.

Taken with a night vision device from a side window of the C-17 transport plane, the ghostly green and black image of the general striding toward the aircraft waiting on the tarmac at Kabul's Hamid Karzai Airport was released by the Pentagon hours after the United States ended its 20-year military presence in Afghanistan. 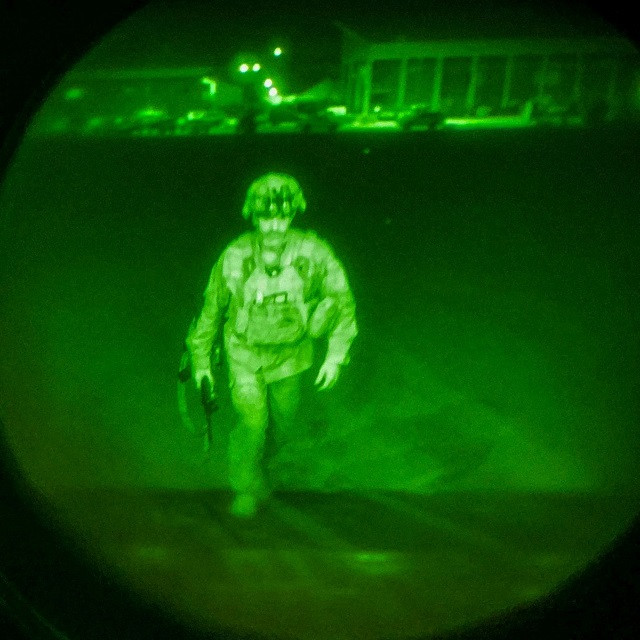 US Army Major General Chris Donahue, commander of the 82nd Airborne Division, steps on board a transport plane as what the XVIII Airborne Corps calls the last US soldier to leave Kabul, Afghanistan. Photo: Reuters

As a moment in history, the image of Donahue's departure could be cast alongside that of a Soviet general, who led an armoured column across the Friendship Bridge to Uzbekistan, when the Red Army made its final exit from Afghanistan in 1989.

Completing a military operation that with the help of allies succeeded in evacuating 123,000 civilians from Afghanistan, the last planeload of US troops left under cover of the night.

Though it is a still image, Donahue appears to be moving briskly, his face expressionless. He is wearing full combat gear, with night vision goggles atop his helmet, and a rifle by his side. He had yet to leave Afghanistan behind, and reach safety.

In contrast, the images of General Boris Gromov, commander of Soviet Union's 40th Army in Afghanistan, show him walking arm-in-arm with his son on the bridge across the Amu Darya river carrying a bouquet of red and white flowers.

The US and Soviet withdrawals from a country that has become known as a graveyard for empires were conducted in very different ways, but at least they avoided the calamitous defeat suffered by Britain in the First Anglo-Afghan War in 1842.

The abiding image from that conflict is Elizabeth Thompson's oil painting "Remnants of an Army" depicting a solitary exhausted rider, military assistant surgeon William Brydon, swaying back in the saddle of an even more exhausted horse in the retreat from Kabul.

When Russia's Red Army left, a pro-Moscow communist government was still in power and its army would fight on for three more years, whereas US-backed Afghan government had already capitulated and Kabul had fallen to the Taliban a little over two weeks before the Aug 31 deadline for US troops to depart.

Making an orderly exit, the last of Gromov's 50,000 troops still suffered isolated attacks as they drove northwards to the Uzbek border, though they had paid mujahideen groups to secure safe passage along the way.

Gromov's column crossed the Friendship Bridge on Feb. 15, 1989, ending the Soviet Union's 10-year war in Afghanistan, during which more than 14,450 Soviet military personnel were killed.

Asked how he felt about returning to Soviet soil, Gromov is reported to have answered: "Joy, that we carried out our duty and came home. I did not look back."

The final US evacuation of Kabul will be judged by how many people were brought out, and how many were left behind.

But Donahue and his comrades will carry harrowing images from their chaotic last days in Kabul; parents passing babies to them across the razor wire, two young Afghans falling from a plane climbing high in the sky, and worst of all, the aftermath of an Islamic State suicide bomb attack outside the airport on Aug 26 that killed scores of Afghans and 13 of their own.

Asked how he felt about returning to Soviet soil Gromov is reported to have answered Joy that we carried out our duty and came home. I did not look back. And then came the Americans......... Rest is history

Taliban and the recognition challenge

We now have an opportunity to rebuild, reunite: Taliban leader

Rockets fired at Kabul airport as US troops pull out

Blast near Kabul airport was US military strike on ISIS-K: officials

US in final phase of Kabul evacuations, Taliban says ready to take over airport

Rana Shamim's name placed on PNIL 'so he doesn't run away': Rashid