Several killed in flag-waving protests against Taliban in Afghanistan

'If there's American citizens left, we're going to stay until we get them all out', says US President

US troops may stay in Afghanistan past an Aug 31 deadline to evacuate Americans, President Joe Biden said on Wednesday, and the Pentagon said the US military does not currently have the ability to reach people beyond the Kabul airport.

"If there's American citizens left, we're going to stay until we get them all out," Biden told ABC News in an interview conducted on a day many US lawmakers pressed him to extend the deadline that he had set for a final pullout.

Biden has come under fierce criticism for his handling of the withdrawal, which in recent days has been dominated by scenes of chaos in and around the Kabul airport with people desperately trying to get out of the country.

Biden defended his decisions, saying problems were inevitable in ending the 20-year US involvement there.

"The idea that somehow, there's a way to have gotten out without chaos ensuing, I don't know how that happens," he said.

He also said the Taliban is cooperating for now in helping get Americans out of the country but "we're having some more difficulty" in evacuating US-aligned Afghan citizens. 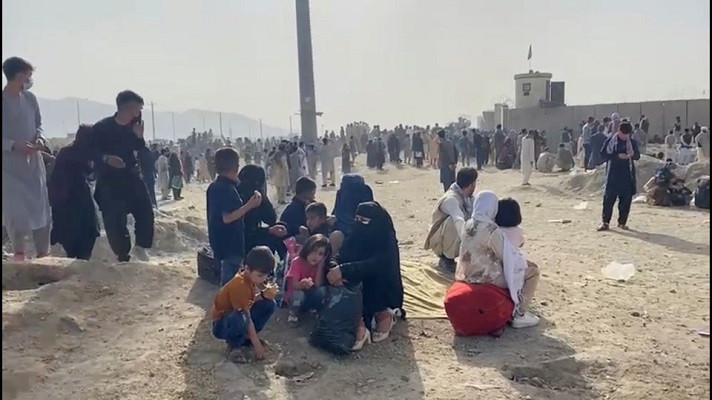 People gathered outside the airport react to gunfire, in Kabul, Afghanistan August 18, 2021 in this still image taken from video. PHOTO: REUTERS

The speed with which Taliban forces retook Afghanistan, as the US and other foreign forces withdrew, has led to chaotic scenes at the airport with diplomats, foreign citizens, and Afghans trying to flee but they are being impeded by crowds and Taliban checkpoints.

"We're going to do everything we can to continue to try and deconflict and create passageways for them to get to the airfield. I don't have the capability to go out and extend operations currently into Kabul," US Defense Secretary Lloyd Austin told reporters at the Pentagon.

A top US diplomat separately said on Wednesday the United States expects the Taliban to allow Afghans who wish to leave Afghanistan to depart safely.

Austin said the United States was not satisfied with how many people were being evacuated.

"It's obvious we're not close to where we want to be in terms of getting the numbers through," he said. 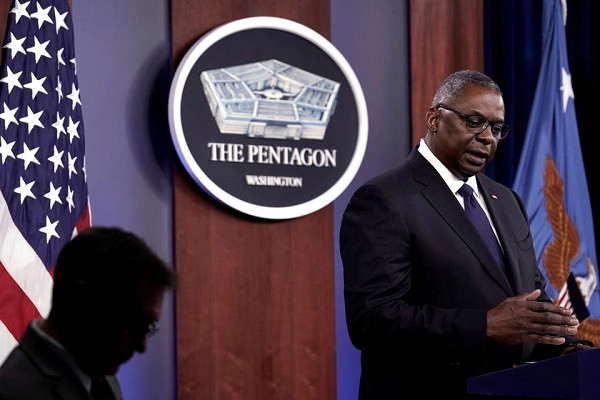 Biden and Vice President Kamala Harris discussed ways to accelerate evacuations of Americans and refugees from Afghanistan with his national security team on Wednesday, a White House official said.

Biden did not take questions after delivering a White House speech about coronavirus vaccine booster shots, turning his back and walking away as reporters shouted.

Reuters reported on Tuesday increasing concern from officials about how many at-risk Afghans could be evacuated.

US troops guarding the evacuation effort fired some shots in the air overnight to control crowds, but there were no indications of casualties or injuries, the Pentagon said earlier on Wednesday.

Austin said there are about 4,500 US military personnel in Kabul and there "have been no hostile interactions with the Taliban, and our lines of communication with Taliban commanders remain open."

Speaking to reporters alongside Austin, General Mark Milley, the chairman of the Joint Chiefs of Staff, said there had been no intelligence to indicate that the Afghanistan security forces and government would collapse in 11 days, as they did.

Milley said intelligence had "clearly indicated, multiple scenarios were possible," including a Taliban takeover following a rapid collapse of Afghan security forces and the government, a civil war or a negotiated settlement.

"The timeframe of rapid collapse - that was widely estimated and ranged from weeks to months and even years following our departure," Milley said.

The two top Republicans in the US Congress, Kevin McCarthy of the House of Representatives and Mitch McConnell of the Senate, requested a classified briefing for the "gang of eight" - the top eight relevant lawmakers - for a status report on the evacuation.

"It is of the utmost importance that the US government account for all US citizens in Afghanistan and provide the necessary information and means of departure to all those Americans who desire to leave the country," they wrote in a letter to Biden.

Both Austin and Milley, who have served in Afghanistan, acknowledged that troops and veterans were finding the images from the evacuation troubling.

"I'm hearing strong views from all sides on this issue ... what's important is that each of us will work our way through this in our own way," Austin said.