Wouldn't have broken five bones, had I been wearing a seat belt: Ayesha Omar

'You can disagree with her ways, but you can never agree with hurting anyone,' shared the VJ

Television host Anoushey Ashraf recently took to her Instagram story to remember the slain social media star Qandeel Baloch. 2021 marks five years since the passing of Baloch, who was 25. Ashraf shared a message relating to the importance of kindness, reflecting on the time she met Baloch, with the latter posting a picture with her on social media later. 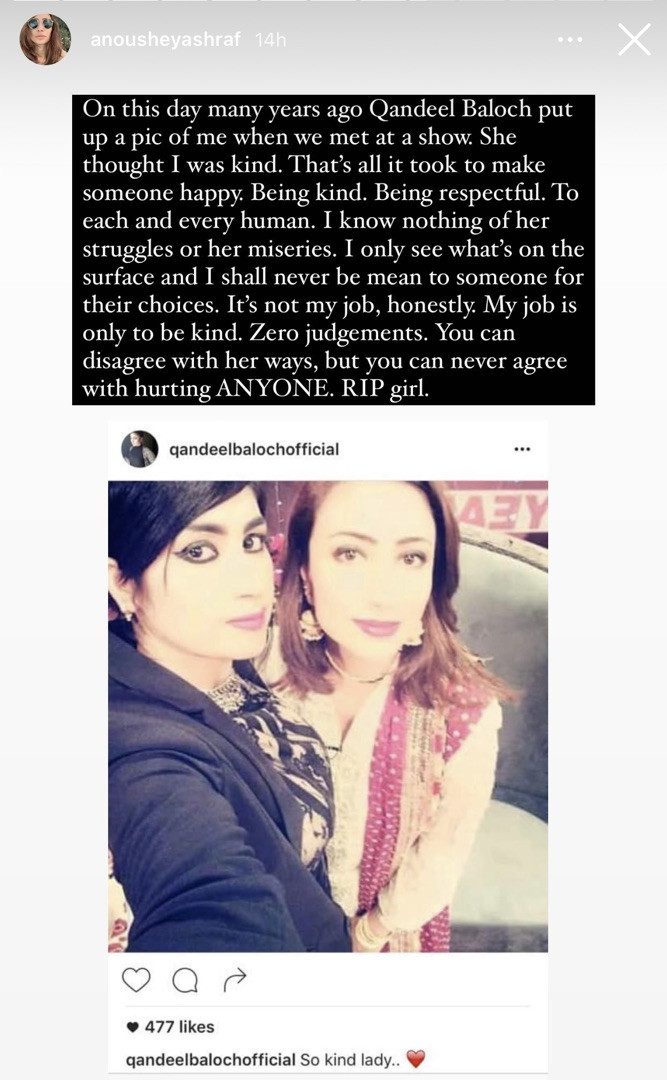 The VJ wrote, “On this day, many years ago, Qandeel Baloch put up a pic of me when we met at a show. She thought I was kind. That’s all it took to make someone happy. Being kind. Being respectful. To each and every human.”

She continued, “I know nothing of her struggles or her miseries. I only see what’s on the surface and I shall never be mean to someone for their choices. It’s not my job, honestly. My job is only to be kind. Zero judgements.”

“You can disagree with her ways, but you can never agree with hurting anyone. RIP girl,” she concluded.

Baloch – born Fouzia Azeem – was strangled to death in her house in Multan’s Karimabad area. The killing took place on July 16, 2016, and just days after, brothers assumed full responsibility for it, citing Qandeel's notoriety and social pressure as the main reasons.

The notorious social media star had, ironically, made a risque Facebook video once with which she hoped to change “the typical orthodox mindset” of the people in Pakistan, wherein nearly 500 women are killed every year in the name of “honour.”