A top UN human rights official has deplored the death in custody of an 84-year-old Indian Christian priest who campaigned for the rights of tribal people and was denied bail after being detained under an anti-terrorism law.

Father Stan Swamy was arrested last year on suspicion, which he denied, of ties to a banned radical leftist group that police accused of having instigated violence in Maharashtra state in 2018.

His death will revive criticism of the increasing use of the anti-terrorism statute under nationalist Prime Minister Narendra Modi's government. Opponents of the law say it is used to hound people critical of the government.

Swamy, who suffered from Parkinson's disease and also contracted Covid-19 while in prison, died in a Mumbai hospital on Monday. More than a dozen people gathered outside the St Peter's Church in Mumbai, where his funeral service was being held, to protest over his death.

The news from #India today is devastating. Human Rights Defender & Jesuit priest Fr Stan Swamy has died in custody, nine months after his arrest on false charges of terrorism. Jailing HRDs is inexcusable. He explains his work here: https://t.co/kKPhM6IaHu pic.twitter.com/YoEpst0ol2

At a briefing in Geneva, UN human rights commission spokesperson Liz Throssell said the agency had repeatedly urged India's government to protect a robust civil society. "We are very concerned with the way he was treated," she said, calling for the release of people detained without proper legal basis.

In previous court hearings, the government denied accusations of mistreatment of Swamy, and said the law must be allowed to take its course.

Supporters of Modi's Bharatiya Janata Party said there could be no tolerance of violence by Maoist guerrillas, some of whom operate in remote areas where tribal people live. 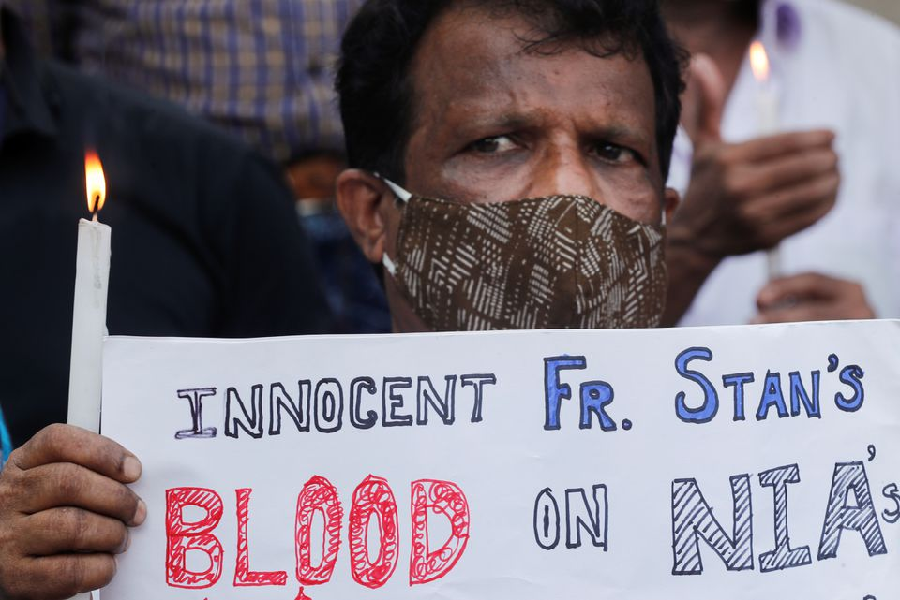 Swamy was the oldest of a dozen people, most of them academics and human rights activists, accused of violence in 2018 and imprisoned under the Unlawful Activities Prevention Act, which allows for prolonged detention for questioning.

"The government should have done something earlier...They took too long and didn't do anything for (Swamy)," said Karen D'mello, a former local government official present at the Mumbai protest. "I don't think he needed to be in (prison) first of all, he was wrongly accused."

Swamy denied links to outlawed groups and repeatedly asked for bail, recently telling court in a video conference that his health had worsened in prison and he would soon die.

He had said he had difficulty eating and drinking because of his Parkinson's and asked the court to allow him to use a straw and sipper. The court had agreed after nearly three weeks.