Karachi fears another viral spell in advance of Eid

An Afghan National Army soldier stands guard at the gate of Bagram US air base, on the day the last of American troops vacated it, Parwan province, Afghanistan July 2, 2021. PHOTO: REUTERS
KABUL:

American troops pulled out of their main military base in Afghanistan on Friday, leaving behind a piece of the World Trade Center they buried 20 years ago in a country that could descend into civil war without them.

The quiet departure from Bagram Air Base brought an effective end to the longest war in US history. It came as the Taliban insurgency ramps up its offensive throughout the country after peace talks sputtered.

The Pentagon said the turnover of Bagram to Afghan security forces was a "key milestone" in the withdrawal, but insisted the US military still has the authority to protect Afghan forces.

"Those authorities still exist," Pentagon spokesperson John Kirby told reporters. He did not give a timeline for when they might end. 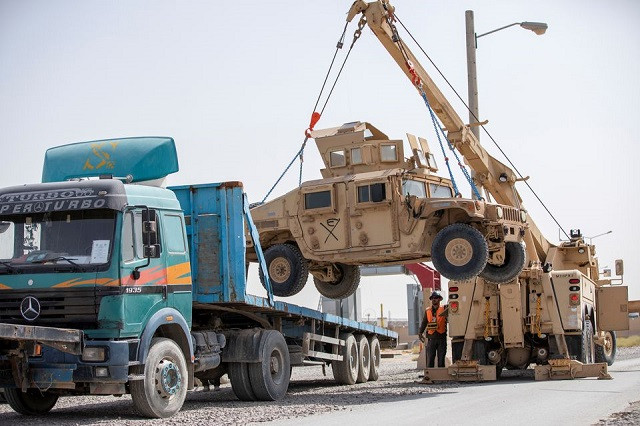 US Army soldiers and contractors load High Mobility Multi-purposed Wheeled Vehicles, HUMVs, to be sent for transport as US forces prepare for withdrawl, in Kandahar, Afghanistan, July 13, 2020. PHOTO: REUTERS

President Joe Biden said the troops' departure is on track, but some American forces will still be in Afghanistan in September as part of a "rational drawdown with allies."

He called repeated queries from reporters about the withdrawal timeline "negative" on Friday, ahead of the July 4 US Independence Day holiday weekend. "I want to talk about happy things, man," Biden said. "It's the holiday weekend. I'm going to celebrate it. There's great things happening."

Bagram, an hour's drive north of Kabul, was where the US military coordinated its air war and logistical support for its entire Afghan mission. The Taliban thanked them for leaving. 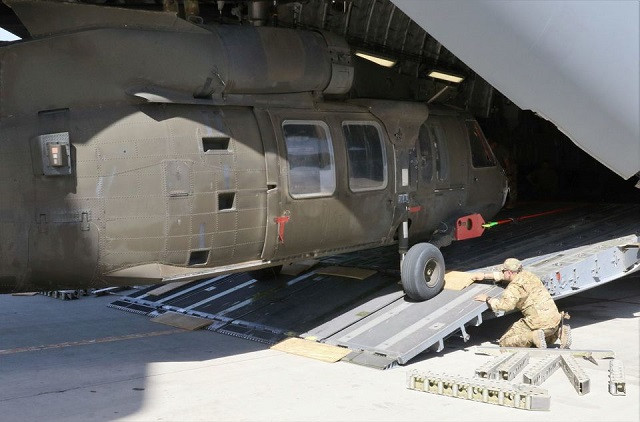 Aerial porters work with maintainers to load a UH-60L Blackhawk helicopter into a US Air Force C-17 Globemaster III during the withdrawl of American forces in Afghanistan, June 16, 2021. PHOTO: REUTERS

"We consider this withdrawal a positive step. Afghans can get closer to stability and peace with the full withdrawal of foreign forces," Taliban spokesperson Zabihullah Mujahid said.

Other Afghans were more circumspect. "The Americans must leave Afghanistan and there should be peace in this country," said Kabul resident Javed Arman.

But he added: "We are in a difficult situation. Most people have fled their districts and some districts have fallen. Seven districts in Paktia province have fallen and are now under Taliban control."

More than 3,500 international troops were killed in Afghanistan. A Western diplomat in Kabul said Washington and its NATO allies had "won many battles, but have lost the Afghan war."

It was at Bagram, on a plain hemmed in by the snow-capped peaks of the Hindu Kush, that New York City firefighters and police buried a piece of the World Trade Center in December 2001, days after the Taliban were toppled for harboring Osama bin Laden. 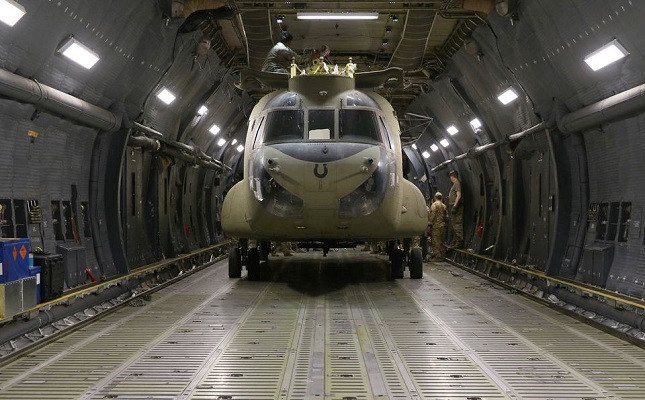 Aerial porters work with maintainers to load a CH-47 Chinook helicopter into a US Air Force C-17 Globemaster III during the withdrawl of American forces in Afghanistan, June 16, 2021. PHOTO: REUTERS

It was also here that the CIA ran a "black site" detention center where terrorism suspects were subjected to abuse that President Barack Obama subsequently acknowledged as torture.

The base later swelled into a sprawling fortified city for a huge international military force, with fast food restaurants, gyms and a cafe serving something called "the mother of all coffees." Two runways perpetually roared. Presidents flew in and gave speeches; celebrities came and told jokes.

An Afghan official said the base would be officially handed over at a ceremony on Saturday.

US officials have told Reuters that the vast majority of troops have left Afghanistan, ahead of the timetable set by Biden, who had promised they would be home by Sept 11, the 20th anniversary of the attack that brought them to Afghanistan.

General Austin Miller, currently the top US commander in Afghanistan, will leave the country in the coming days, handing over to General Kenneth McKenzie, who heads US Central Command, the Pentagon said.

Biden said he thinks the government of Afghan President Ashraf Ghani, with whom he held talks at the White House last week, has the capacity to withstand recent Taliban advances. But he said Ghani's government should deal with "internal issues," an apparent reference to infighting among rival factions. 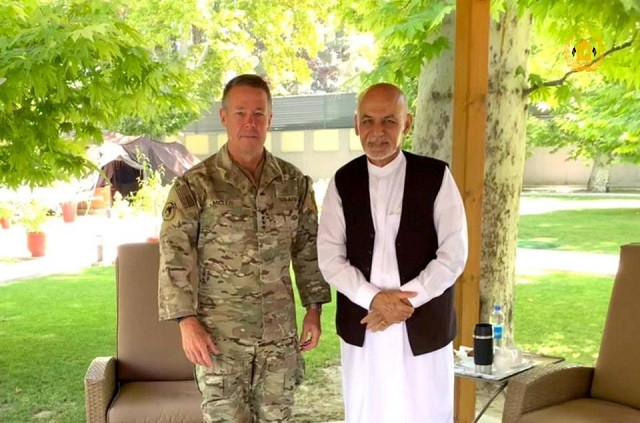 Washington agreed to withdraw in a deal negotiated last year under Biden's predecessor, Donald Trump. Biden rejected advice from generals to hang on until a political agreement could be reached between the insurgents and Ghani's US-backed government.

Biden told Ghani in Washington last week the Afghans must decide their own future. Ghani said his job was now to "manage the consequences" of the US withdrawal.

In exchange for the US departure, the Taliban promised not to allow international terrorists to operate from Afghan soil. They committed to negotiate with the Afghan government, but talks in the Qatari capital Doha made little progress.

The US Embassy in Afghanistan this week said Washington was firmly committed to assisting Afghanistan and would provide security assistance of $3 billion in 2022.

The Taliban refuse to declare a ceasefire. Afghan soldiers have been surrendering or abandoning their posts. Militia groups that fought against the Taliban before the Americans arrived are taking up arms again. 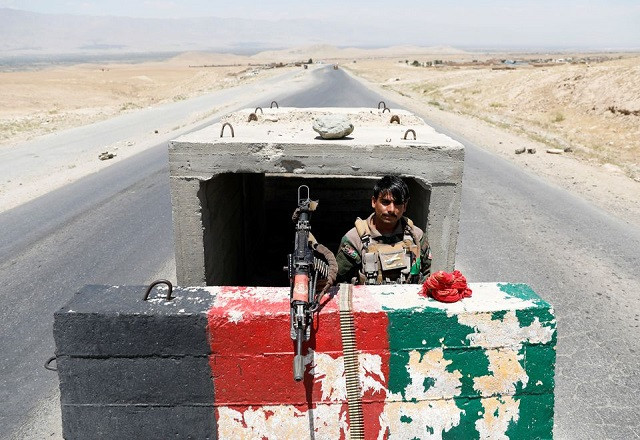 An Afghan National Army soldier stands guard at a checkpoint near Bagram US air base, on the day the last of American troops vacated it, Parwan province, Afghanistan July 2, 2021. PHOTO: REUTERS

Three officials with knowledge of the discussions said the United States has asked three Central Asian nations - Kazakhstan, Tajikistan and Uzbekistan - to provide a temporary home to about 10,000 Afghans who worked with either US or allied forces.

Several European nations were also providing refuge to hundreds of Afghan employees and their families as they faced a direct threat from the Taliban.

Since Biden's announcement that he would press ahead with Trump's withdrawal plan, insurgents have advanced across Afghanistan, notably in the north, where for years after their ouster they had a minimal presence.

Afghan soldiers stand guard at a checkpoint outside the US Bagram air base, on the day the last of American troops vacated it, Parwan province, Afghanistan July 2, 2021. PHOTO: REUTERS

US leaves its epicentre of Afghan war

Biden says US troops drawdown in Afghanistan is on track

Geopolitics around a changed Afghanistan

Western forces pack up to end their war, Afghans 'manage the consequences'