Average rate clocks in at 8.9% during FY21, according to Pakistan Bureau of Statistics

The government could not keep inflation under check in its third year too that accelerated to nearly 9%, significantly higher than the official target of 6.5% and becoming the biggest concerns for Prime Minister Imran Khan.

During fiscal year 2020-21 that ended on Wednesday, the average rate of inflation rose to 8.9%, the Pakistan Bureau of Statistics (PBS) reported on Thursday.

It was the third successive year when the Pakistan Tehreek-e-Insaf (PTI) government could not achieve its annual target due to cost-push factors. The government’s decision to increase administrative prices like electricity and gas and lax controls over food items prices caused inflation during the last fiscal year.

The official bulletin showed that motor fuel became 40% more expensive than a year ago while electricity prices also increased 21.1%. The prices of sugar and wheat, which Prime Minister Imran Khan was personally monitoring, increased 21.5% and 19%, respectively, showed the PBS official release. 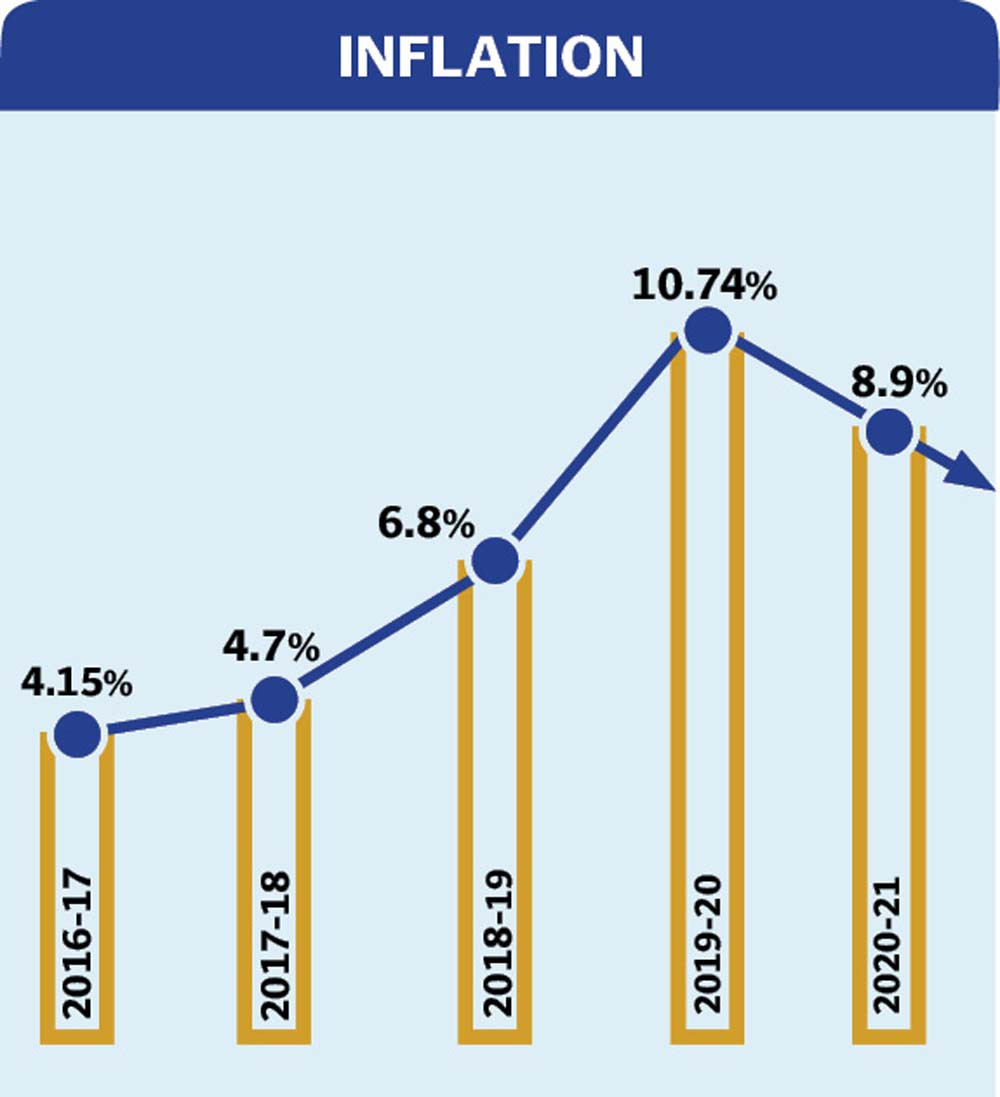 The average inflation rate in urban areas was 8.2% in the last fiscal year but it remained over 10% in the rural parts of the country, affecting people with lesser income the most.

The PBS reported that prices remained significantly high in both rural areas and the cities, although the pace of increase was slower than the preceding month but still close to double digits. The inflation rate in both urban and rural areas remained at 9.7% in June. There was significant reduction in food inflation in both parts of the country.

Core inflation - calculated by excluding food and energy items - decelerated slightly to 6.7% in urban areas in June and to 7.1% in rural parts, reported the national data collecting agency.

The food group saw a price increase of 10.5% in June from the same month a year ago. Within the food group, prices of non-perishable food items rose 12.9% on an annualised basis. But the prices of perishable goods decrease 3.9% last month.

The inflation rate for the housing, water, electricity, gas and fuel group - having one-fourth weight in the basket - increased to 9.1% last month. Average prices for the clothing and footwear group rose almost 10% in June. Prices related to transportation rose 17.4% due to higher fuel cost.

PBS stated that petrol prices jumped 40.4% in June this year over a year ago after the government again started increasing prices. Electricity rates were higher by 21.1% than a year ago. The liquefied hydrocarbons cost increased 31%, garments prices too increased over 12% and doctors’ fee saw an increase of over 13%.

In June, eggs prices shot up by 33%, followed by 32% increase in prices of mustard oil and wheat prices were up by 19% over a year, according to the PBS. Sugar prices went up 21.5% in June as compared to a year ago while milk rates also increased by 14%, stated the national data collecting agency. Meat prices have been constantly on the rise and also increased by nearly 17% in June over a year ago.

The Sensitive Price Index based inflation increased by 17.6% in June as compared to a year ago. The SPI comprises of 53 essential commodities, many of them are commonly used.