Site of the explosion in Johar Town. Photo: EXPRESS
LAHORE:

Three people died and 21 others, including women and children, sustained injuries when an explosives-laden vehicle exploded near the house of Hafiz Saeed, leader of the banned Jamaat-ud-Dawa (JuD), in Lahore’s Johar Town neighbourhood on Wednesday.

Top police officials were uncertain about the nature of the blast, while medics said that injured were hit by ball-bearing shrapnel. Punjab police chief Inam Ghani, who described the blast as an “unfortunate terrorist act”, said the nature of explosion would be determined after a thorough analysis by experts.

Several buildings and vehicles near the scene of the explosion were damaged, witnesses said. They added that several victims were lying in pool of blood and crying for help, as the area was filled with dust immediately after the blast.

Punjab Emergency Service (Rescue 1122) said that they received a call at around 11.07 am in which the caller informed them about a blast due to gas leakage. However, when the rescuers reached the spot, they found a horrific situation, it added.

Capital City Police Officer (CCPO) Ghulam Mehmood Dogar, and Deputy Inspector General Investigations Shariq Jamal reached the spot, as the police and the rangers personnel cordoned off the area and started a rescue operation. Rescue teams shifted the injured to a local hospital.

According to investigators, preliminary investigation suggested that around 25-30 kilogrammes of explosives could have been used in the blast, as it had left a three feet deep and five feet wide crater at the spot, while shrapnel flew as far as 500 metres.

Talking to the media personnel, officials refrained from saying anything with certainty about the nature of the explosion. However, the victims and their families spoke about the possibility of a terrorist attack. A woman also revealed about the movement of a suspicious motorcycle and a vehicle in the area. 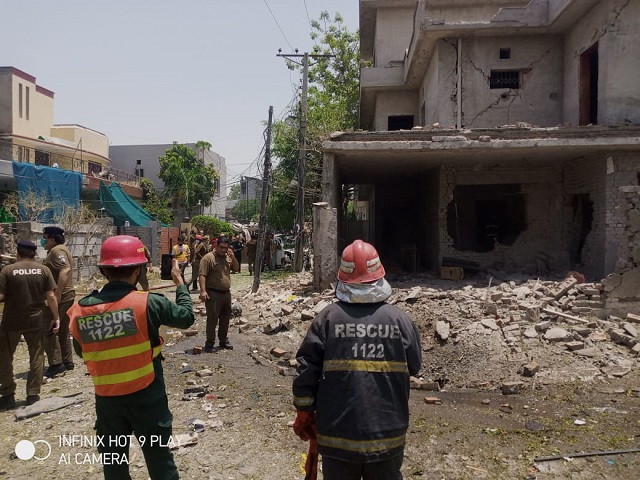 Site of the explosion. Photo: EXPRESS

Inam Ghani, the inspector general of police, told reporters at the crime scene that the nature of blast would be determined after the analysis by experts. He did not rule out the possibility of a foreign hand being involved. 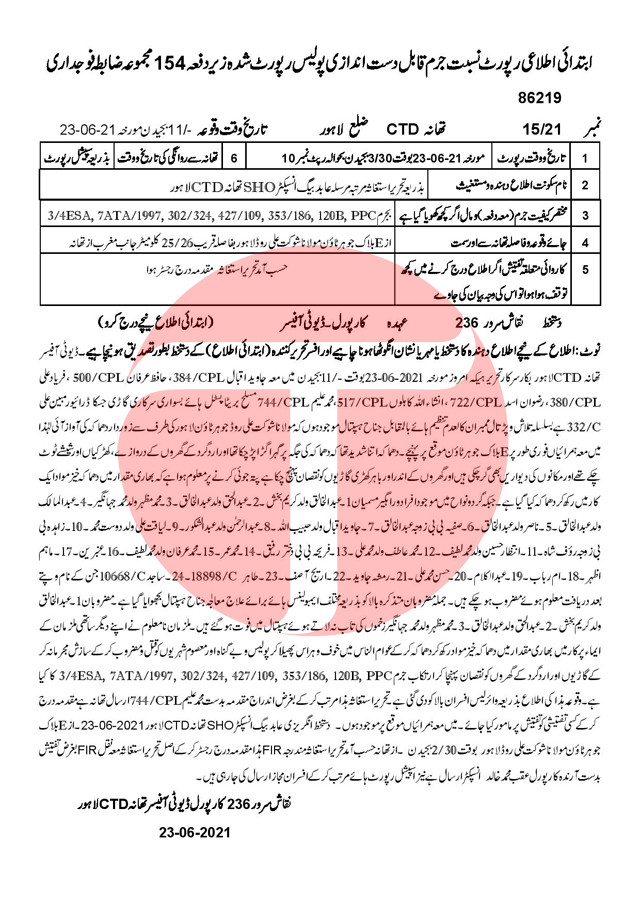 Punjab The Punjab IGP asserted that the target of the explosion was the law-enforcement agencies (LEAs). “We received at least 65 threat alerts this year. The last alert was also about the attack on LEAs,” Ghani told the media personnel. 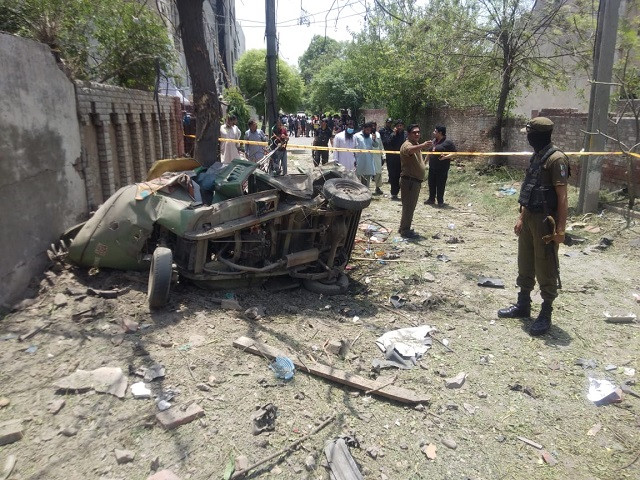 A rickshaw destroyed in the bombing. Photo: EXPRESS

When asked about the comments made by Jinnah Hospital’s medical superintendent that injuries were caused by ball-bearings, Ghani said this might happen due to vehicle-born improvised explosive device (IED). “As the metal pieces are broken down, each piece serves as a bullet,” he said.

“Investigation is under way from every aspect so to say anything about it [at this stage] will be premature and may affect the investigation,” he added.

The sound of the explosion was heard over three to four kilometres. It ripped off the facade of three to four houses, while multiple vehicles were destroyed. Also a number of houses were partially damaged while dozens have had their windowpanes smashed.

“The broken pieces of some vehicles and other articles fell onto rooftops of houses as far afield as 400-500 meters,” Shakoor Ahmad, a local resident, said. CCTV footage later showed a large piece of vehicle – probably chassis – reportedly used for carrying explosives – falling on a showroom 400-500 meters away.

The blast claimed at least three lives and left over 21 injured. The deceased included five-year-old Abdul Haq and 30-year-old Abdul Khaliq. The identity of the third deceased could not immediately be ascertained.

The injured included Police Constable Tahir, who received serious injuries to his shoulder. A photo of him bleeding from his shoulder and drinking a glass of water went viral on social media.

The first information report (FIR) of the incident was registered by the CTD, confirming it to be a vehicle-born IED explosion. The investigations had focused on a black Corolla vehicle that might have been used in the explosion. Many parts of the vehicle, including its chassis number had been damaged. Reportedly, investigators had found that the vehicle was sold on an open letter.

Reportedly, the authorities had taken the owner of the vehicle into custody from Hafizabad. The investigators were also tracking the movement of the vehicle by using the PSCA cameras installed throughout the provincial capital.

“This way we will be able to stop exposing the progress to the terrorist and HIAs. I hope our media will understand and cooperate with us,” he added. A statement issued from his office later read that he has directed the police officers to refrain from commenting on the incident in the media.

Meanwhile, Punjab Chief Minister Usman Buzdar directed the IGP to investigate and submit a report. He directed the authorities concerned to provide the best possible medical facilities to the injured. Punjab Health Minister Dr Yasmin Rashid also visited the Jinnah hospital, where the injured were being treated.

Interior Minister Sheikh Rashid also sought report of the incident from the Provincial chief secretary and the IGP. According to a press release issued in Islamabad, the minister said that the nature of the blast was being determined, adding the federal government was assisting the Punjab government to investigate into the incident.

Department is procuring 230 carriages for $149m

In a pickle: Police detain 19 after being denied 'free burgers' at Lahore restaurant

Afghan Taliban stronger than ever a year after takeover