One of my most important films: Shahid Kapoor on 'Kabir Singh'

OKB, Saheefa Jabbar and others share stance on PM Imran's take on rape

Several members of the showbiz industry have spoken up after Prime Minister Imran Khan made controversial statements about the cause of sexual violence in Pakistan. The statements triggered a debate that swept the country’s social media, with several celebrities taking to their platforms to speak up against the PM’s victim-blaming. Many called out the PM for blaming women’s clothing soon after news of child molestation by prominent cleric Mufti Aziz-ur-Rahman in a madrassah surfaced online. Actor and comedian Osman Khalid Butt took to Twitter to explain how the root cause of rape is not temptation and lust, but power.

Rape isn't caused by this. Rape is about power. Dominance, a complete lack of empathy, hostility. It diminishes a woman - or a man, or a child - to a sexual object. It is dehumanizing.

Actor Armeena Khan tweeted about how even if women were to lock themselves away, a rapist would attack an animal in her place.

I agree with the first half of your tweet. But please understand that it is not dressing that eggs these individuals on. The filth is in their own heads. Even if you locked the entire female population away they’ll start r*ping animals. A rapist will always be a rapist. https://t.co/wQWLWa4W2v

She also added that women have also been sought out in their homes and that the rapist is the only one at fault.

They do. I’ve literally read headlines where they go looking for lone women IN THEIR homes to r*pe. Please forgods sakes stop blaming women. The fault is completely and entirely with the predators NOT the victim. https://t.co/3KMpO8hhPi

Frieha Altaf highlighted that a large percent of the victims are children, many of them are boys.

Shame on You IK A child is raped by a cleric 3 days ago!
Over 47%of children raped are boys!
Zainab & 8 girls were not out tempting the serial rapist! Nor was a mother of 2 stuck on motorway! stop victim blaming!
Stop promoting false rape culture #AxiosOnHBO #ourpm @Sahil_NGO pic.twitter.com/OMYZRKjF2m

Singer Meesha Shafi asked how, according to the PM’s logic, a child’s clothing leads to rape.

Saheefa Jabbar Khattak took to her Instagram stories to ask the PM how he could make such statements when innocent little girls who have been victims of sexual violence are awaiting justice. 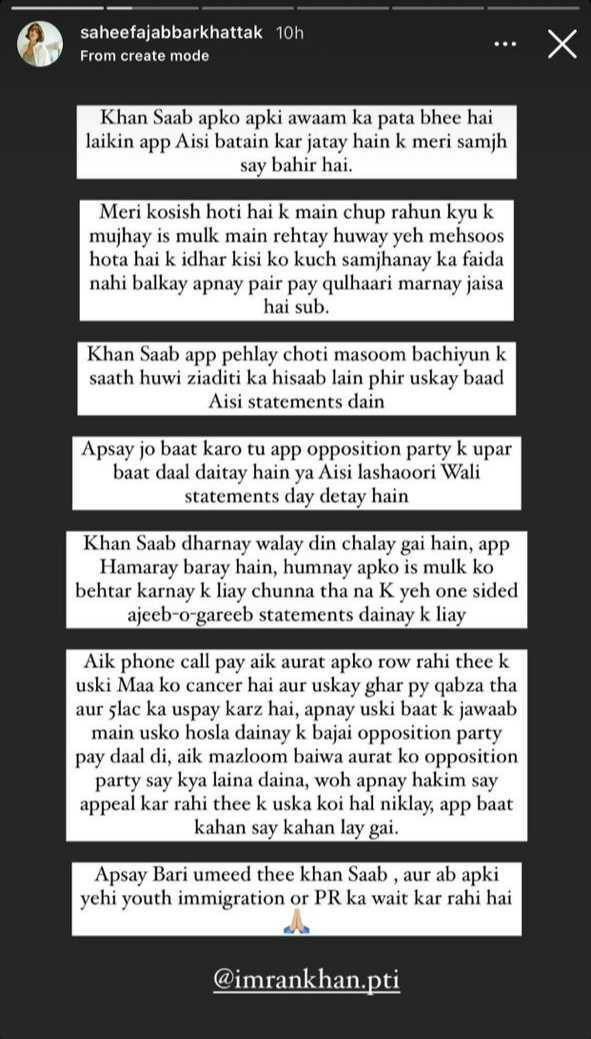 The premier had said during an interview on HBO, “If a woman is wearing very few clothes, it will have an impact on the men, unless they’re robots. I mean it is common sense.” When asked by the interviewer about how such an act can provoke acts of sexual violence, the PM answered, “It depends on which society you live in." He further added, “If in a society people haven’t seen that sort of thing, it will have an impact [on them]. Growing up in a society like yours, maybe it won’t impact you. This cultural imperialism… Whatever is in our culture must be acceptable to everyone else."

and this is an educated class hahahaha....... right so here is what you cannot understand ever ... you wearing sexy clothes make you feel good women as men are looking at you and you get attraction however not all of them can have you or lets say you do not want them to have you not all of them right hence what you have done is created frustration in your drivers head in your watchman s head in all those men in the market or shop workers shop owners even hotel staff they want to have you they cannot... so what they do is they take it out on someone else someone they can force they can DOMINATE ... hence rape hence forced sex even onto their partners