India slams Twitter for not complying with new IT rules

Irked over Karachi's administrative affairs, Chief Justice of Pakistan (CJP) Gulzar Ahmed observed on Wednesday that the city has been ruined through a "conspiracy".

The CJP’s remarks came during a hearing of a case related to the computerisation of provincial land records being held at the Supreme Court's Karachi Registry.

Bench member Justice Ijaz-ul-Ahsan told the Sindh Board of Revenue official that the authority had been asking for two months, but years had passed without any progress.

“Why has the record not been computerised since 2007?,” the justice asked. To this, the revenue board member replied that all records had been compiled except for Thatta district's.

Expressing anger at the official, CJP Gulzar stated that it was strange that Thatta's record had not been compiled for three years.

The chief justice expressed displeasure over "thousands of land disputes", adding that land grabbing was also happening for the same reason.

“What is NA-Class?,” the CJP further asked. “This system is still ongoing in this century; billions of rupees are being made in its name in Karachi. When will Karachi's survey be held? The Board of Revenue is the most corrupt institution. Land grabbing is also taking place due to its members,” the CJP maintained.

“Visit the University Road and see how many buildings have been constructed. A wall is torn down for show, and is built back again the next day,” he said.

The court directed the provincial BoR to computerise all records within three months, clear government lands and establish parks on them.

The apex court also heard the issue of the computerisation of land records in Khyber-Pakhtunkhwa.

A KP government representative submitted a reply stating that all records would be computerised by June 2022. The top court also directed to complete the land settlement of Balochistan as soon as possible.

The chief justice said that nothing had happened in Pakistan regarding land records till date. He said the issue has existed ever since Pakistan's formation.

Speaking of the Karachi Metropolitan Corporation (KMC's), CJP Ahmed said all people responsible for the city's woes would be caught.

The chief justice further rained on the administrative authority, terming it responsible for the mismanagement in the city. "No KMC employee has ever been seen working. The KMC is a hollow authority," the CJP stated.

"Lay off 80% of KMC's staff; it does not need so many. The KDA [Karachi Development Authority], KMC were overstaffed by a 1000%,” the chief justice added.

He said these institutions that were once considered Karachi's valuable assets have been destroyed, adding that Karachi has been ruined.

“The Lines Area was sold by your [KMC] officers. Today, North Nazimabad is worse than a slum. The areas are muddied, gutters are full and roads are broken. There is a big conspiracy against it," the CJP said.

The top court rejected the federal government's request to stay demolitions along the Gujjar and Orangi stormwater drains for a week, till a rehabilitation plan was drawn up.

Denying the request, the SC however sought alternative plans on the nullahs and asked the Sindh government about the resettlement plan for the affectees. 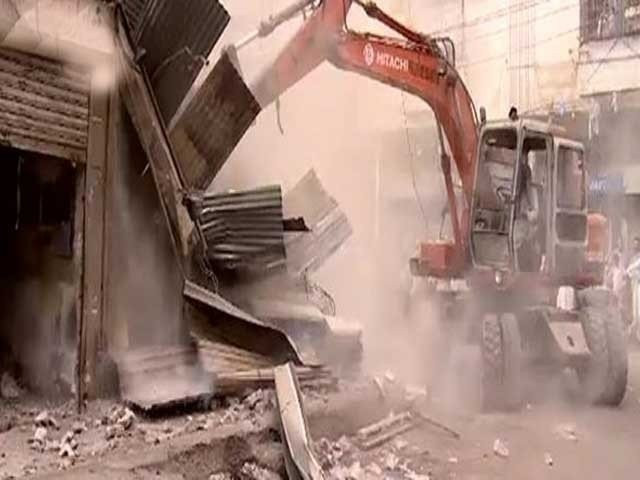 KMC administrator informed the CJP that work had started against encroachments around the Aladdin amusement park and Pavilion End Club. He said that more time was required to complete the drive as there were excessive encroachments in the area.

The attorney general prayed that the the Gujjar Nullah operation would create a major humanitarian disaster.

“I am ready to consult the Sindh chief ninister and NDMA chairman," the AGP stated.

However, the apex court refused stopping the anti-encroachment drive and directed for it to be continued.

‘Traffic snarls due to encroachments’

Mughal-era mosque to be cleared of encroachment