A security guard opened fire on the set of a television serial at a bungalow in Defence Housing Authority (DHA) Khayaban-e-Shujaat yesterday. At least nine people were injured and taken to the Jinnah Postgraduate Medical Centre (JPMC). The guard, identified as Gul Bai, was arrested immediately.

Turns out, a quarrel between this guard and the production crew of the shoot had escalated, South SSP Zubair Nazeer told The Express Tribune. The crew members were having lunch on a porch in the parking area of the house, which had been rented out by a private production company. The security guard told them that the owner of the bungalow has restricted people from eating in the parking area and asked them to move, Nazeer informed.

But the crew members ignored Gul and this enraged him, following which, he fired shots at the ground and the bullets ricocheted, hitting crew members. Health officials have said that at least one of the crew members was hit by a bullet shell while the nature of the other crew members’ injuries was not immediately shared.

Now, actors Ushna Shah and Yasir Hussain are condemning the reckless and inhumane behaviour of the guard. The latter has also highlighted the discrimination on sets and called out the production house. Taking to Twitter, Shah wrote, “Crew members (who were shot at) are the first to arrive and the last to leave any set. They work tirelessly in the scorching heat and receive minimum wage. These are young boys trying to make a living. This was a deplorable incident and justice must be served!”

Crew members (who were shot at) are the first to arrive and the last to leave any set. They work tirelessly in scorching heat & receive minimum wage. These are young boys trying to make a living. This was a deplorable incident and justice must be served!

While Hussain noted on his Insta Story, “The guard didn’t opened fire at the actors or producers, but ended up shooting the labour force that works on daily wages.” Voicing their plight, the actor went on to explain how this “labour force has to sit outside the house in a parking lot to eat because it does not get to sit in air conditioned rooms. So if the guard is being punished, then the production house and the system must be held accountable too!” 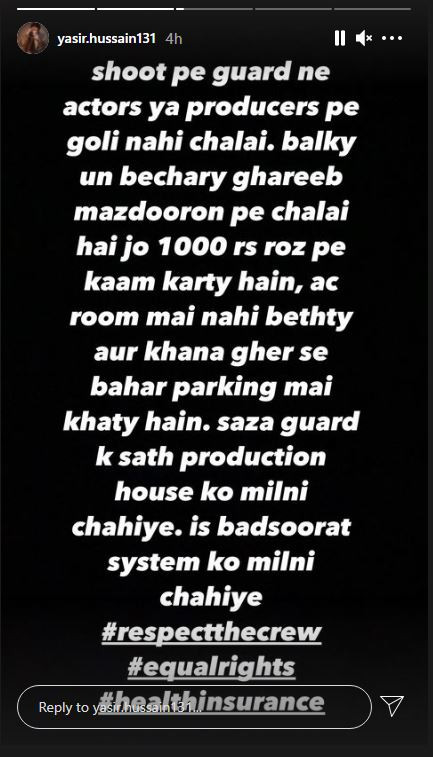 The injured crew members were identified as Muhammad Owais, 22, Muhammad Shehzad, 24, Akbar, 25, Zahid Ali, 27, Qamber Ali, 31, Farhan Alam, 34, Muhammad Yousuf, 37, and Shehzad, 37. And an FIR was lodged at the Clifton Police Station on the complaint of the production company’s technical director.

SBP jacks up interest rate to 15%