Kashmiris and Pakistanis in the United Kingdom staged protests, held digital campaigns and other events in various cities across the UK from London to Glasgow in connection with Kashmir Martyrs' Day on the call of the Tehreek-e-Kashmir (TeK).

During Friday sermons in mosques, religious scholars strongly condemned the killing of 70 unarmed Kashmiris by the Indian army on May 21, 1990.

TeK UK launched a digital campaign to highlight the suffering of the people of Indian Illegally Occupied Jammu and Kashmir (IIOJK). The digital campaign was launched from outside Indian High Commission London and the demonstrators raised slogans including "stop India’s demographic terrorism in Indian Occupied Kashmir, end Indian colonisation of Kashmir, India criminalises press freedom in Kashmir; hold India accountable for war crimes in Kashmir; and release all political prisoners.”

India at the same time launched a counter-digital van in London to fool the world and divert the world's attention from the atrocities of Indian forces on innocent Kashmiris. 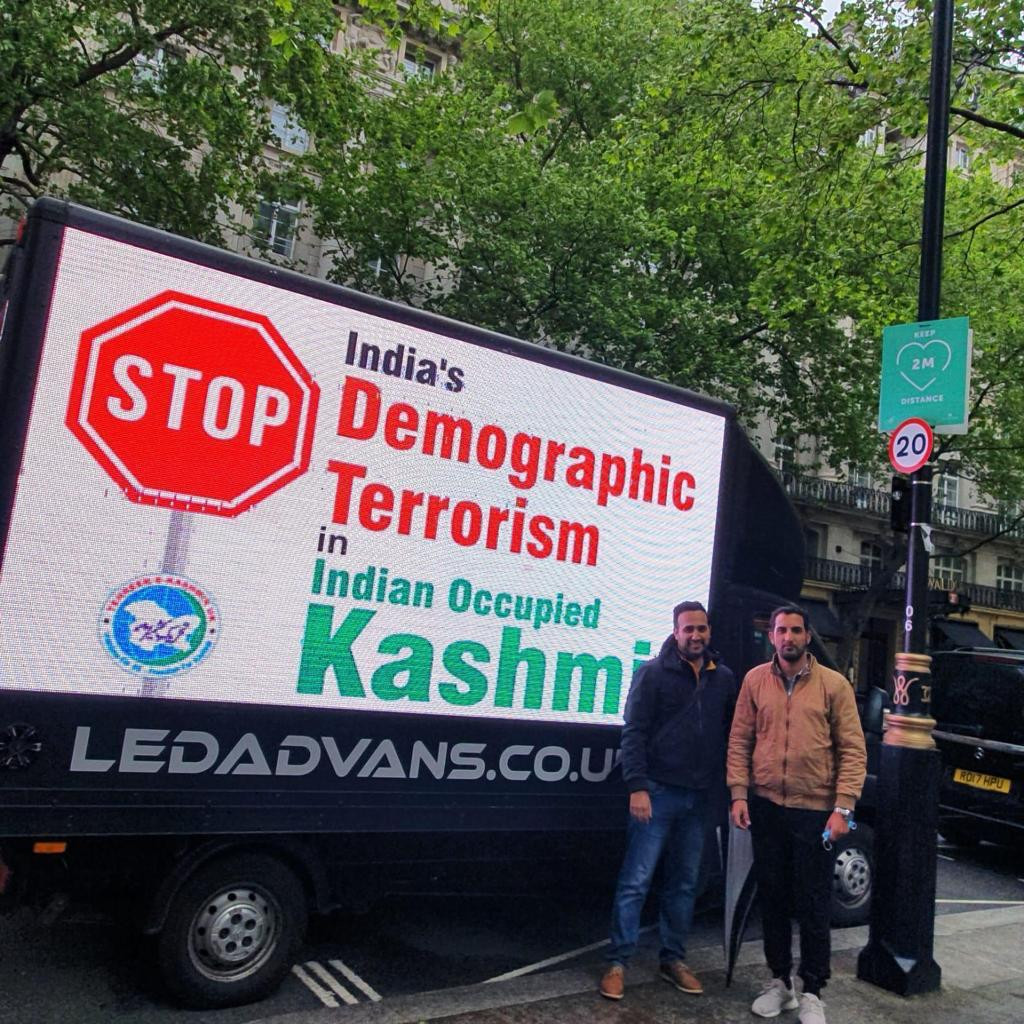 Fahim Kayani, President TeK UK, said the digital van, public mobilisation in the shape of protests, seminars and rallies is very important to keep the Kashmir cause for the right to self-determination alive. “It is to expose the true face of the brutal Indian regime in front of the world,” he added.

“India’s false narrative on Kashmir has been rejected by the international community,” said Kayani, adding that public opinion was moulding in favour of Kashmiris as dozens of articles have been written against the BJP-RSS regime led by Modi, who he said is attempting to change the demography of Kashmir and also committing unabated human rights violations through his ruthless Indian army.

Kayani added that the Indian army has got impunity under the so-called Armed Forces Special Powers Act which gives "kill and catch" licence to the Indian army “that is why not a single Indian army personnel has been tried despite committing massacres such as the Hawal massacre where 70 innocent Kashmiris, including four women were killed by indiscriminate firing by the Indian army.”

AFSPA is a black and extra-judicial law, he noted.

“The international community, especially the UN, the OIC and the ICJ must hold India for its war crimes in Kashmir,” he said. Without resolving the dispute, peace in South Asia cannot be achieved, he added.

Tehreek-e-Kashmir led protests and conferences were held in Reading, Bolton, Glasgow, Bradford, Birmingham, Oldham, Nelson and London among other cities in the United Kingdom.

While addressing the protesters outside the Indian Consulate Birmingham, Muhammad Ghalib, President of TeK Europe, Maulana Fazal Ahmed Qadri, Patron in Chief of All Parties International Kashmir Coordination Committee and Khawaja Muhammad Suleman, Director of Kashmir Information and Research Centre Birmingham said that the sacrifices of Kashmiris will be not be forgotten and “we will continue to raise our voices against illegal Indian occupation of Kashmir.”

The four-member Stop the War (STW) delegation, led by General Secretary Stuart Richardson, participated in the protest outside the Indian consulate and expressed his solidarity with the people of IIOJK.

Stuart condemned the atrocities committed by the Indian army against innocent Kashmiris.

While addressing the protesters in Glasgow, Syed Tufail Hussain Shah, Patron-in-chief of TeK UK said: “Indian fascist regime is a threat not only to the existence of Kashmir but the whole world.”

Hafiz Muhammad Azad, Secretary General of TeK UK, expressed his concern during Friday sermon, saying “India and Israel are sinners in arms which use same policies in subjugating and oppressing the voices which seek complete end to their occupation”.

Yaseen Badar, Assistant Secretary General TeK Birmingham, Mujahid Hussain, President TeK Sparkbrook, Muhammad Munir Vice President TeK Birmingham said that that the sacrifices given by the people of Jammu and Kashmir “will not go in vain and one day Kashmir will be free.”