The veteran politician was suffering from diabetes and heart ailments.

She had been elected to the provincial assembly three times in the past. 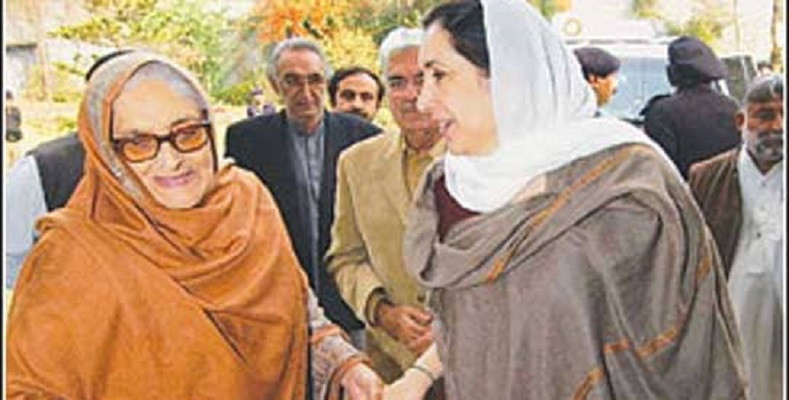 Begum Naseem’s funeral prayers will be offered at 6pm (today) at Wali Bagh, Charsadda, according to a statement issued by ANP spokesperson.

Following her demise, the ANP announced three days of mourning in the province.

“The party's political activities across the province will be suspended and the party's flag will be flown at half mast,” said the incumbent ANP provincial president Aimal Wali Khan.

“Begum Naseem Wali Khan was another name for the politics of resistance,” he maintained.

The ANP president added that Begum Naseem’s role in women's participation in politics is a shining chapter in history.

“The difficult circumstances in which she ran the party are unprecedented,” he said, adding that, “The void created by her death in the country’s politics will hardly be filled.”

Condolences started to pour in following the death of the party stalwart.

Among them was Afghan President Ashraf Ghani who expressed grief over the death of the former ANP provincial president.

“Heartfelt sympathy and condolences to the family of the deceased,” Alvi said, adding “The political services of the late will be remembered.”

Praying for the departed soul, the president said, “May Allah forgive her and grant patience to her family.”

“May Allah Almighty bless the departed soul in eternal peace and give solace to the bereaved family, Ameen,” COAS prayed.

Khyber Pakhtunkhwa (K-P) Chief Minister Mahmood Khan also expressed sorrow over the death of the late ANP leader. The CM further extended his condolences and sympathy to the family.

“May Allah forgive her and give the bereaved the strength to bear this trauma,” the provincial chief minister said.

"Saddened by the news of Begum Nasim Wali Khan's death," stated the leader of the opposition.

"Her services for empowerment of women will be remembered for a long time," Sharif added.

Saddened by the news of Begum Nasim Wali Khan's death. She took an active part in politics & was the first woman to get elected on a general seat from KP. Her services for empowerment of women will be remembered for a long time. My heartfelt condolences to the bereaved family!

Qaiser prayed for Begum Naseem's soul to attain a high rank in paradise and patience for her family.

The Pakistan Peoples Party (PPP) co-chairperson remembered Begum Naseem as a brave politician and lauded her role in the 1983 Movement for the Restoration of Democracy or the MRD Movement.

Zardari further extended his condolences to the family and paryed for the departed soul.

Actor Sumbul Shahid passes away due to Covid-19