Broadway to light up again in September

Say ballot counterfoil also not checked; no precedent of recount without counting of empty ballots

All parties, except the Pakistan Peoples Party (PPP), and independent candidates seeking recounting in the NA-249 constituency boycotted the process on Wednesday over non-provision of Form 46 and counterfoil of ballot papers not being checked.

In a letter addressed to the returning officer (RO), the parties maintained that, "For want of non-provision of Form 46 and denial to allow access to the counterfoil of ballot paper, we cannot participate in [the] subject proceedings."

The parties pointed out in the letter that, "...the first bag [of ballot papers] lying on [the] table was without a seal," adding that all parties were boycotting the recount "under this attitude".

The aggrieved parties maintained that there was no precedent of recounting being conducted without the empty ballots being counted, or Form 46 and counterfoil signatures or seals not being checked.

Read NA-249 recount to open door for scrutiny of many seats: Bilawal

According to PML-N's Miftah Ismail, "All ballot bags were unsealed when [they] reached [the] RO office." He also alleged that 167 forms did not have signatures of the presiding officers.

According to PTI's Amjad Iqbal Afridi, the by-poll had been "planned". He said they were not being provided with Form 46, adding that the party will not let the PPP influence results. "There should be a re-poll in the constituency," he maintained.

PSP's Hafeezuddin accused the ROs of siding with those who rigged the polls.

The ECP reportedly contacted the boycotting lawmakers, but they refused to be a part of the process.

Meanwhile, PPP's winning candidate Qadir Khan Mandokhel said that "defeat is in PML-N's fate, regardless of what they do."

He admitted that the recount was delayed by two hours, but added that the representatives of political parties, except for two of them, were present during the process.

"Why is Form 46 an issue when there's a recount ongoing?" he asked. "It will be generated afresh."

Provincial information minister Nasir Shah said that PPP's victory is not being accepted. Terming the boycott of the recount a "drama", Shah said it is an attempt to pressurise and coerce ECP.

Senior PPP leader Shehla Raza said that PML-N "escaped the recount because it was fearful of its  imminent defeat."

She asked the party to accept the results. "It is as if the PML-N wants the electoral record to set up its own election cell."

Raza further said, "first, they rejected the results and now, they are making the recount controversial."

However, despite the boycott, the recounting that commenced at the RO office today continued.

According to the returning officer, it would be difficult to complete the process of counting 73,471 votes cast in 276 polling stations of the constituency in a single-day.

“Each and every vote will be re-checked in the presence of all candidates of different political parties and their chief polling agents. We will try to finish the task in a day, but I believe it will take more time,” said a senior ECP official.

The PML-N maintains that their mandate was "stolen" in the election, saying it had been leading the polls since the voting started.

The PPP bagged victory in the NA-249 Karachi by-election held on April 29, defeating the PML-N contender by 683 votes. 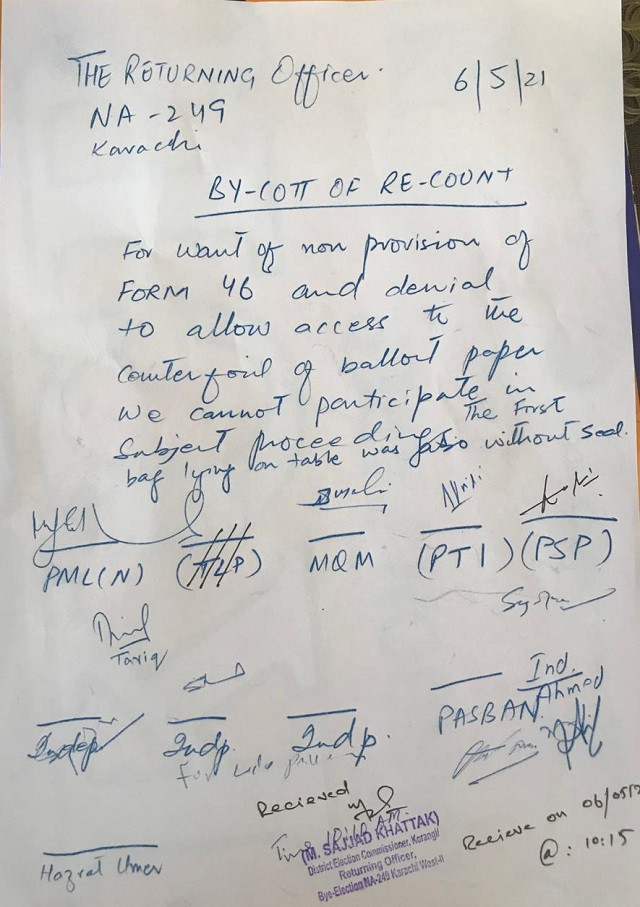 A copy of the signed document available with The Express Tribune

NA-249 recount to open door for scrutiny of many seats: Bilawal

All eyes on NA-249 as recount begins