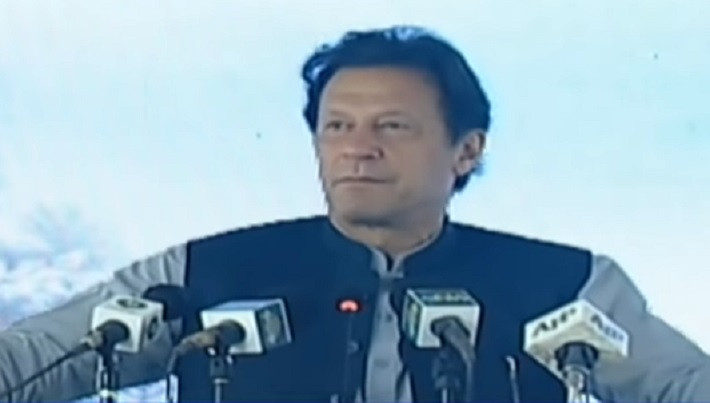 Prime Minister Imran Khan said on Wednesday “elite capture” was responsible for economic divide in the Pakistani society and stressed the need for an equitable model which ensured development of all segments of society.

Addressing the ground-breaking ceremony of three roads being constructed by the National Highway Authority (NHA), Imran said the government was focused on bringing prosperity to Balochistan through infrastructure and human development projects.

Imran regretted that serious steps had not been taken in the past, otherwise the country would have witnessed immense development. “Balochistan suffered apathy of previous rulers, who had the mind-set of ignoring the province,” he said.

Imran said that a small segment of society was occupying the resources of the country. “Our past rulers bought properties in the posh areas of London, where even the British Prime Minister could not afford to buy property,” he said.

“However, my ideology is about making Pakistan rise, by uplifting its weaker segments,” he said. “This was the model of development in the state of Madina that they did not build palaces, Pakistan will develop when the lower class will come up,” he added.

He also said that China's development and its strategy to bring people out of poverty was exemplary and stressed that Pakistan could learn from that model also. “The government will take every step to minimise the problems of the people despite financial constraints.”

“Compared with the 1,100 kilometres roads constructed by previous governments in the past 15 years, the present government has completed 3,300 km long roads in two-and-a-half years,” the prime minister told the ground-breaking ceremony.

He said the project of direct subsidy to farmers on seeds and fertiliser under the Kisan Card had been launched while 80% data of deserving families had been registered for the Ehsaas socio-welfare programme.Kamyab Jawan

Addressing at the ceremony of soft-loan distribution among youth of Balochistan under the Kamyab Jawan Programme, Prime Minister Imran said that the coastal areas of Balochsitan offered immense potential in the fisheries sector and asked the local youth to fully tap these opportunities.

Imran said the government would support the youth through proper training in fisheries and help them run their own businesses. He expressed satisfaction with the allocation of Rs10 billion for the small business and skill development of the people of Balochistan.

He pointed out that big cartels in the fisheries sector were an impediment to removing poverty from among the fishermen. “The promotion of fisheries sector would help in the progress of the youth of Balochistan and ultimately benefit Pakistan,” he said.

On the occasion, Pakistan Tehreek-e-Insaf (PTI) leader Muhammad Usman Dar, who is leading the Kamyab Jawan Programme, said that loans worth Rs8 billion had been disbursed among 10,000 youth, which helped create around 70,000 employment opportunities.

Dar said that in line with the directions of the prime minister, at least Rs5 billion would be distributed among the youth of Balochistan by the year-end in order to support them to set up their own businesses.

Earlier, the prime minister gave away cheques of soft loans to the successful candidates of Youth Entrepreneurship Scheme (YES) from Balochistan.

The programme was launched in October 2019 under the banner of Kamyab Jawan Programme to provide soft loans to the youth for initiation of their own businesses. Recently, the government has enhanced the scope of YES, which was meant to offer huge amount of concessionary loans, ranging between Rs100,000 and Rs25 million. The earlier limit was Rs5 million only.

According to the State Bank of Pakistan (SBP), the financing under YES has been segregated into three tiers. Under tier-1, the loan amount ranged between Rs100,000 and Rs1 million, tier-2’s loan range is Rs1 million to Rs10 million and tier-3’s range is Rs10 million to Rs25 million. For tier-1 loans the mark-up rate is 3%, for tier-2 loans it is 4%, and for tier-3, the rate is 5%.

Meanwhile, presiding over a meeting held here regarding the overall situation in Balochistan and development matters, Prime Minister Imran said that the federal government was taking all-out measures for the progress and prosperity of the people of Balochistan on a priority basis.

The Balochistan chief secretary briefed the prime minister about the coronavirus situation in the province, precautions and the measures being taken to tackle the pandemic. The meeting was also briefed about the availability of essential items at affordable prices in the holy month of Ramazan.

The meeting was informed about the provision of funds for the completion of development projects in the province at federal and provincial levels, utilisation of energy resources, especially the renewable energy and the recommendations for agricultural development.

The prime minister was briefed about the setting up of border markets along the Pakistan-Iran border area and the various recommendations for benefiting from the opportunities of socio-economic development.

The meeting was also briefed about overall law and order situation in the province and the capacity building of the police and the Counter Terrorism Department (CTD).

The prime minister appreciated the proposals regarding the law and order and economic development of Balochistan and directed the relevant federal institutions to finalise the recommendations and proposals of the provincial government.