During a meeting with Foreign Minister Shah Mahmood Qureshi, who is visiting the neighbouring country, Rouhani stressed that security was a common concern of Iran and Pakistan, underlining the need for both countries to cooperate in this regard.

Referring to the US decision to withdraw forces from Afghanistan, he said that the US military presence would not help the security and stability in the region and rather Iran and Pakistan, as the main neighbours of Afghanistan, have to play their role to guide the peace process in the country.

According to the Pakistan Foreign Office, Qureshi conveyed warm greetings on behalf of Pakistani leadership to Dr Rouhani and best wishes for the fraternal Iranian people. Qureshi lauded President Rouhani’s role in leading the nation during his tenure.

During the meeting, the two sides discussed the ways to strengthen close bilateral relations. He underlined Prime Minister Imran Khan’s vision to strengthen ties with Iran in diverse field with emphasis on expanding mutually beneficial economic cooperation and development.

Qureshi thanked Rouhani for support to the Prime Minister’s initiative to establish border markets, which would benefit people in the border region. The opening of international border crossing point at Mand-Pishin would facilitate pedestrian movement and enhance bilateral trade, he said.

“While discussing rising Islamophobia, Foreign Minister Qureshi appreciated convergence between Pakistan and Iran to show a common resolve against xenophobia, intolerance and incitement to violence on the basis of religion or belief,” the Foreign Office said in a statement.

Qureshi also called on Iranian Parliament Speaker Muhammad Bagher Qalibaf and highlighted the rise of Islamophobic incidents, which imperilled the future prospects of peace and harmony among civilisations.

During the meeting, the Qureshi appreciated Iran’s support to Pakistan’s initiative to counter Islamophobia. It was agreed to move jointly on the issue of Islamophobia and preserving the respect of the Holy Prophet (Peace Be Upon Him), Foreign Office said a separate statement.

Earlier, Pakistan-Iran Friendship Group Chairman Ahmad Amirabadi Farahani received the foreign minister upon his arrival at the parliament. On the occasion, Farahani emphasised the need for mobilising the parliamentary friendship groups of the two countries.

Also on Wednesday, Qureshi visited the Pakistan embassy in Tehran. Addressing the embassy officials, Qureshi said that Pakistan had vociferously expressed its serious concerns over the increasing trend of Islamophobia in the West which was being fanned by certain extremist elements. 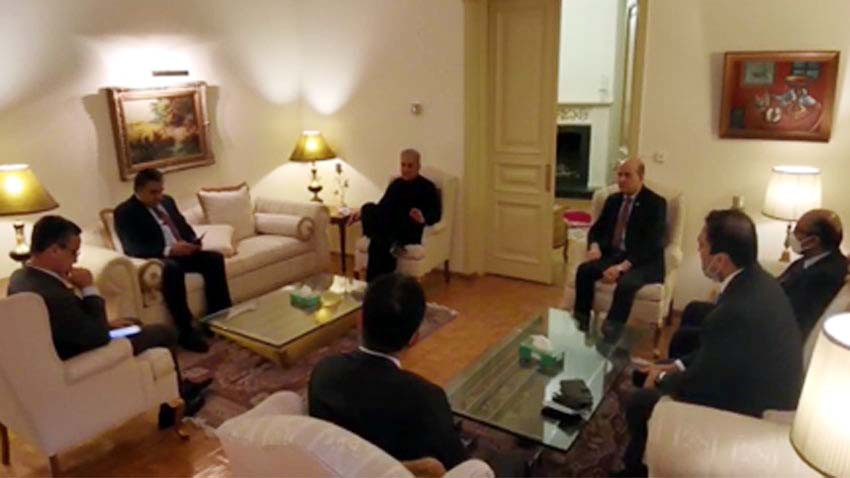 The foreign minister stressed that the right to freedom of speech and expression did not give anyone the right to hurt others’ feelings. In the past, he said, certain incidents regarding publication of blasphemous sketches and statements occurred which hurt the sentiments of the Muslim Ummah.

“Pakistan is established in the name of Islam. Prime Minister Imran Khan has effectively raised voice against Islamophobia at the UN General Assembly,” he said. He added that he had suggested for formation of a joint strategy by the Ulema of Pakistan and Iran to confront such incidents.

“Everyone is aware of the importance of Saudi Arabia for the Muslim Ummah. During an upcoming visit of prime minister, the leadership of the both countries would discuss this issue,” Qureshsi said, stressing the need for raising the issue collectively at the international fora.

During the visit to various sections of the embassy, Qureshi directed the diplomats for making serious efforts to boost bilateral economic cooperation and the volume of trade between Pakistan and Iran.

On the occasion, Pakistan’s Ambassador Rahim Hayat Qureshi briefed the foreign minister about the performance of embassy as well as the facilities being provided by it, including the issuance of passport and visa.

Always a pleasure to be in #Iran and i am pleased to share some good news for our citrus farmers. Following discussions, happy to announce that Iran has lifted
restrictions on the import of Pakistan’s kinnow. #EconomicDiplomacy

'MQM-P standing by industrialists and traders'