A patient with a breathing problem is helped by his relative to enter a COVID-19 hospital for treatment, amidst the spread of the coronavirus disease (COVID-19), in Ahmedabad, India, April 19, 2021. REUTERS

Indian authorities scrambled to shore up supplies of medical oxygen to hospitals in the capital, Delhi, on Wednesday as a fast-spreading second wave of coronavirus stretched medical infrastructure to breaking point, officials and doctors said.

India, the world’s second most populous country, is reporting the world’s highest number of new daily cases and approaching a peak of about 297,000 cases in one day that the United States hit in January.

Delhi’s government issued a call for help on social media saying major government hospitals only had enough oxygen to last another eight to 24 hours while some private ones had enough for just four or five hours. 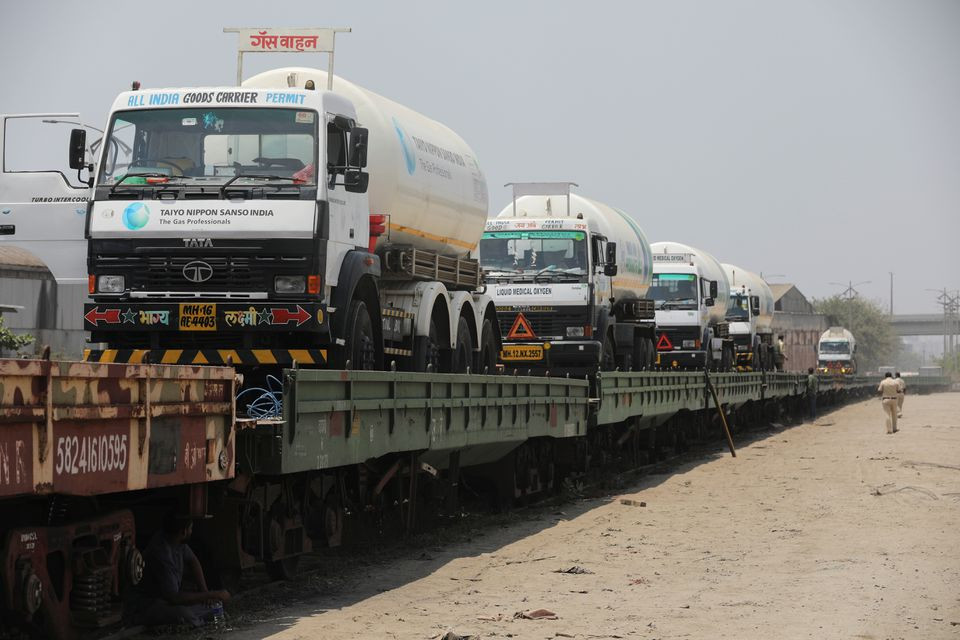 Empty cryogenic tankers are seen onboard the bogie open military new (BOMN) wagon before being transported to a Liquid Medical Oxygen (LMO) plant from another state for refilling with liquid oxygen, amidst the spread of the coronavirus disease (COVID-19), on the outskirts of Mumbai, India, April 19, 2021. REUTERS

One hospital, the GTB hospital, got some oxygen supplies just before it was going to run out of stocks for its 500 patients, media reported.

Read US warns against India travel as coronavirus cases surge

“We had almost lost hope. All of us were in tears when we saw the oxygen tanker arrive,” one relieved doctor, speaking on condition of anonymity, told India Today.

The city of 20 million recorded 28,395 new cases and 277 deaths on Tuesday, its highest since the pandemic began. Every third person tested for coronavirus was found positive, the state government said.

“Oxygen demand has increased. We are working with speed and sensitivity to ensure oxygen to all those who need it. The centre, states and private companies, all are working together,” Modi said in a televised address to the country on Tuesday evening.

Modi faces criticism that his administration lowered its guard when coronavirus infections fell to a multi-month low in February and allowed religious festivals and political rallies, some of which he addressed to go ahead.

“The situation was manageable until a few weeks ago. The second wave of infections has come like a storm,” Modi said in his address, urging citizens to stay indoors and not panic amid India’s worst health emergency in memory.

India has launched a vaccination campaign but only a tiny fraction of its population has received shots.

Delhi is under a six-day lockdown to try and stem the transmission. The western state of Maharashtra, home to the financial capital Mumbai, also plans to impose a stringent lockdown this week to try to halt the rise in cases, the cabinet said.

Modi ordered a tough lockdown of India’s 1.3 billion people when the coronavirus was detected last year but his government has always been wary of the huge economic costs of tough restrictions.

He said on Tuesday a lockdown should only be a last resort.