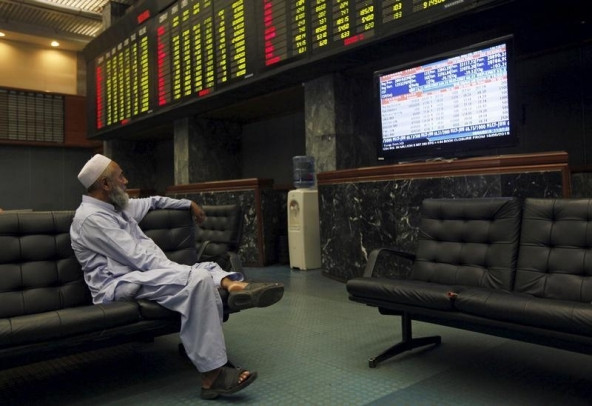 Foreign institutional investors were net buyers of Rs37.6 million worth of shares during the trading session. PHOTO: REUTERS
KARACHI:

The Pakistan Stock Exchange began the week on a negative note on Monday, with the benchmark KSE-100 index diving nearly 700 points during the session as the market reacted to repercussions of a strike call.

Gathering clouds on the political and security fronts spooked investors and they began offloading stocks following the decision taken by traders across the country to keep markets shut after former chairman of the Ruet-e-Hilal Committee, Mufti Muneebur Rehman, late on Sunday called for a nationwide strike.

In the backdrop of rising coronavirus cases coupled with growing tensions over the law and order situation in the country, the KSE-100 index fell below the 45,000-point mark.

In the morning, the market kicked off trading with a dip and continued to spiral downwards throughout the day. Although mid-session buying helped the benchmark index recoup some of the losses, it still finished deep in the red.

Arif Habib Limited, in its report, stated that following the turmoil over the weekend on the law and order front, the KSE-100 index dropped 694 points during the session. However, it recovered about 300 points afterwards.

Among fertiliser stocks, Engro Fertilisers announced its financial results with a healthy dividend payout, which helped the stock perform better.

JS Global analyst Muhammad Mubashir said that the KSE-100 index came under pressure at the opening of trading amid political noise over the weekend.

Heavy selling pressure was noted in the technology sector. Separately, Byco Petroleum was in the limelight on news that it had begun work on producing compliant fuels (Euro 5 and 6) and would convert furnace oil into petrol and diesel by 2024.

“We expect the market to remain volatile on the back of political uncertainty and recommend investors to book profits on the higher side and wait for any sharp dips to accumulate value stocks, mainly in cement and steel sectors,” the analyst said.

Overall trading volumes rose to 363.1 million shares compared with Friday’s tally of 173.5 million. The value of shares traded during the day was Rs12.7 billion.

Shares of 379 companies were traded. At the end of the day, 109 stocks closed higher, 255 declined and 15 remained unchanged.

Foreign institutional investors were net buyers of Rs37.6 million worth of shares during the trading session, according to data compiled by the National Clearing Company of Pakistan.