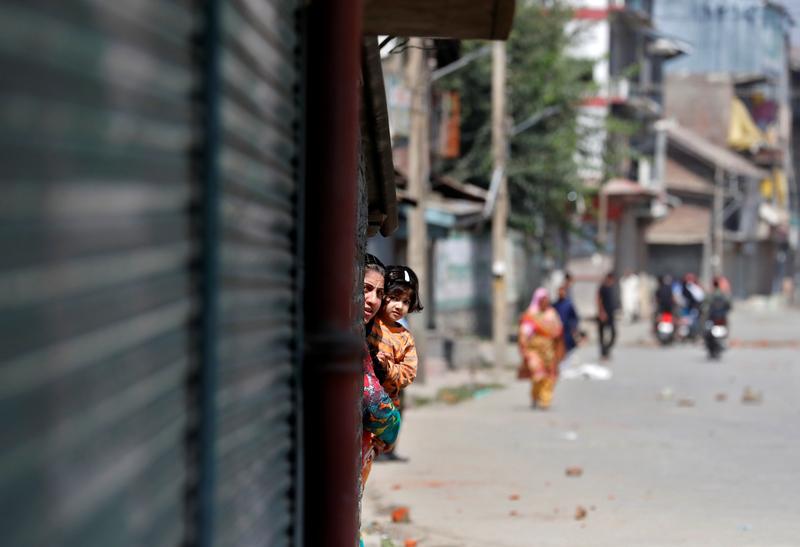 A Kashmiri woman holds a girl as they watch a protest after a gun battle between freedom fighters and Indian security forces in Srinagar September 17, 2020. PHOTO: REUTERS/FILE
MIRPUR:

Azad Jammu and Kashmir (AJK) President Sardar Masood Khan Saturday demanded immediate unconditional release of Kashmiri leaders, including thousands of political activists languishing in various prisons of India and Indian Illegally Occupied Jammu and Kashmir (IIOJK). Mirwaiz Umar Farooq, Yasin Malik, Shabbir Ahmad Shah and Asiya Andrabi are among the Kashmiri leaders languishing in prisons. “The innocent detainees should be released during the holy month of Ramazan and before the Eidul Fitr,” said the AJK president in a statement.

He urged that the Kashmiri leaders should be freed so that they could celebrate the festival with their families and relatives. The AJK president said that it was a matter of grave concern for the leadership that after abolishing Kashmir's special status on August 5, 2019, thousands of innocent Kashmiris were detained and they had not been released even after two years.

“The majority of arrested people were youths who have been imprisoned simply because the Indian government feared they would rise up against its illegal actions and will oppose their anti-Kashmir measures,” read the statement issued by the AJK president. Khan further added that military officers and personnel mistreat women, elders and children during the infamous military operations in the name of house-to-house searches in Occupied Kashmir “The young people are killed, wounded or arrested and put in prisons and concentration camps where they are subjected to the worst inhumane treatment so that they would give up their support for the freedom and right to self-determination movement and mentally accept Indian slavery,” he added.

He said people of IIOJK were not ready to compromise on their right to freedom or show any weakness despite cruelty, oppression and inhumane treatment by India. The president appealed to people of Jammu and Kashmir to unite for snatching the right of freedom from their common enemy India and turn their differences towards India instead of targeting each other.