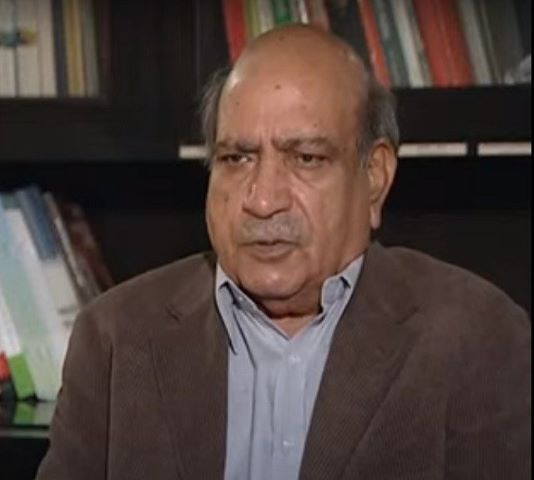 In what can be best described as a poignant and befitting eulogy to a man who was an icon of human rights, speakers at a condolence reference paid glowing tributes to Human Rights Activist I. A. Rahman who passed away recently.

The reference was organised virtually by Devcom Pakistan in which Devcom Executive Director Munir Ahmed suggested that they should have tangible memorials in all provinces and human rights study centres at different universities in the name of I. A. Rahman.

"His services are milestones for rights defenders which should be compiled and published in book form," he urged.

The panel of constitutional experts and human rights practitioners urged the government to prioritise tabling a bill against torture that has long been pending after the country had signed and ratified the UN Convention against Torture in 2008. They said the present government promise is yet to see the light.

Speakers also voiced their sentiments about Rahman who was acclaimed internationally as well as nationally for his life long achievements and the tireless struggle for human rights in the country.

Describing Rahman as a rights defender, peace guru and a seasoned journalist., they stressed that the journey of human rights should continue in the light of I. A. Rahman’s thoughts, visions and writings.

I.A. Rahman was a paragon of virtue who advocated peace in the region through bilateral and multilateral advocacy and diplomacy based on human rights, they maintained. He was a firm believer in friendship between the people of Pakistan and India, in particular, to propagate peaceful diplomatic relations between the governments of both countries.

Farhatullah Babar asked the human rights committees of the National Assembly and the Senate to have a joint session in memory of I. A. Rahman where they shall recommend to the government for conferring upon him the highest national award Nishan-e-Pakistan.

He also suggested the human rights organisations to form an alliance and take note of the deteriorating situation of human rights in Pakistan and the region. He said that a couple of universities should have human rights chairs named after Rahman

"I. A. Rahman was a person who genuinely shared his wisdom with everyone, wrote a lot about every aspect of human rights and democracy, and intentionally kept away from the rulers to maintain his integrity and intent," Babar said. "He was an inspiration to all those who knew him."

"He continued to inspire generations for six decades. To continue the journey of his vision and wisdom, it is very essential to have his articles compiled in a book form, and another book shall be written on his efforts and lifelong struggle to inspire the next generation."

Zafarullah Khan said I. A. Rahman had started writing on human rights much earlier than the popular rights movement in Pakistan. "He was the initial voice against the non-democratic forces and dictatorial regimes. His writings unfolded the conspiracies against peace in the region that was deliberately disturbed for the vested interests of the non-democratic forces. He believed that people-to-people contact would wipe off ethnic, religious and regional hatred."

Dr Khushboo Ejaz described Rahman as a mentor, outspoken rights defender and blunt writer and journalist. "Some universities shall have centres of excellence on human rights and peace named after I. A. Rahman."

Sadia Bokhari reminisced that Rahman played a mentor to her in her days as a young journalist and groomed her for human rights when she joined the Human Rights Commission of Pakistan (HRCP). "He was a polite, steadfast and simple person with clarity of vision and objectives for his career and life."

Professional excellence, love for humanity and peace were the goals that he achieved with all passion and dedication, she added.

Zulqairnain Asghar mentioned that Rahman was the first person who highlighted the rights of persons with disability and consistently wrote and propagated the challenges confronting them.