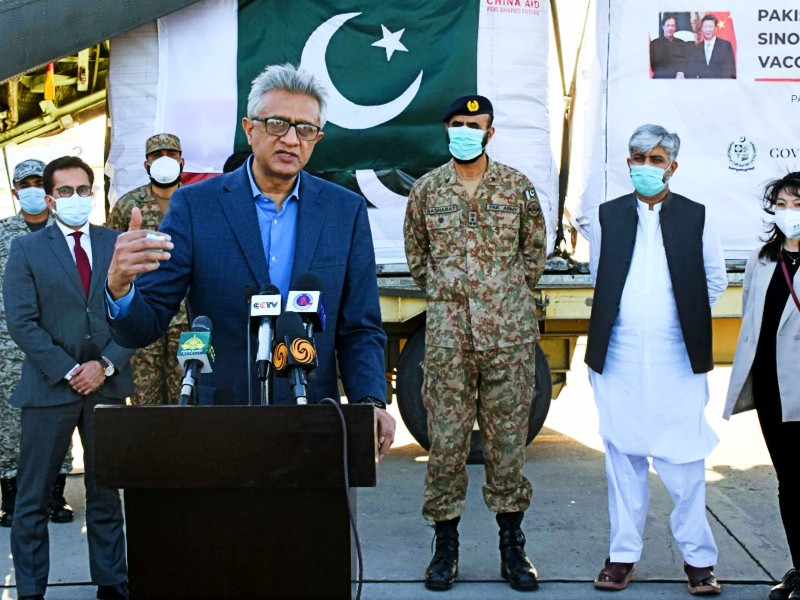 An official told a National Assembly panel on Tuesday that the National Institute of Health (NIH) is going to make Pakistan’s own single-dose coronavirus vaccine soon. “We are going to make a single-dose vaccine for Covid-19,” NIH Executive Director Major General Aamer Ikram told the NA Standing Committee on National Health Services. “We conducted the clinical trial of Chinese Covid-19 vaccine CanSinoBio in Pakistan.

The tests that were first conducted on 300 subjects are now administered in more than 150,000 laboratories,” he added. Later talking to the media, Major General Ikram said Pakistan was among the first countries to take part in the clinical trial of CanSinoBio vaccine. “Pakistan had requested China to transfer the technology for the vaccine. The raw material for the vaccine is going to arrive this month. “We hope that we will be able to take some measures for preparation of the vaccine by the end of April. The NIH has procured all the equipment and chemicals needed in this regard.

Read Covid-19: give me fresh air to breathe, please!

“Our team is ready to undertake this task while a Chinese team has also arrived in Pakistan. The Chinese team will oversee our team at the NIH,” he said. Earlier briefing the parliamentary panel, Maj Gen Ikram said the NIH Act is also being amended to restructure the organization and make it more vibrant. “Under the new law, there will be seven executive directors and one chief executive director. Employees of the departments merged with the NIH will be able to get a golden handshake within three months.”

He said the NIH has now set up a disease center in every district of the country. The plant which was closed a few years back has been made functional again. “Once the new plant is ready, the process for manufacturing the Covid vaccine will begin. The NIH is going to make its own single-dose vaccine in the near future,” the official said. He said the NIH does not get any funds from the Ministry of Health. “We spent Rs20 million on salaries. All the experts have been included in the NIH board,” he added.

The NA committee lauded the NIH’s efforts and declared it good news for the nation. Special Assistant to the Prime Minister on Health Faisal Sultan told the committee that Prime Minister Imran Khan has directed him to resolve the issue of three government hospitals in Karachi in consultation with the provincial government of Sindh. “If the Sindh government wants to run the hospitals, then we have no objections. We are bound to follow the Supreme Court’s orders. Now we will work together to find a solution in accordance with the law. We want to further improve the institutions,” Sultan said.