Supreme Court judge Justice Qazi Faez Isa on Friday blamed the people who trampled upon the Constitution for the separation of East Pakistan from the country.

“We have half of the Pakistan that the Quaid-e-Azam left us with,” he said while delivering his address a conference titled “Fundamental Rights and Constitution” organised by the Islamabad High Court Bar Association.

“Those entrusted with the duty of protecting the Constitution violated their oath because of their greed,” he added.

He observed that protecting the Constitution was obligatory upon every Pakistani.

The judge maintained that treachery with the Constitution was an act so unforgivable that the person who committed it would be punished in this world as well as in the hereafter.

“[Without the Constitution], the federation would break up and the state or concept of being Pakistani would also come to an end,” he added.

The Supreme Court judge noted that it had been 50 years since the Constitution was written down, but unfortunately nobody had bothered to read it or its interpretations.

“I don’t think the Constitution is taught in any school,” he pointed out.

The judge noted that the Constitution had provisions that protected the rights of citizens.

“The Constitution doesn't permit the arrest of anyone without cause.”

The senior judge noted that the Quaid-e-Azam and his associates had introduced an Islamic system.

“Spying is forbidden in Islam. Those who take oath must abide by the Constitution.

Also read: I am standing to uphold dignity of institution: Justice Isa

The judge regretted that the Constitution had not been implemented in Pakistan.

“Every person who comes to power bends the Constitution to serve their personal motives.”

Justice Isa noted that the violation of the oath falls under the category of treason and was punishable by death under the law.

“Many constitutions came and went in Pakistan, we learned a lot but just not the Constitution,” he said, adding that the interpretation of the Pakistani Constitution in the national language was necessary.

“Pakistan was founded by the Quaid-e-Azam, the largest Islamic country in the world. Today, half of that remains because East Pakistan separated from us,” he noted.

Justice Isa noted that the world had moved forward and we were still stuck at telling citizens to abide by the Constitution.

“Every person, who is holding a responsible office in Pakistan takes an oath on the Constitution which they are obliged to abide by because we have sworn to do it,” he added.

“If the Constitution is removed then the federation also no longer exists.”

The apex court judge maintained that if we did not abide by the oath, our problems would increase.

“Every person of authority, including me, who has taken the oath, must abide by the Constitution.”

Justice Isa pointed out that there was nothing in the Constitution that was in contradiction to the Holy Quran.

“Of the provisions in the document, only around a dozen are related to citizens' rights,” the judge noted.

“If they were aware about those provisions, their lives would be much easier.” I am standing to uphold dignity of institution: Justice Isa 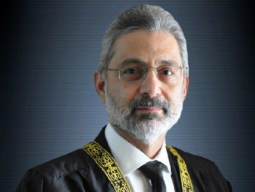 Govt is afraid of the truth: Justice Isa